Vs System 2PCG: The Predator Battles Preview – The Prey

Welcome to the first look at the Vs System® 2PCG®: The Predator Battles. In the Predator movies massive, wicked alien super-hunters hunt human beings for sport with a plethora of hi-tech weapons. It’s not great for the humans. They have cloaking devices. But we have spirit! And it is that spirit that allows a few lucky souls to survive and even defeat these intergalactic warriors. Today we’re going to take a look at some of these plucky victims, and survivors – The Prey.

In the first film, Predator, Dutch and his team of special ops soldiers are in a Central American jungle, searching for a kidnapped VIP. A key member of his team is Billy Sole. 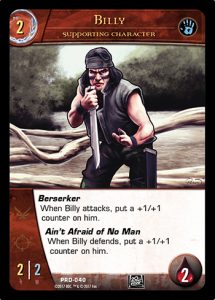 As you can see, Billy enjoys every part of conflict – attacking and defending. This is not an uncommon sentiment among Dutch’s team members. Like Blain, who’s as Tough as they come. 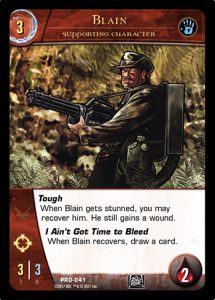 As the Predator harasses the team, Dutch figures out that the Predator sees in infrared. And if he can hide his body heat with a coating of mud, he might be able to turn the tables.

Ten years after the first Predator visited the sweltering jungle, another came to our planet to test his mettle in a concrete jungle – Los Angeles. But instead of soldiers, this Predator encountered a different type of warrior. 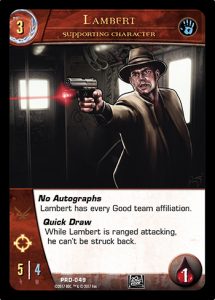 Lambert is as cocky and talented an L.A. police officer as there is. He transferred into the most dangerous precinct on purpose. He can work with anyone (although they might not want to work with him). But is he totally prepared to face a Predator?

Yet there is someone who is not only prepared, he is actually seeking a direct confrontation with the Predator. 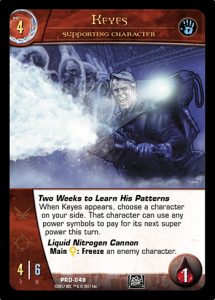 Peter Keyes is the head of the Other World Life Form Taskforce (OWLF), a top-secret government unit whose goal is the live capture of a Predator. His team has some cutting-edge gear and tactics to aid in this goal.

(NOTE: Keyes can choose himself with his keyword power Two Weeks to Learn His Patterns. And in case you weren’t sure, Freeze keeps a character from readying for a turn.)

It was many years before humans encountered Predators again. And this time it was on their turf, in Predators. A group of killers of every stripe is transported to a hunting ground planet for a team of bigger, stronger Super Predators to play with. One of these killers is an elite sniper for the Israeli army. 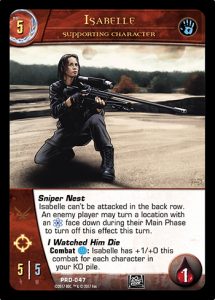 (NOTE: An enemy can turn down a “wild” location of their team in order to take a shot at Isabelle.)

It is interesting to note that this set is only our second foray away from the colorful world of costumed heroes. And if you couldn’t tell from the previous cards, it’s a little darker here. 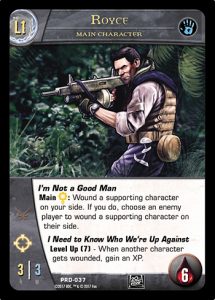 And I didn’t say it was a group of team-oriented killers in Predators — Royce is as ruthless as they come. 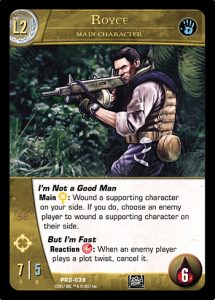 Royce’s fighting skills and instincts are almost supernaturally honed. He’s incredibly hard to get the jump on –not to mention be on a team with. Perhaps the Super Predators made a mistake snatching him for their playground?

We hope you enjoyed this sneak peek and join us next week for a closer look at the Yautja – The Predators themselves.


Now these look like some bad ass cards.
I can’t wait to get my hands on these.