For over 75 years Marvel Comics have been dazzling their readers with astonishing tales and incredible characters. Over that time some characters have changed costumes, shape, and even gender, but under it all they are the same person. The Uniqueness rule of Vs System® 2PCG® limits players to having only one copy of a character on their board at one time. 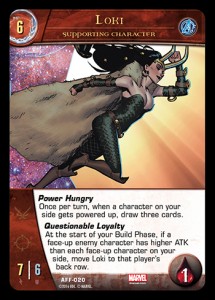 Even when characters change teams, sides, or their codenames, the person under the mask is still the same. The AKA rule of the Vs System® 2PCG®: A-Force set gave the same one character limitation, for characters like Phoenix / Dark Phoenix and Captain Marvel / Ms. Marvel. 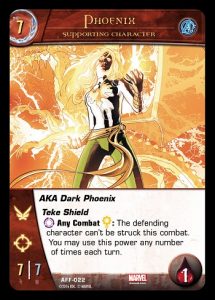 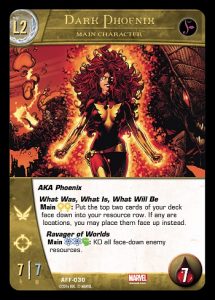 So what happens when two people share the same codename or ‘mantle’? In Vs System® 2PCG®: Legacy a new Hawkeye is introduced. Kate Bishop has taken up the Hawkeye mantle from Clint Barton creating an entirely new character. In cases like this, the newer character will have one or more pairs of stars around its name to differentiate it. 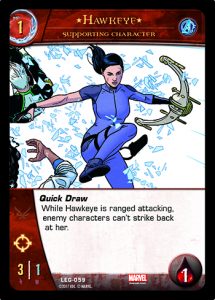 Here’s how the rules of sharing a mantle work:

We hope you have enjoyed today’s Vs System® 2PCG®: Legacy card preview. Tune in next time as we delve into the consciousness of your character.

If you missed our other Vs System® 2PCG®: Legacy previews, you can find them in the links below.