Welcome to the first preview of the Vs System® 2PCG® Legacy expansion.

This expansion increases the options for the existing eight Marvel teams. Each team will gain a new Main Character, some new Supporting Characters, and a powerful new Plot Twist.

We’re also taking this opportunity to make changes to some older cards due to game balance and have reprinted them for this set. We’ve already announced that the Thanos Main Character (CLICK HERE) has been given a tougher Level Up power and a weaker Infinity Gauntlet. One other card will also be replaced in this set: 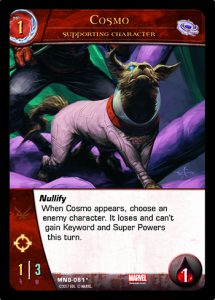 Since the beginning, Cosmo has been almost an auto-include in most decks. We feel that the new power level of Nullify will keep him desirable in some decks but not all. As with the Thanos Main Character, the original Cosmo card will be banned and replaced with this new version for tournament play.

When we made the very first Vs System® 2PCG® set we had to make some tough calls on which Main Characters to include. We’ve been looking forward to adding Cyclops, Drax, Jessica Jones, and today’s preview to the mix: 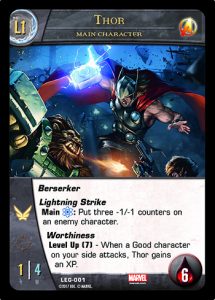 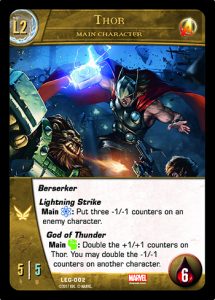 As you can see, Thor has the Berserker power which has previously been found only on Supporting Characters. Each of the eight new Main Characters in this expansion will have their own Keyword power (as well as the usual complement Super Powers).

We hope you’ve enjoyed today’s preview. Tune in next time as we add some support to these amazing teams.


The Cosmo nerf is very welcome. This keeps him useful as a potent tool, but he’s no longer so strong as to be nearly everywhere.


[…] Preview time Everyone! In case you missed the Upper Deck blog last Friday, check it out here! Big change to Thanos and […]


Do you have any information when pretty ordering will be available? Thank you!