I was nervous on my flight last night, not because it was turbulent, but because there was a problem at home. The problem was simple, but troubling: I wasn’t going to be there in time to watch the start of the USC vs. Hawaii game. The first thing I checked upon landing wasn’t my voicemails or texts, it was the score on ESPN Mobile. I raced through the terminal and finally got to my car so I could at least listen to the first quarter on the radio. As I broke just about every conceivable traffic regulation on my way home, I finally arrived and all seemed right with the world.

I’m pretty sure college football is just about the greatest sport in the history of our great nation. The lack of playoffs in the sport is pretty terrible. I can’t stand people calling kids Heisman candidates the first few weeks of the season. I hate the need for compliance officers and sanctions levied against teams that didn’t commit them. But that’s about it. Other than that, the game is perfect to me.

If you don’t love it already, let me help you learn to love it. Here are some of the things you should appreciate about the greatness of college football.

ESPN’s College GameDay – The only thing I can think of better than waking up to ESPN’s College GameDay on a Saturday morning would be waking up next to the girl of my dreams. And speaking of the girl of my dreams, Erin Andrews is joining the cast of College GameDay. Thank God! Adding her to the team is like adding bacon to a cheeseburger, it just makes something great that much better. I love the back and forth between Kirk Herbstreit and Lee Corso, I love when they are joined by celebrity guests and I love trying to read all the crazy signs that pop up behind the team during the broadcast. It is fantastic television. 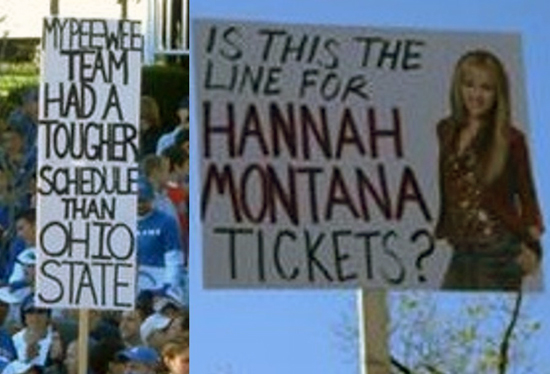 The signs that appear behind the crew on ESPN's College GameDay are hilarious.

College Football Overtime Rules – I hate the coin flip OT rules in the NFL. Give both tams a fair shot; college football does. Each team gets a chance. Yeah, the scores get crazy and records get broken, but guess what? That’s what we love as Americans. With each game so important, it makes for some very compelling television when the score is tied at the end of regulation. We saw proof of that just last night when Utah beat Pittsburgh in OT.

Mid-Week Games – It used to be you’d get a couple of Thursday night games a season, but they were usually match-ups between terrible teams. Nowadays we always get a premium Thursday night game, if not many. Then they pepper in games on Wednesdays and Fridays as well. And I’m pretty sure there are going to be Tuesday afternoon games this season. I don’t know what’s going on, but more is better and I just love every bit of it.

Angry Coaches – You get three or four of these a year and they are just the best. You know what I’m talking about; a coach just taking it from zero to psychotic at the drop of a hat. One of my favorites is just audio of Dan Hawkins of Colorado freaking out about a parent’s complaint that the boys are not getting enough time off. Enjoy…

Anything Can Happen – More so than the pros, anything can happen in college football,  especially during rivalry week. Man is that a great week, more so if your team wins. They say so frequently, “You can just throw the records out with these two teams” and you know what? It is absolutely true. You never know what is going to happen and the upsets that seem to come up every week make the game so much fun to watch.

Heading to Campus – The college football tailgate pre-party is just the best. The bands, the cheerleaders, the people, the food, the drink, give me it all. I’m in. I was at the Los Angeles Memorial Coliseum over the summer and ran into our new coach, Lane Kiffin. It’s great to be on campus. If you haven’t been to campus in a while, just go. You’ll have the time of your life, especially if your team wins.

Talking Smack – As a die-hard USC fan, people have been coming at me left and right about the sanctions levied against my team. A friend asked me, “How does it feel that your team had to forfeit all those games?” I said, “You know it’s really not that bad. You see, I was there and not only do I remember those victories, but I remember celebrating them. If I made out with a Playmate a couple years ago and then all of a sudden someone told me I didn’t make out with her, it’s okay. I know I did.”

And then there are the Notre Dame fans that seem to come at me all the time. To them I simply send them this diagram and smile. 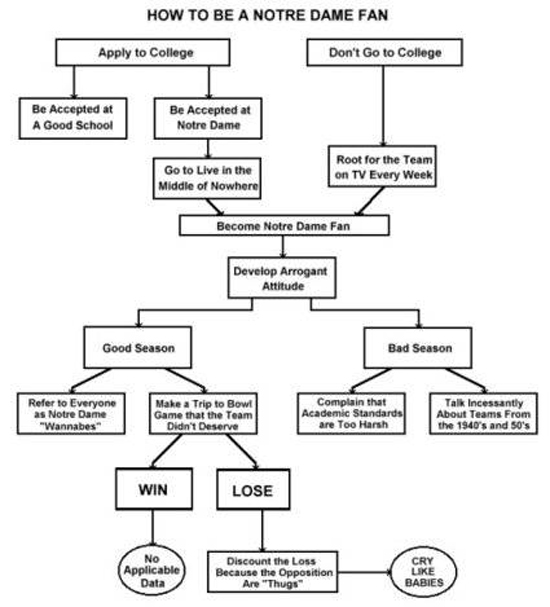 So get ready for a great season of college football and Upper Deck’s going to get you in the mood for it even more with the release of 2010 Sweet Spot Football on September 15. While players may move on to the pros, they will likely play for several teams, but they will only have one college team. That’s what makes the game so great and that’s why I’m so glad to have it back, but I’m sure I didn’t cover everything. What do you love about College Football? 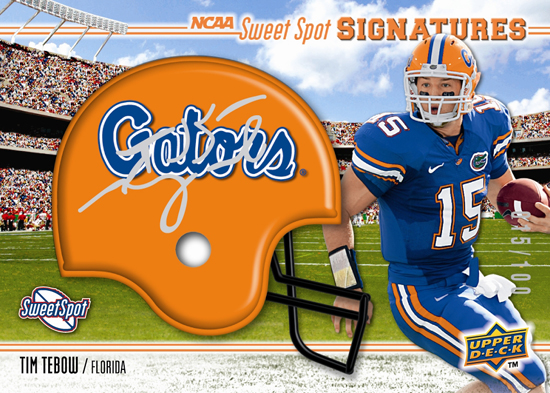 What will Florida be like without Tim Tebow? That and many other questions will be answered this season.