Football seems to be a magnet for inspirational stories, many of which have been made into some of the most successful movies of all time. Rudy, Invincible, and The Express all had a lot of box office success telling the story of the underdog coming from behind to beat all the odds. The problem with most of these stories is that they happened years, sometimes decades, agoand have little connection to the game of today. Luckily for football fans, a new movie with connections to a 2009 rookie has begun to make waves in Hollywood, as well as in the hobby.

The Blind Side, based on a book written by Michael Lewis, captured more than just the top spot in the movie world this past week. It brought fans from all around the world together to witness the retelling of a truly amazing football story. What makes this even more interesting is that Michael Oher, the subject of the film, was drafted this year by the Baltimore Ravens. Oher was a standout tackle at Old Miss and after a troubled childhood where he grew up in very poor conditions, he surpassed all expectations by being a first round draft pick at number 23.

In fact, when the Vikings were on the clock at 22, I was crossing my fingers that they would draft Oher to shore up the right side of their offensive line. After being drafted with the next pick by Baltimore, Oher showed me exactly why his story makes him so attractive toNFL teams. As the last person in the draftee green room, Oher had fallen below expectations. Yet, instead of acting like a primadonna, he said a pretty profound thing. Referring to his draft position, he said, “I am just happy to be here. I could have been the last pick of the last round, and I would still be happy just to play in the NFL.” I was stunned. Some rookies have had a stereotypical “me first” attitude in recent years, but Oher was everything but a confirmation of that generalization. I wanted him on my team, and the commentators shared my sentiment.

Being the subject of a blockbuster movie does have its advantages, regardless of where you are drafted, and luckily Upper Deck realized this potential coming into the 2009 season. They featured Oher on a plethora of autographed cards, most of which have sold like hotcakes on eBay during the lead up to the film. Now that the film has brought us to emotional levels we felt during other amazing football films, those autographs are even more important.

Here are a few of my favorites so far:

As a Tackle, Oher did not attend the 2009 Rookie Premiere, so this card uses a great shot of him playing for Ole Miss. It’s a cool design, and the game shot is awesome, which has led to some great prices for this card on eBay. It recently sold for around 45 bucks, more than I have ever seen for a guy who doesn’t play QB, RB, or WR. 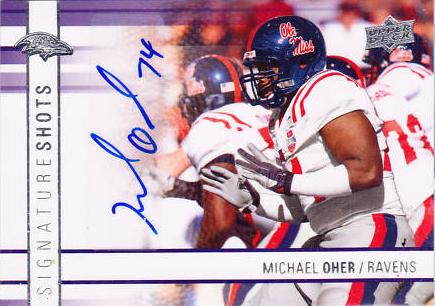 I absolutely love the retro look of these cards, and the hard-signed signature makes this even more desirable. Oher is definitely looking like a brick wall, and his autograph is a perfect compliment. I know a few Ole Miss and Ravens fans have already emailed me about this card, and I agree that it is one of his best of 2009. 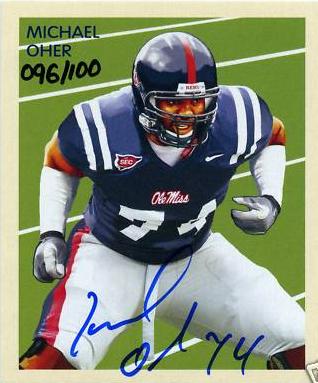 I was wholeheartedly surprised by how cool the cards out of 2009 UD Draft looked, and the hard-signed auto makes it that much better. Oher has another great game shot on this card, playing for Ole Miss and looking intense. This card is one of the more valuable ones in the set, usually selling on eBay for around 40 bucks. It’s a great card to pick up for sure.

The letters in 2009 SP Threads are a great addition to any collection, and it is for sure Oher’s most expensive card. Signed directly onto Oher’s Ole Miss letter nameplate, this type of card is always a favorite of collectors. It usually sells for around 80 bucks since the release of the movie, and is rarer than most of the other cards he has. If you are a high-end collector, or even a movie memorabilia collector, this is your card. 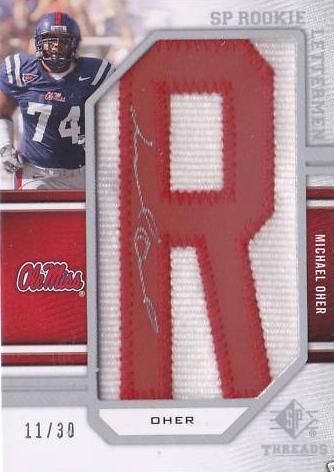 When you think about the impact that inspirational movies have on our lives, Oher’s story is definitely one that gives you a great push in the right direction. The kid just never gives up, and so far this year, he has done a great job proving he will be a great player for years to come. Even when the Vikings played Baltimore a few weeks ago, Oher again was the center of attention, corralling QB wrangler Jared Allen for just about the whole game. That takes a lot of talent, and Oher displayed incredible skill to outplay one of the league’s best. Im sure Joe Flacco’s blind side thanks “Big Mike” for that.