Peterson and Johnson Dominate the Running Game in 2009

When it comes to running backs in 2009, there are two names that immediately spring to the forefront of the list. First is Adrian Peterson, who has followed up two amazing seasons with 14 TDs and 1,100 yards so far this year. The second is Chris Johnson, who has treated the NFL like his personal Nascar track, chewing up 1600 yards on the ground in addition 11 rushing TDs. When it comes down to talent and production, both have had it oozing from their pores every time they step on the field, and the hobby has definitely reflected that success. Given that, I wanted to take the time to analyze each player and talk about what they mean to their teams, to their cards, and most of all, to their future potential in the NFL.

Although Chris Johnson may be having an MVP caliber season, the Titans’ record is not echoing that particular accomplishment. Peterson’s stats, though not as good as Johnson’s are fueling a team that boasts an 11-2 record. Both have had great seasons, no doubt, but team performance may hinder how people look at both players. Peterson has had more TDs, but many have been from inside the 5 yard line, while Johnson is forced to score from further out due to lack of team offense. Johnson leads the league in plays over 40 yards, plays over 20 yards, and yards per carry, but Peterson is very close behind in all of those categories as well. Peterson may have more TDs, as I said, but he also fumbles more, which has been a concern for most of his career. Johnson only has one for the entire year, where Peterson has six. On the receiving end of things, Johnson also leads with 42 receptions to Peterson’s 36. Johnson has added two VERY long TDs as a receiver to his resume, where Peterson has yet to cross the goal line after a catch.   Peterson may not have the stats, but his team has the wins, ironically making a case for Johnson as he has a lack of weapons around him. Round one definitely goes to Johnson, though 2010 should be an interesting year for both him and Peterson.

When it comes to the cards, Peterson has established himself as one of the most sought after players in the hobby, even above some people who have been around for years. His autographs are the most expensive of any active player with few exceptions, including his forever young teammate, Brett Favre. Johnson is still an up-and-comer in that respect, though his rarer cards have begun to climb into the Peterson tier of value. Although Johnson’s rookie year was great, he didn’t have the level of exposure that someone like Peterson had, mainly because of the NFL record set by Peterson midway through 2007. I also think that the Vikings are a more nationally covered team, as Tennessee is still a very small football market. Due to this lack of fan base for Johnson, his cards may not have the same demand as they would if he were playing somewhere else.  However, now that he is putting up seemingly 150 yards a game, Johnson’s value potential is sure to change. 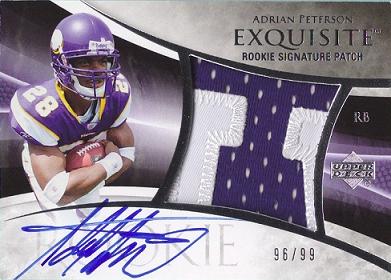 Peterson’s best card around is definitely his Rookie Patch Autograph, released in 2007 Exquisite Collection. I commented before that this card was still fetching over $1000 dollars on the open market, a surprising fact considering that most of that value was obtained during his rookie season. Johnson’s Exquisite, though valuable, is still well below Peterson’s in terms of worth. That doesn’t mean the card isn’t as important, but its something that should be factored in. Another interesting point is that Peterson’s card is numbered to 99, where Johnson’s is numbered higher. Due to a discrepancy in production, it’s possible that a true comparison is tough. His Exquisite parallel has broken the $500 mark on a few occasions, and that is numbered to 75. The problem is that collectors value the non-parallels a little more, again making a comparison hard to come by. Regardless, round two goes to “All Day.” 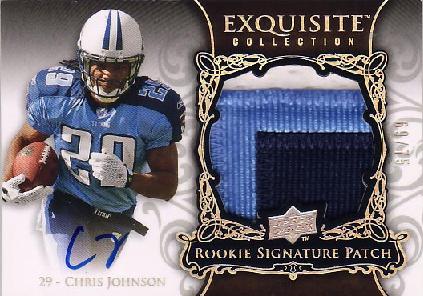 Lastly, I want to look at future potential, which is the measuring stick that many of the collectors use when making purchases. Both players have enormous potential, though some factors may limit the final lines when all is said and done. First, Peterson is now entering his third season of massive production on a team in a tough division. Johnson has had two great seasons, but the overall body of work is not necessarily as impressive. To put up close to 4,000 yards in your first three seasons with over 25 TDs is a feat not equaled since the times of Dickerson, Payton and Sayers. Due to the new “running back by committee” systems employed by many teams, it may not happen again. Johnson has a good chance of getting there, but Peterson is already there and past it. His potential has largely been fulfilled. Peterson has already been compared with the likes of Hall of Famers Barry Sanders and company and is on his way to a storied career, barring any injuries. This is where Johnson has the leg up, as he has yet to have a major injury, while Peterson has already had one knee surgery, a shoulder problem in college, and a few ankle injuries here and there.

Considering how great of a season Johnson is having, it’s especially difficult to overlook the massive potential in Johnson as well. Unlike Peterson, he has made receptions out of the backfield a major part of his arsenal from the beginning, something that Peterson has only recently worked on. In addition, Johnson does not have the luxury of receivers like Berrian, Rice, and Harvin to help him carry the load, and Vince Young is still a very young and untested part of their offense. In Minnesota, Favre has made life easier for his team, and Peterson’s TD totals have reflected that situation. Even though I cheer for Peterson each week, this one is definitely a tie.

Overall, I can honestly say that each player deserves all of the respect and fear that they garner. They are tremendous players and will continue to excite for as long as they are playing. I don’t think either is a bad investment in any way, shape, or form, and luckily for collectors, they are prominently featured in just about every Upper Deck product. With Ultimate, SP Authentic, and Exquisite on the way, the end of the year is going to be a feast for Peterson and Johnson fans alike. Plus, if recent games are any indication of what is going to be in store for the rest of the 2009 season, those fans are going to have quite a few people to compete with in buying their favorite cards. I wish you all the best of luck because I will be one of those fans.