Entering the 2009 NFL Season, many fantasy football owners had a pretty good idea of who they were going to draft. Some people were going to attempt to draft the same exact team that won them a championship last year, while others were looking to improve on their record by stacking their team with fantasy heroes. A fantasy hero is a player who can carry your team week in and week out; the only problem is that these players change drastically from year to year. So, people end up disappointed when they successfully draft their championship team from a year ago, only to find themselves with a 0-4 record heading into Week 5. It’s not too late to salvage your season, but you must do so without your heroes of the past.

Last season, Chicago running back Matt Forte surprised the nation, and was one of the most coveted running backs by Week 4. He rushed for 1,238 yards and 8 touchdowns while hauling in an additional 63 receptions for 477 yards and four touchdowns. Forte proved valuable because he got points for both rushing AND receiving. The only other running backs who add this same type of value to your team would be LT and Brian Westbrook. Well, if you did any type of homework in the offseason, then you know about all the concerns surrounding the health of both superstars. So, you may have made the right decision in staying away from these two backs. You also may have concluded that Matt Forte would be the next-best option. This is where a lot of people went wrong. 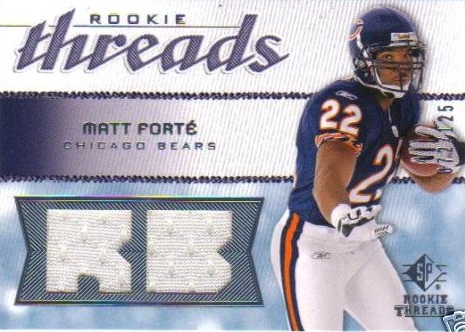 As I mentioned earlier, fantasy heroes change from year to year. The year Forte had last year as a rookie was borderline unbelievable. But, to think that he could somehow replicate last year was simply wishful thinking. Let’s evaluate his situation and see where many people went astray.

Kyle Orton was the quarterback for the Bears last year. Ever since Orton has started at Purdue, he has been the type of quarterback who relies heavily on his running backs and tight ends. This is the reason that Matt Forte and Greg Olsen had a combined 117 receptions! With the addition of the Pro Bowl quarterback Jay Cutler, many people felt this would help Forte’s numbers. In actuality, people couldn’t be any more wrong. A running back in the same backfield as Cutler has never caught more than 17 passes since his freshman year at Vanderbilt! In essence, Cutler hurts your running backs more than he helps them.

So, if you’re holding onto Forte in your leagues with the mindset that he is going to wake up soon and once again become that fantasy hero, I wouldn’t count on it this year. I am not saying he won’t be good, but I am saying that he is nowhere near as valuable to your team as he was last year. Here’s some advice: Be the proactive one who picks up Knowshon Moreno (if he’s still available), or Correll Buckhalter, or any Denver running back for that matter, since they are in the same backfield as Orton. I can guarantee that by the end of the year, the production from Denver’s running back(s) will exceed that of Forte’s by at least 40 fantasy points.