A Card Collector Goes Full Circle and is Hooked Back on the Hobby! 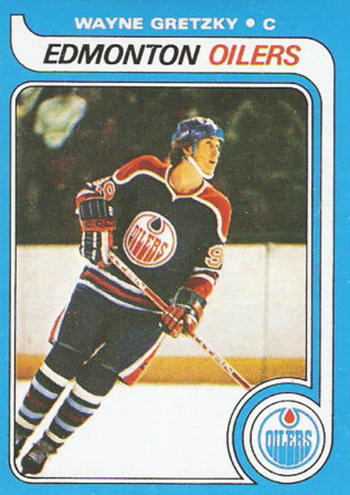 When I was a kid, that was the ‘holy grail’ of cards, and we all either had one or knew someone who had one that they had used in the spokes of their bike. I actually had Gretzky’s sophomore season card along with an almost complete set of O-Pee-Chee cards from that year. When I sold that box of cards during my university years, they still had the smell of the gum on them. That was the only card collecting I had really done until I went off to university.

In late 1990, during my first year away at school, one of my classmates took me to a card shop. He was an avid hockey card collector and was looking for some singles. Card collecting was experiencing a ‘boom’ of sorts so I figured, “What the heck?” and purchased a few packs of Upper Deck NHL cards. As soon as I opened that pack of cards, I knew I was in – and when my dad saw them, so was he. Between the two of us, we collected that entire set of 1990-91 Upper Deck NHL cards and continued to collect for most of my university years.

On top of hockey, dad also got into the baseball cards while I poured my efforts into the first set of Upper Deck NFL cards. I had played football growing up and into my collegiate years and so when I saw Upper Deck had an NFL set, I pretty much spent every spare penny on cards, card packs and boxes. Back then, the ‘promo cards’ were the big finds and knowing my love for the game and the cards, my parents bought me those promo cards from Joe Montana (my idol) and Barry Sanders for Christmas that year. To this day they are among my most prized possessions. 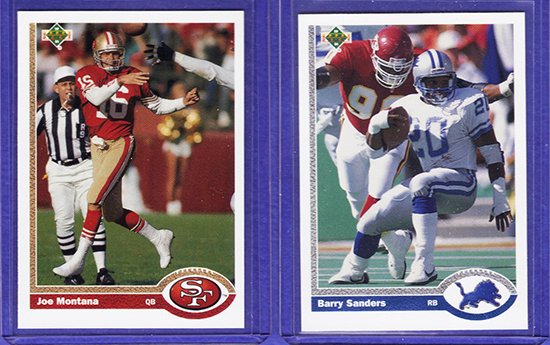 After finishing that first set of NFL cards, I pretty much stopped collecting – save for the odd UD McDonald’s cards set here and there. Life had presented other priorities in terms of my work and career.

Fast forward 20-years. I get a text message from my dad telling me he and my stepmom were going through a bunch of old boxes and found all the old cards we had collected separately & together – neatly sorted complete sets of baseball and hockey. “You will have a lot of cards to go through one day,” he said in the text.

And that got me to thinking. I told the story to a friend of mine and he explained to me his passion for collecting baseball cards back when he was younger. I started thinking about the joy of opening those packs, the frustration and satisfaction of completing a set, the promo cards and how much fun it was to just see what a card is worth. So, while out shopping with my wife I snuck away and grabbed a few packs of cards – just to see if the bug would bite me again. 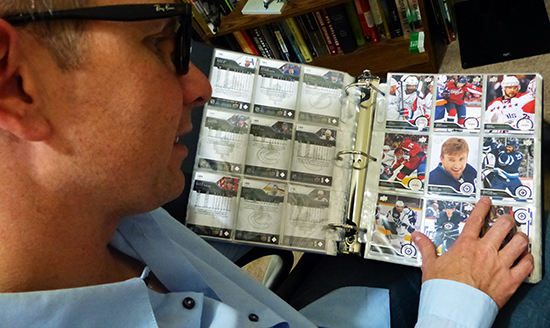 When I opened that first set of 2014-15 Upper Deck Series One NHL cards, I was immediately blown away. I’ve always been an Upper Deck guy, ever since those first hockey cards in ‘90-91. I just liked the design, the feel of the card, the photos and just the simplicity of the layout. As someone who works in media, I pay attention to those things more now than I did then and even looking back at those older cards, they are just eye-catching for me. The 2014-15 Upper Deck NHL cards trump those ten-fold.

Since picking up those first packs a couple months ago and getting back into collecting, I have poured my efforts into completing the 2014-15 Upper Deck NHL Series 1 and 2 sets, which is not an easy thing to do when you live in Miami, FL. I am happy to say I’m 75% done with both sets.

I have come to realize that a “complete” set of cards is much different than it was two decades ago as there are a variety of inserts and shortprints that are nice to have, but very difficult to capture all of. For me, I’m content with complete sets of the base cards. Of course the insert sets and shortprints are where the money is, but I don’t collect to try to make a buck. I’m collecting because I love the cards, the sport, the thrill of opening those packs, sorting the cards and reliving memories while making new ones. 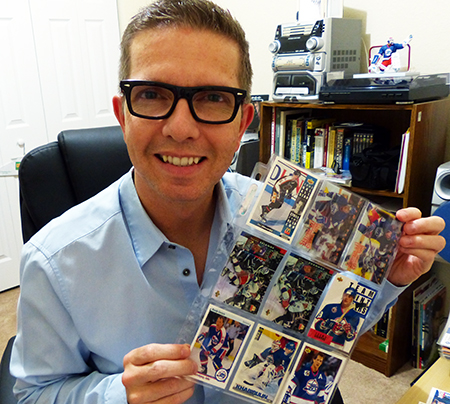 I have my cards already sleeved and in my office. I cannot tell you how many times I have stopped what I am doing to just have a peek at them, admire them and enjoy them all over again. Yep, I am hooked.

Next year, I may even be able to convince my dad to collect another set of hockey with me, just for old time’s sake!

Jeremy St.Louis is an on-air host for beIN Sports USA an international sports network based in Miami, FL. He has a not-so-secret passion for the Winnipeg Jets & the game of hockey. He also loves interacting with fans via twitter (@jrstlouis).