“For us creating the Diamond Club wasn’t just about making sure end-user consumers are loyal to our brands, it’s a way to help mom and pop hobby shops to continue to survive,” said Chris Carlin, Upper Deck’s hobby marketing manager. “Several years ago we began to recognize a trend where some shops were going out of business simply because they lost that large collector who helped keep them going. Quite frankly those large collectors didn’t feel like they were being recognized. By creating a program where we can develop a relationship with customers like that, it helps to keep them engaged to not only our products, but also to those stores.”

Upper Deck has held past events in Las Vegas, San Diego and Chicago with special guests like LeBron James, Gordie Howe, Drew Brees and Bo Jackson.  This year Upper Deck pulled out all the stops by bringing in the leader of America’s Team, Tony Romo on Saturday night at a private meet and greet at the Sports Museum of Los Angeles. On Sunday, Upper Deck brought in Hall-of-Famer and 3,000 Hit-Club member, Rod Carew to sign autographs and spend time with the members.

There is a lot that goes into the weekend besides these special athlete experiences however. The company started off with a welcome reception at their retail location in Huntington Beach on Friday afternoon. Members were then surprised as Upper Deck’s CEO and owner, Richard McWilliam stopped in to spend some time with each of them. Members asked questions and he took the time to personally shake their hand to thank them for their support. 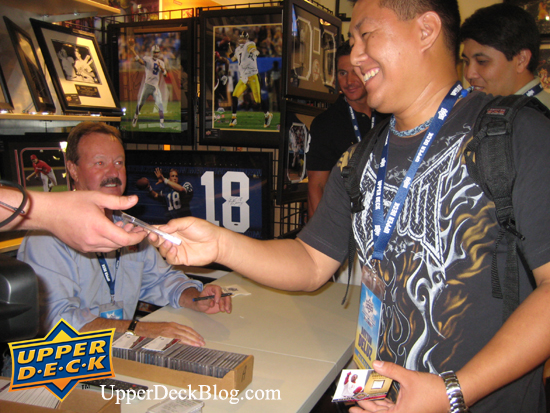 From there they were whisked away to take in the Angels/Yankees game. Upper Deck arranged to have two members actually go on the field for batting practice, getting them even closer to the action and to their heroes. 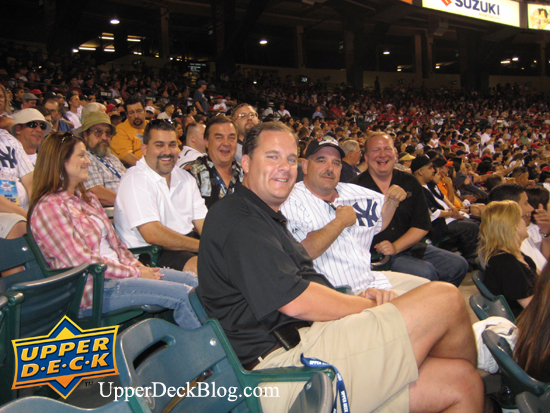 Upper Deck Diamond Club members take in the Angels/Yankees game Friday night. The Angels came from behind to defeat the Yankees 10-6, but one Diamond Club member still showed his support for his beloved Yankees by showing off his Jeter jersey.

Saturday began with breakfast and then Upper Deck’s Diamond Club visited PSA Headquarters in Santa Ana, where members received a tour on how the company grades trading cards, memorabilia and more. It also was a time where Upper Deck could show off future releases and get feedback from the members on the content and designs.

“This is really an important part of the weekend for us,” said Grant Sandground, Upper Deck’s baseball brand manager. “When we go through new products and show them images of the cards, we take a lot of their feedback to make the tweaks we need so that product is a hit with collectors. As we went through the new releases like Goodwin Champions Baseball and a new product called Prominent Cuts, the responses were all very positive so it looks like we are on the right track.” 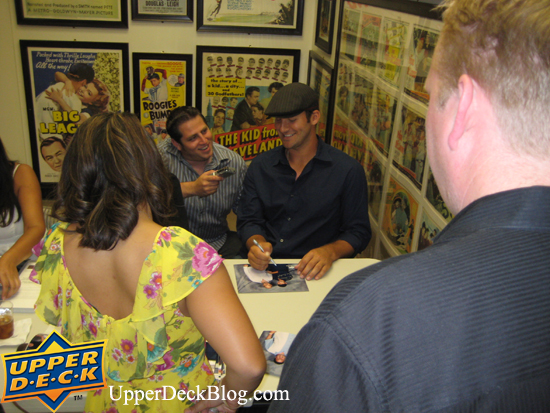 Tony chuckles while talking with reporter Jon Gold about the event while he signs photos for the members.

The weekend finished with the two special athlete experiences. Upper Deck arranged to bring in Tony Romo and Rod Carew exclusively for this special event. Members were blown away by how engaging both players were.

“During these special events, it’s almost like Upper Deck makes the trading cards come to life for these customers,” said Carlin. “We are lucky to have partnered with some quality spokesmen. When you have a star like Tony Romo asking if he can stay a little longer to mingle with the customers and check out the museum, you know you’re working with someone special. He even went so far as to call the children of one of the members who could not attend, he’s just a really quality individual.” 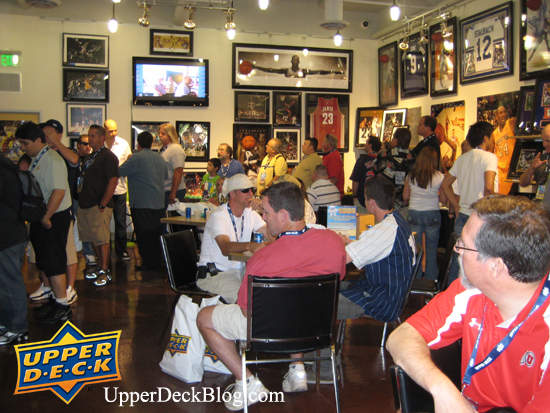 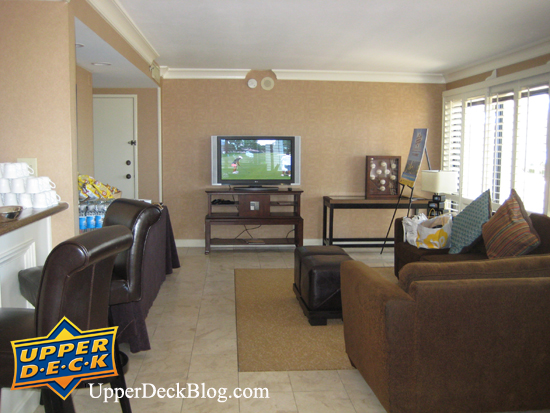 Upper Deck set up a hospitality suite for members where they could relax, open product, spend time with UD staff and just get to know other collectors like them. 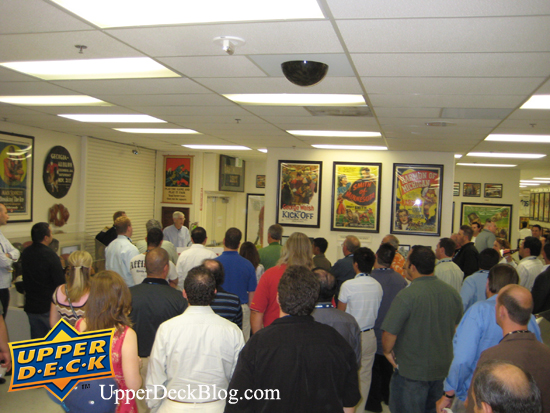 Gary Cypres, the founder and CEO of the Sports Museum Los Angeles, answers questions for Diamond Club members about the amazing collection they had the opportunity to view on Saturday night. 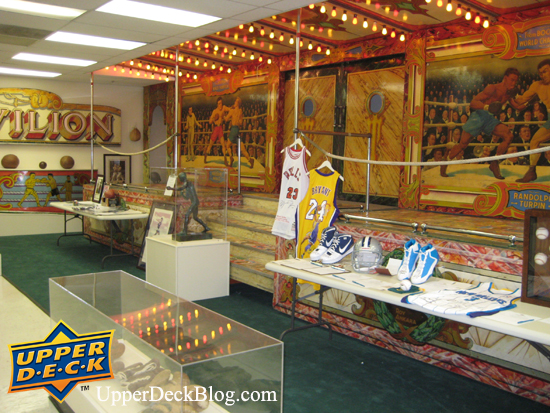 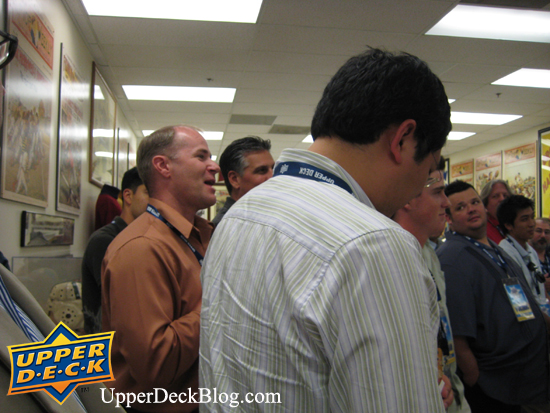 Upper Deck Diamond Club members got to ask Tony questions about everything from the difficulty about having a documentary filmed on the team during training camp to what it’s like to play for Jerry Jones. 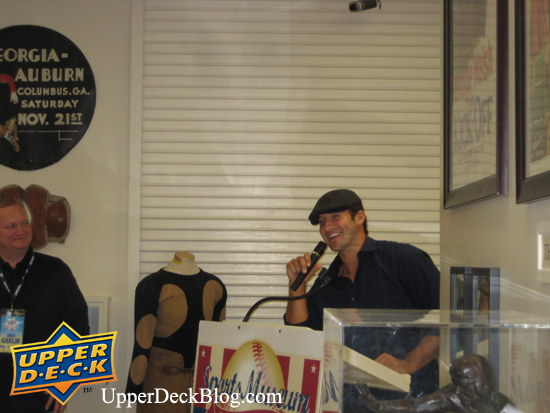 Romo smiles as he talks about his father giving him some advice when he was younger about the different roads you can take in your life. That guidance has obviously served Romo well. 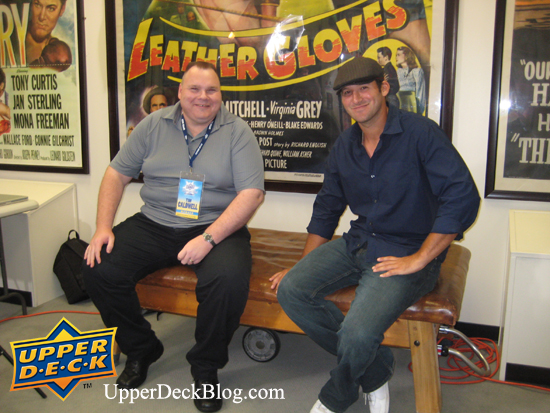 Tony stops to chat a bit with an Upper Deck Diamond Club member who came all the way from Mississauga, Ontario for the event. 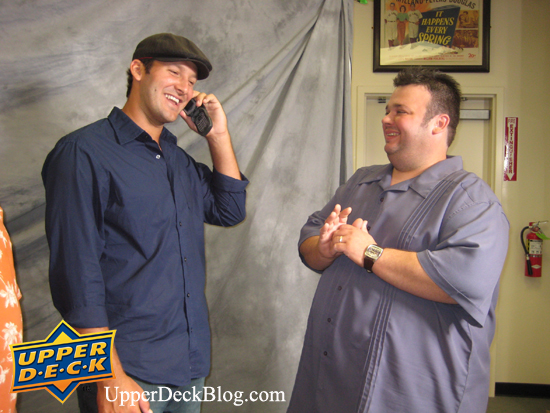 Tony actually called the children of Upper Deck Diamond Club member Ted Vucinic as they were unable to attend the event. Talk about “Reach Out and Touch Someone”! 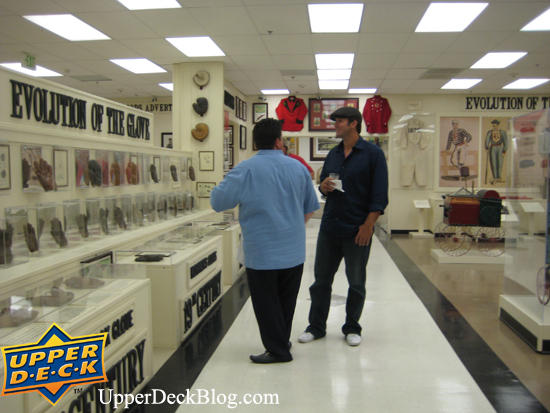 After signing, Tony mingled with members just taking in all the amazing exhibits at the museum. Upper Deck Diamond Club member Keith Spizzirri and Tony Romo talk about how far Baseball has come as they look at the evolution of the baseball glove. 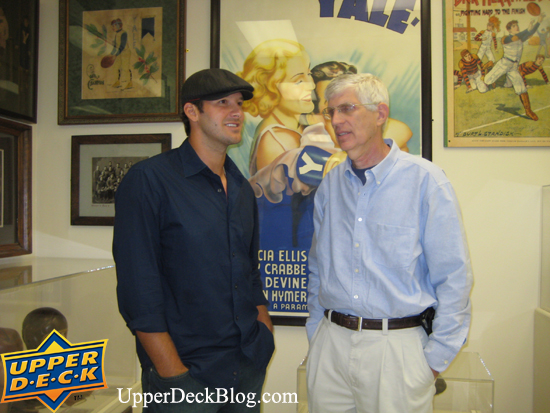 Tony Romo listens to Gary Cypres talk about some of the amazing collection he has amassed at the Sports Museum Los Angeles. 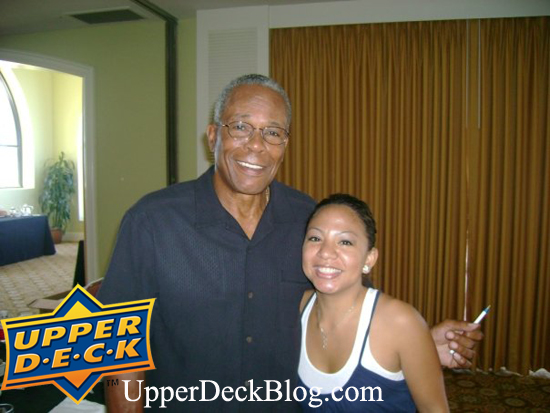 
How in the world can I attend this event?!!!


[…] Deck collectors who open high volumes of the company


[…] past weekend, I had the privilege of attending the 2009 Upper Deck Diamond Club Summit in Huntington Beach, CA. The club meets for an annual summit that offers members the opportunity to meet Upper Deck staff, […]