The Diamond Club Summit: From a Member’s Perspective

This past weekend, I had the privilege of attending the 2009 Upper Deck Diamond Club Summit in Huntington Beach, CA. The club meets for an annual summit that offers members the opportunity to meet Upper Deck staff, other like-minded collectors and usually a premier athlete or two. I was honored in 2008 when I was given the opportunity to become a member of this elite fraternity of collectors based on my passion for the hobby (including my Jay Cutler super collection) and my support of Upper Deck’s products.

This was my first time visiting California, so I was unsure of what to expect. I was greeted by our Diamond Club concierge when I checked into the hotel right on the beach where I received an uncut sheet of Michael Jordan Legacy jersey cards. While they didn’t have the jersey swatches in them, it’s an amazing piece that is going to look great framed.

Shortly after check-in, we boarded a bus and were on our way to the Upper Deck Retail Store in Huntington Beach where the doors were closed to the public for our private event. I found myself in awe as I walked through the doors. I couldn’t believe the amazing memorabilia pieces displayed throughout the store. It was like a showroom. 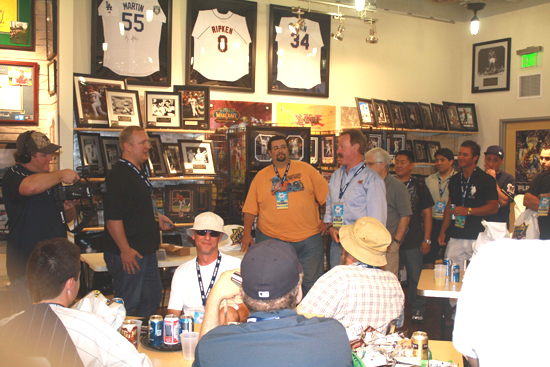 Upper Deck announced that none other than Upper Deck CEO and owner, Richard McWilliam, would be joining us for an autograph signing. McWilliam signed the cardback of a special 2009 20th Anniversary jersey card of Ken Griffey Jr. for every member in attendance. It was great to spend a few minutes with the man that started this great company; for serious collectors like us, it was almost like meeting Willy Wonka. 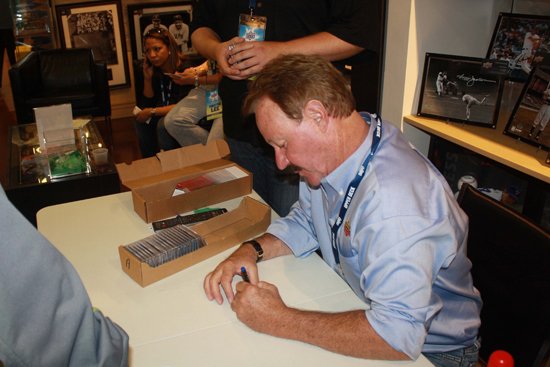 After a few hours, we headed to Angel Stadium to watch Derek Jeter and the Yankees take on the Angels. The atmosphere was electric at this beautiful ballpark. As always, the passionate Yankees fans made a great showing so there were plenty of pinstriped jerseys out that night. The Angels crowd was very supportive of their team however, and didn’t let the Yankees fans drown them out. It was an exciting game with lots of hits and runs. Jeter had a great game at the plate, but the Angels came back for a dramatic 10-6 win on their home field. After the game, we headed back to the hotel and I was so excited for what came next that it was hard to sleep. 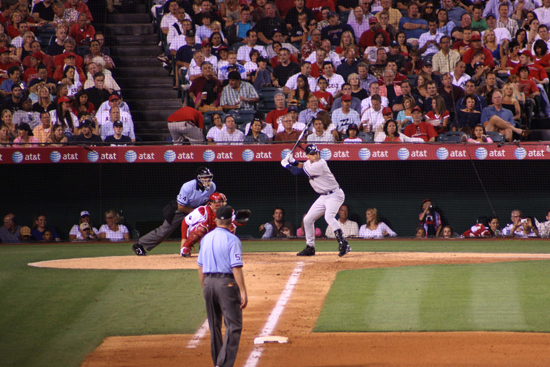 For me, Saturday was the highlight of the weekend. First, we had an appointment with PSA (Professional Sports Authenticator) in Santa Ana, CA. PSA offers authentication and grading services for cards and memorabilia of all kinds. We were greeted at their headquarters by PSA President, Joe Orlando. He gave us a brief history of PSA and discussed the services they offer to the collector. We were also given a sneak peek of PSA’s exhibit slated for the upcoming National Sports Collectors Convention in Cleveland. We had the opportunity to see almost the complete set of T206 baseball cards that looked to be close to mint condition. Other pieces included Babe Ruth signatures as well as the actual checks that were written to Boston for Babe Ruth’s transfer to the Yankees.

PSA officials offered a tour of their facility giving us a glimpse into their grading process. Club members were given the opportunity to try their hand at a few tests which included autograph authentication and card grading. The two members with the best scores respectively received a Joe DiMaggio PSA-authenticated autographed baseball and a 1989 Upper Deck Ken Griffey Jr. rookie card graded a PSA 10. It was great to get this behind-the-scenes look at PSA.

Upper Deck staffers conducted a meeting focusing on Customer Service and Marketing along with a preview of their upcoming sports products. This gives members a great opportunity to discuss the pros and cons of Upper Deck products and programs with the people who develop them. Our opinions were shared with those who design the products and select the content that will be included in every box. It was nice to be able to work with their staff on what we want to see in products, even though they have a pretty good handle on things. 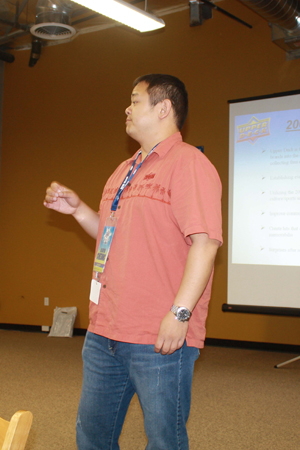 After a few hours of downtime at the hotel, the DC members headed to downtown Los Angeles to visit the Sports Museum of LA. My jaw dropped as I walked into the museum as it was like a collector’s paradise. This museum includes some of the greatest pieces in sports history and is the personal collection of Los Angeles business executive Gary Cypres. Some of the highlights of the collection included game-worn uniforms of Babe Ruth and Lou Gehrig along with a few of the baseballs hit by Joe DiMaggio during his historic 56-game hitting streak. The museum even had the record-breaking home run bat used by Babe Ruth. Walking through the museum was like going back in time and reliving some of the greatest moments in sports history.

Upper Deck held a silent auction which included some amazing pieces of memorabilia including a Babe Ruth autographed baseball, a Derek Jeter autographed bat and LeBron James autographed game-worn shoes to name a few. We gathered in a room where we were greeted by Mr. Cypres. As a serious collector, it was interesting to see that he had as many questions for us as we had for him.

After a few minutes, our special guest was introduced. Through a side door entered none other than Dallas Cowboys quarterback Tony Romo. I felt a rush when he walked up to the podium and addressed the group. He was a very down-to-earth gentleman and carried himself very well. I am not a Cowboys fan, but I can now say that I am a Tony Romo fan. I enjoyed talking with him for a few minutes about the state of my beloved Denver Broncos. Then we took a picture which he later signed under the watchful eyes of Upper Deck Authenticated reps who witnessed the signing. Tony was a class act and this was a night I will never forget. 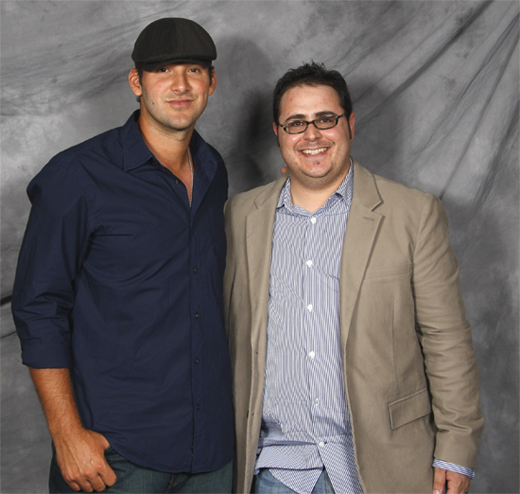 Sunday morning came and I couldn’t believe that the trip was almost over. Upper Deck treated us to brunch at the hotel in a room overlooking the Pacific Ocean. The staff handed out packs of 2009 SP Legendary Cuts Baseball for us to open. Depending on the card number that was pulled, we were invited to choose a special gift from Upper Deck. These gifts included items such as footballs signed by the entire 2009 NFL rookie class, autographed baseballs of legends like Ted Williams, original card artwork and a great assortment of autographed cards signed by premier athletes.

Upper Deck’s Sports Marketing Manager Chris Carlin addressed the crowd and introduced us to our special guest, Hall-of-Famer Rod Carew, who was joining us to sign autographs and take pictures. Mr. Carew spoke briefly and then opened up the floor to questions. I found Mr. Carew to be a class act and it was an honor to meet him. He signed a baseball for me that was authenticated by Upper Deck on the spot. Mr. Carew stuck around for a while and mingled with the DC members. It was a great way to end the Summit getting to spend some time with a former MVP and 18-time MLB All-Star. 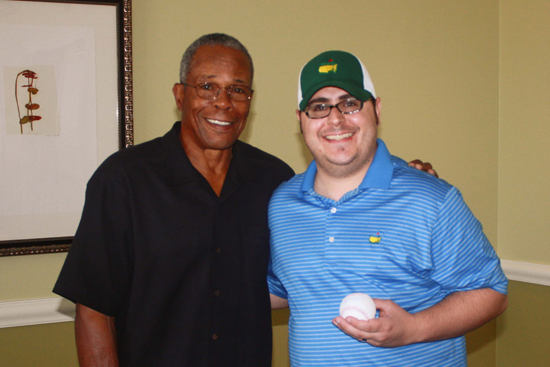 What a special weekend this was for all of us. How often does a collector get to meet some of the sports world’s greatest players and also get to see what goes on behind closed doors at Upper Deck and PSA? I am very grateful to Upper Deck and I hope that I am lucky enough to attend next year. I open a lot of Upper Deck packs. I have a lot invested in their cards and memorabilia. It’s great to know the company I support is willing to take the time to say thanks by providing me with such a special event. 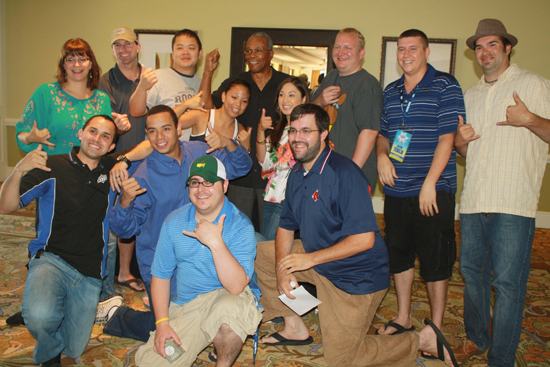 Gabe D’Arthenay has been collecting since 1989.  He collects primarily football and baseball with a focus on the Denver Broncos and former Oklahoma Sooners football players.