Collector of the Month: Jeff Silverman

Each month Upper Deck will spotlight one of our valued collectors to showcase their collection. The great thing about sports collectors is that they are all very different in what they collect, how they collect items and what they do once they have them.  However, one thing they all share is a passion that is seldom found in any other group. This month, we spend some time with Jeff Silverman. 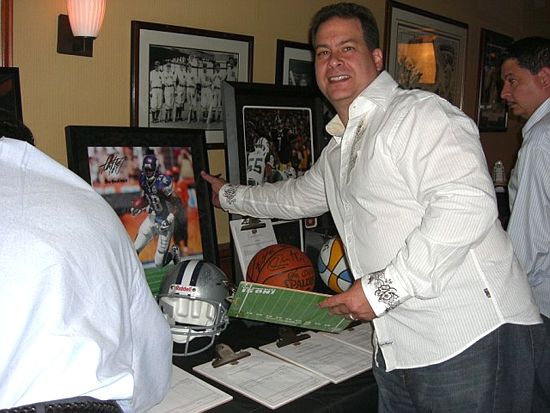 Jeff Silverman has been a passionate collector of Upper Deck trading cards and memorabilia for the last twenty years. In the early 90’s he decided to give his collection some focus and targeted Eric Lindros. This was before tracking down cards of a specific player was made easier with eBay, so Silverman traveled to shows frequently in order to find the latest cards he needed for his collection. 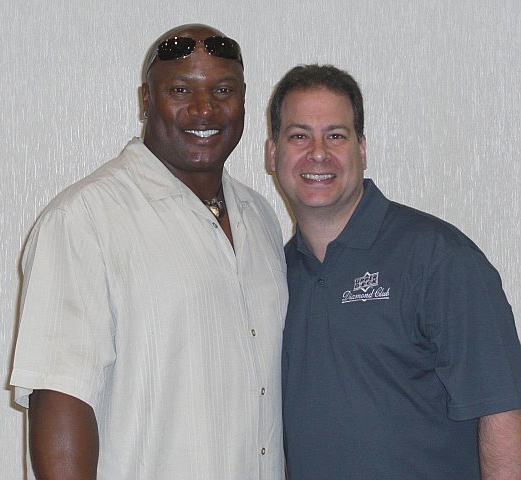 After Lindros repeatedly broke down, Silverman decided to balance his portfolio by collecting stars of all four core sports and golf. His passion has been trading cards and over the years he has amassed thousands of cards that he keeps locked up or stored away. 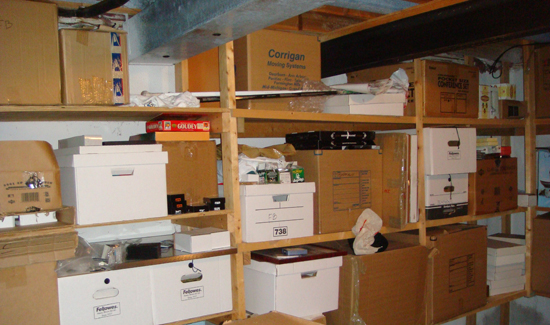 “I’ve assembled some pretty impressive cardboard in my time,” said Jeff Silverman. “While looking through my numerous boxes of cards, it dawned on me that showcasing my cards would only provide a glimpse of my passion. Some of the pieces I enjoy the most that are really amazing are the memorabilia items I have acquired over the years.”

Silverman began collecting Upper Deck Authenticated memorabilia shortly after the FBI concluded the Operation Bullpen program with the cooperation of Upper Deck. After hearing about how much fraudulent memorabilia there was in the market, he wanted to go with a name he could trust when investing in collectibles of his favorite sports legends.

“When Upper Deck provided the safe mechanism to acquire autographed memorabilia, I expanded my collecting habits beyond trading cards,” said Silverman. “The piece of mind you get from investing in Upper Deck Authenticated memorabilia is worth its weight in gold as you know you are getting the real deal.” 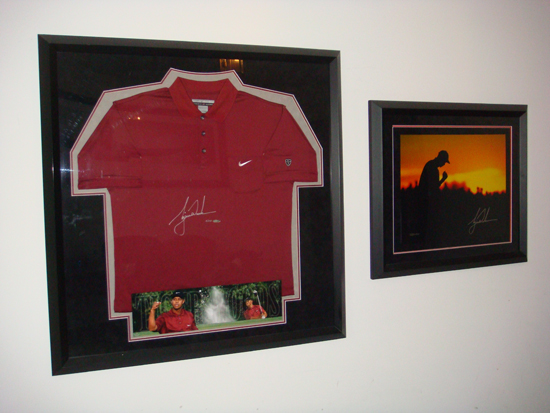 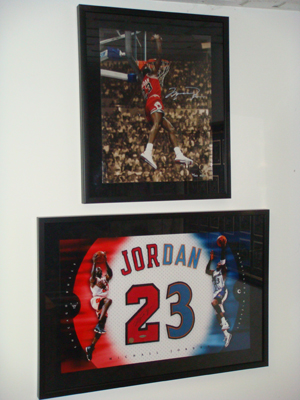 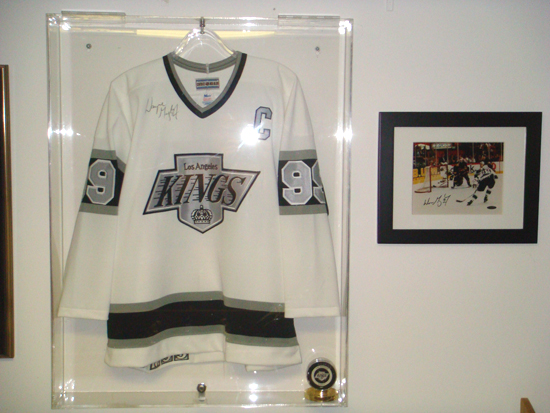 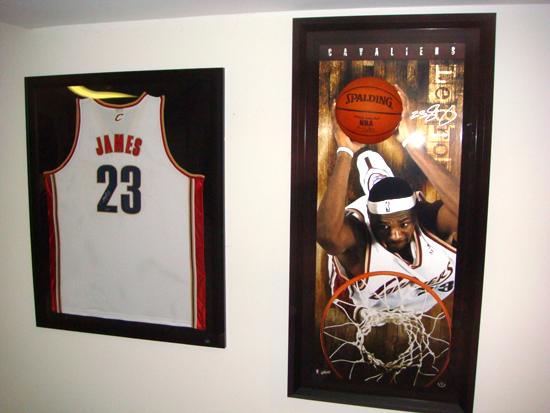 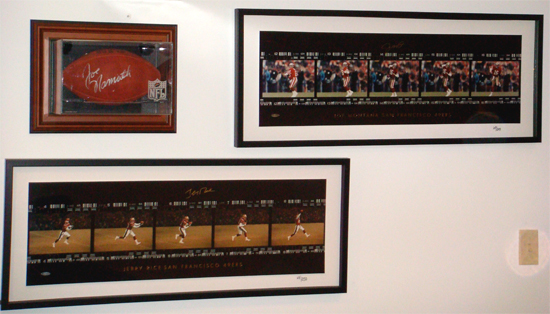 . . . not to mention some premium NFL items.

Having a collection this size creates some interesting challenges as Silverman cannot display all the items. In fact, he estimates that at any given time he can only display about 1% of his collection. He refreshes what he displays however and loves to show off new items he recently acquires.

Silverman has two prized pieces in his collection on the memorabilia side. His current favorite is the Upper Deck Authenticated “Legends of Sport” piece which is a lithograph signed by Muhammad Ali, Michael Jordan and Tiger Woods. The other piece is a play on the famous Michael Jordan “Wings” poster by Nike. Upper Deck Authenticated created a version that Jordan signed, but also included an element where and actual basketball was incorporated into the piece that broke through the glass. The Michael Jordan “Wings Breaking Through” piece looms over Silverman’s workstation at home. 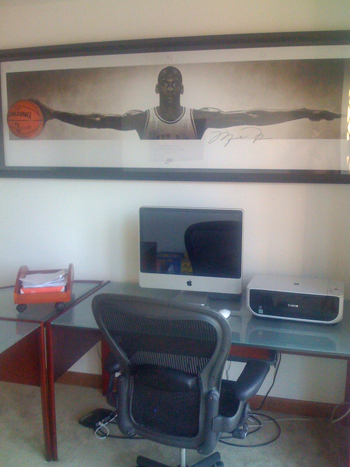 Silverman has also dabbled in other collectibles offered by Upper Deck including busts and All-Star Vinyl figurines. He has dedicated full walls of his home dedicated to these unique collectibles. The crown jewel of his collection is the very rare Ben Roethlisberger All-Star Vinyl “Kris Kringle” version. 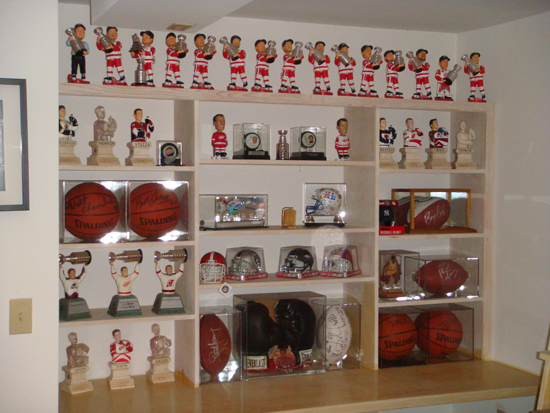 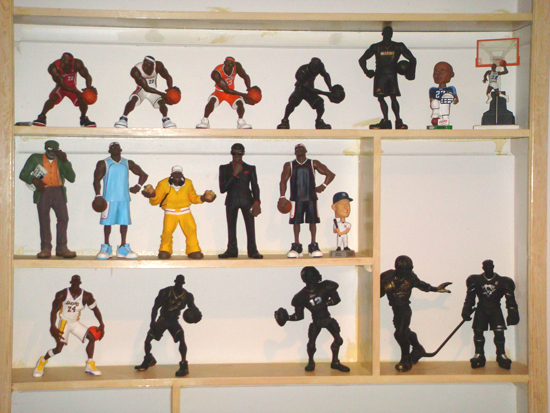 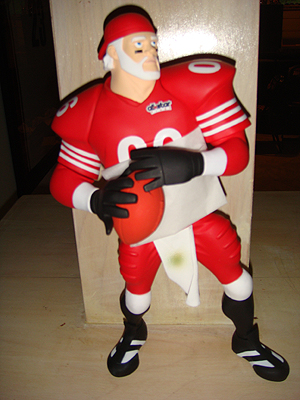 Silverman find it easier to find items of his favorite players online nowadays, but still loves getting out to larger shows like the National and NHL Expo. One of his greatest thrills is sharing his collection with others.  He especially loves sharing it with his son who will likely inherit the collection someday, but he has to grow into it first.

A collector in training, Jeff shares his passion with his son.

congrats on the honor Jeff

Awesome items Jeff! Its the next best thing to seeing it first hand.

Your turn my friend. I got tired of seeing my face lol Congrads Jeff