Vs. System 2PCG: Marvel Studios’ The Falcon and the Winter Soldier – A New Legacy

It’s time for the true successor of Captain America to stand proud and fly high! We met the Winter Soldier and overcame multiple Super Soldiers, but for this last Vs. System 2PCG: Marvel Studios’ The Falcon and the Winter Soldier preview, it felt best to spotlight Sam Wilson. 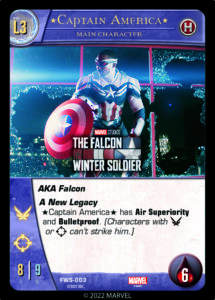 He’s lived up to Steve’s legacy, but Sam’s also the beginning of A New Legacy in the MCU – and he helped save the family boat!

There’s truly no one more worthy to carry Captain America’s Shield, and live on as The Greatest Symbol for this new era. 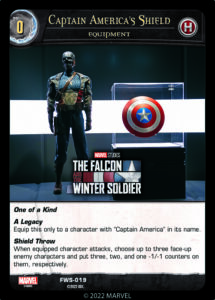 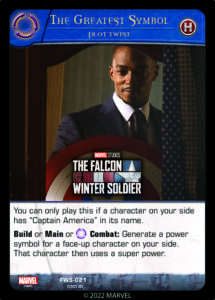 That’s it for this batch of spoilers, but the clock is ticking on our next release already. Let’s not get ahead of ourselves though, Vs. System 2PCG: Marvel Studios’ The Falcon and the Winter Soldier will be available starting November 23rd!