No Longer Just for the Guys: Female Collectors Play a Meaningful Role in the Hobby Today

Female collectors have always been a part of the trading card and collectibles hobby. Women are definitely in the minority however making up about 7% of Upper Deck’s fan base. One female collector shared with us, “Sometimes I feel like I’m one of the only female collectors out there,” shared Raji K. “Other collectors I trade with assume I’m a guy and say, ‘Okay brother,’ or, ‘hit me up soon man.’ Sometimes I’ll explain to them I’m a girl and they feel so bad. It doesn’t really bother me though; usually I get a good laugh out of it.” 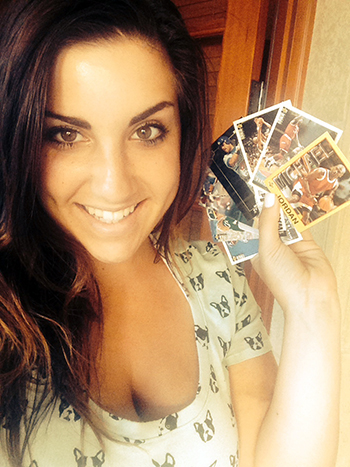 Not too long ago a Facebook group was started by female collectors and dealers in the hobby that has been very active. If you are a female collector, I suggest you check it out: Women in Cards

Perhaps by sharing the stories of other female collectors, we can shine a light on how welcoming the trading card community is for people of every race and gender. Just like Hockey is for Everyone, so are trading cards, no matter who you are.

Recently our social media team has enjoyed engaging with a female collector named Lori Bertman. She is a great advocate for collecting and when it comes to her Pittsburgh Penguins, she has amassed a pretty serious collection. Here is her story:

“I grew up in a dugout. As the youngest of four daughters of the winningest college baseball coach in history, I spent most of my formative years after school at the ball field. First with the Miami Hurricanes and then with the LSU Tigers. I am no stranger to sports, memorabilia or championships, but my understanding of fandom and collecting memorabilia started from a different place.

“My father was wonderful with fans and I also saw how much it meant to them to receive a signed autograph or ball from him or his players. I only collected memorabilia to donate to charity or for the random fan who would leave a dozen balls on my doorstep with a note asking if I could help get them signed by the entire team. I honestly thought that was a little much at the time and I wondered how people could be such fanatics for a team or sport their dad wasn’t the coach for. In our household the outcome of winning or losing was personal. Luckily, we didn’t have to deal with losing much as I got to witness all the spoils of six National Championships.

“What I learned most from watching my father coach baseball those years was not that I wanted to be an athlete, but that whatever I chose to do, I should choose to make a living doing something I love and to do it well.

“I loved to help others so I began a career in philanthropy and social entrepreneurship building programs for the betterment of society. I am currently a CEO for a large family foundation and the co-founder of the only disaster philanthropy organization in the world.

“So what does this have to with hockey, the Penguins and collecting?

“While in Miami, I was compelled by the story of the Pittsburgh Pirates, Roberto Clemente, and his life & death as a humanitarian. I quote him often in speeches. And I also must note I was a little girl who grew up in the hay day of the Steelers: Bradshaw, Swan, Mean Joe Greene and so many more. I only saw Pittsburgh as a cool professional sports town. And then came the hockey! 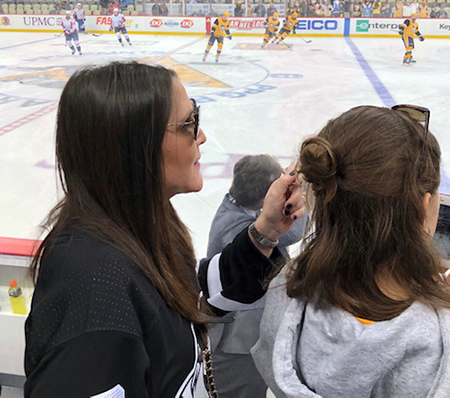 “In December of 2014, I was in a serious and life-changing car accident leaving me severely injured and laid up for much of 2015. During that time a friend of mine, Rick Ozzie Nelson, a Pens fan and Pittsburgh native would check in with me while watching the Penguins. I said, okay I will check this hockey thing out. And wow, by the time the Stanley Cup Playoffs came around in 2016, I was already in love with Sid the Kid and Mario Lemieux. The playoffs were so exciting and just like the Pirates and the Steelers, the Pens became my pro hockey team. I had never been to a hockey game before so with my go big or go home attitude, I procured tickets to Game Four of the Stanley Cup Final. I wore a sundress not understanding anything about the culture of hockey garb and less about the mechanics of the game. I quickly went down to the gift shop and bought a Crosby jersey, put it over my dress and from there I was hooked. They lost that game, but they won the Cup at the next one in San Jose. I became enthralled with their athleticism and, of course, the Stanley Cup. 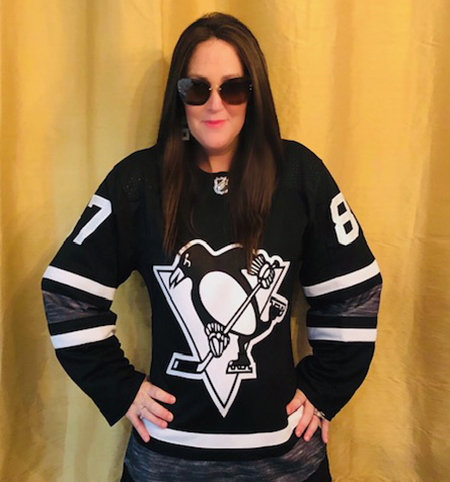 “Instead of just checking the experience off my bucket list, I dove into the deep end head first. I wanted to know everything. I joined fan groups and begin to collect items from the championships and purchase others at charitable auctions. I immediately gravitated to getting involved with all the charitable components of hockey including the “Hockey Is For Everyone” campaign (HIFE) because my life’s work is about building a fair and just society for all, so why not within sports. I was already involved with an organization called, “Athletes for Hope” in which Mario Lemieux was an original board member, but then became involved with, “You Can Play” as an ally and ambassador as I saw them as a strong force behind HIFE. So I started to collect Pride sticks, Cancer jerseys and anything with social impact. I would re-sell on the collection sites, but would give all the money back to charity. I quickly became a popular character in the world of collecting as someone who was very trustworthy, but totally a fish out of water. 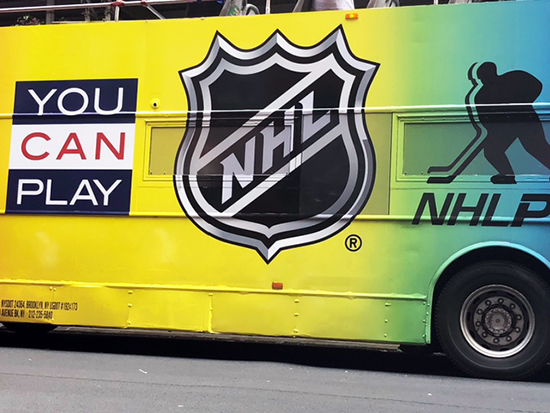 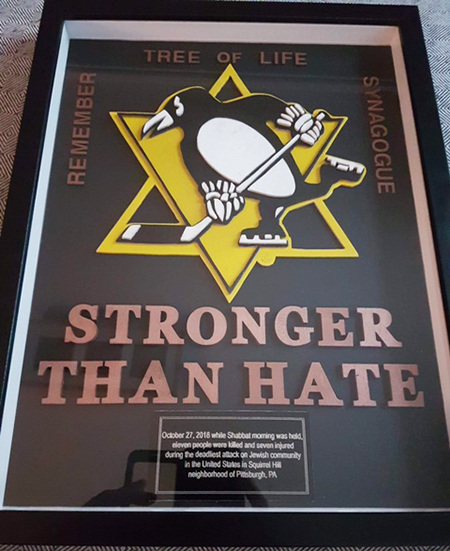 “Finally I was just a fan like all those people at LSU. I finally understood that crazy feeling and if I had Sidney Crosby’s address, maybe I’d drop off some pucks for him to sign. Since I couldn’t go to many games, collecting became my hobby and collecting cards became my favorite part of it. I didn’t know enough about hockey outside the Penguins so I figured I would do two things: (1) Collect cards and (2) get to the Hockey Hall-of-Fame to learn the history of the sport. 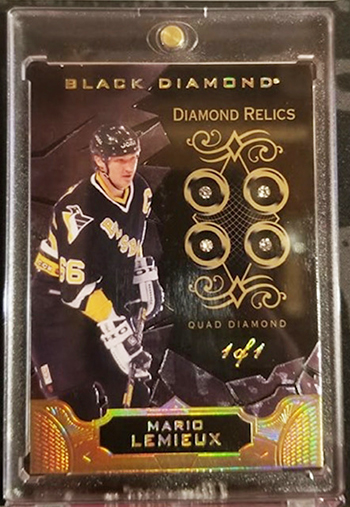 “I started collecting Tim Hortons and then not unlike my art or shoe collection, I immediately loved the design of the high-end cards. They are beautiful pieces of art, moments in time, and honestly have taught me more about the game and players of hockey than any other experience. I can’t buy hockey cards in Louisiana so I have to order or buy through breakers and shops online. I love the card community and truly have enjoyed it as a subculture of my many other hockey collectibles. Just like my hockey collection, my card collection aims at the Pens, (Sid and Mario) and influencers or trailblazers in the sport, Hall-of-Famers, Manon Rhéaume, Willie O’Ree, Scotty Bowman (I immediately needed to know who was the winningest hockey coach, right?). I would love to see cards that depict #hockeyisforeveryone from pride, to Indigenous People, players of color, women, blind and persons with other physical or mental challenges. 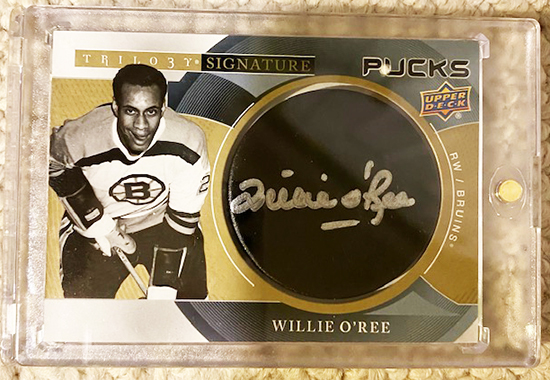 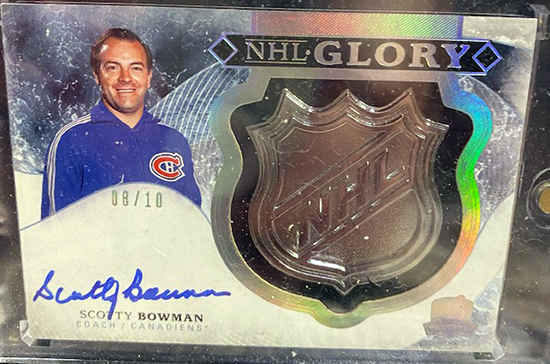 “After visiting the Hockey Hall-of-Fame Archives, I became friends with Phil Pritchard and joined a committee of their board to help with philanthropy for the Hall especially in the wake of COVID. I am the first female fan associated in this capacity with the HHOF and definitely bring a unique perspective. I am honored to be associated with all of these wonderful people I have come to admire. However, I am still a goofy fan so I could get more excited about pulling a Sidney Crosby rookie tribute out of Clear Cut than actually meeting him. 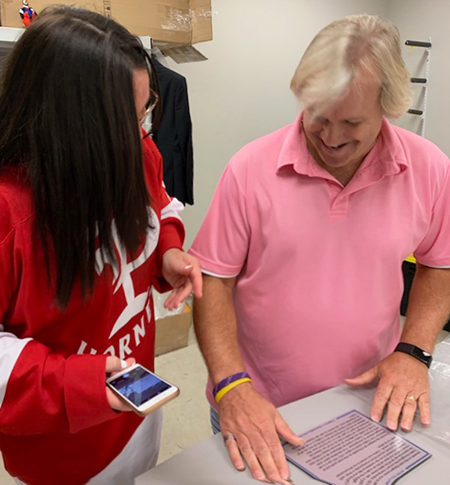 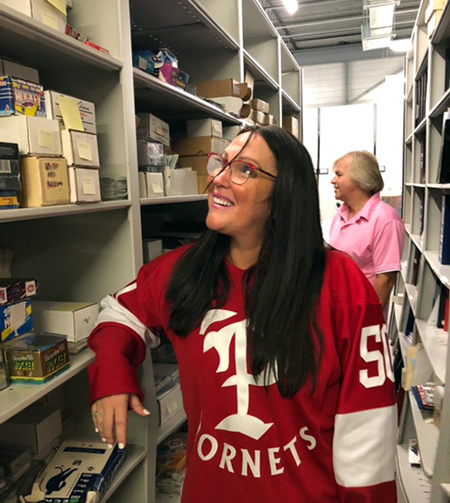 “When my son left for college, I began turning his room into my Hockey Zoom room, a stylish she-shed if you will. The number one question I get from most people is a line from the hilarious show VEEP, ‘What’s with all the hockey stuff?’” 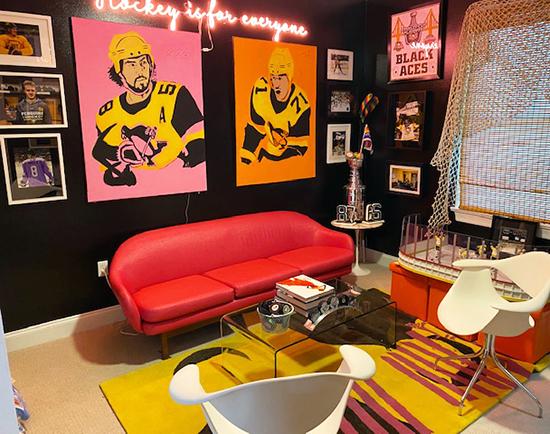 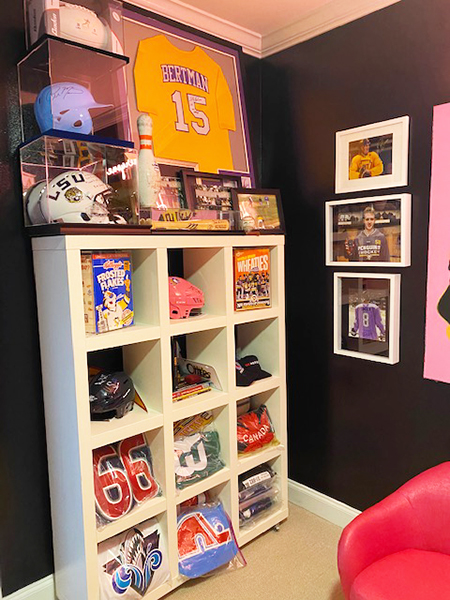 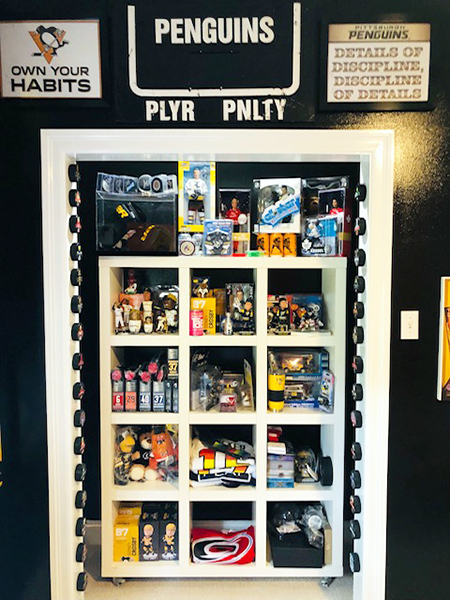 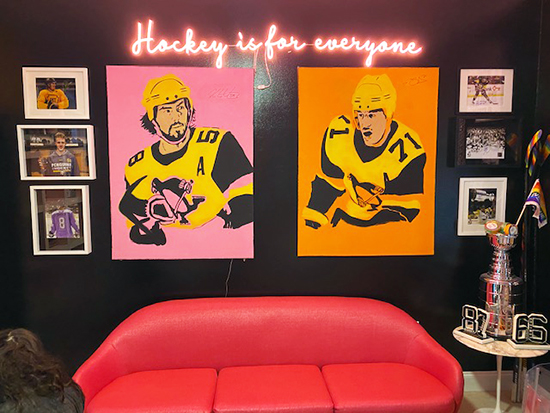 “I hope I am known in the hobby as generous, trustworthy and in it for the right reasons. I enjoy helping people complete card sets or giving cards to other collector’s kids who are just getting started. I appreciate people sending me cards from around the world because they know I want any card or collectible that promotes inclusion or hockey history. I must thank Phil Lucas for pulling my very first Crosby auto from SPA, and the Scotty Bowman shield from 17/18 Cup. Also, thanks to Thomas Reid for pulling me a 1/1 quad diamond Mario Lemieux. These are three cards I will always treasure. Overall I am a big fan of the Cup, Chronology, Engrained and Buybacks. I don’t collect rookies but one day would like to have Sidney Crosby’s true rookie card. 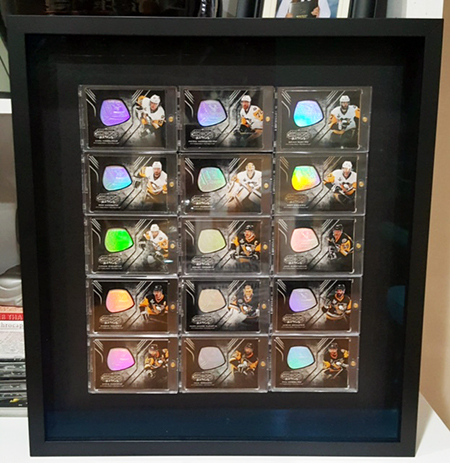 “I have built wonderful friendships through collecting, all my Pens family of course, but also card collectors worldwide. We have a bond. Most notable is my favorite Penguin fan card collaborators Matthew A., Denis C., Joe C., Vicki W. (a female LA Kings collector in London who I gave all my Jeff Carter cards to before he got traded to the Pens), and Canucks card collectors who are so sharp and funny. Finally to my friends Phil Pritchard, the Keeper of the Cup and Jim Britt, President of the Pittsburgh Penguins Foundation for their hockey mentorship and all who share their stories about growing up watching hockey which is what really brings all my cards and collection to life. Mostly I’d like to say, ‘thank you’ to my father, Skip Bertman, who modeled for me that being a good player outside of the game will always be more important than anything you do during a game.”

Thanks so much for sharing Lori, we appreciate your passion. If you want to connect with Lori, give her a follow on Twitter at @LoriBertman. We definitely love the look of her Hockey Zoom Room! Keep that passion going and good luck to your Penguins this season!

If you’d like to hear some other stories of female collectors, check these out:

The Hockey Mom Review – Opening Packs as a Family

A Female Collector in a Male Dominated Hobby


Thank you for the shout-out for my Facebook group. It’s been so great to see it grow over the last two years. If anyone reading this is a female collector, please join. We are a very supportive group.