Welcome to the start of previews for the Secret Avengers Issue for the Civil War Arc for Vs. System 2PCG!

This Arc features various heroes and villainous heroes featured in the Marvel Comics Civil War story. After innocent civilians have been caught in a superhuman crossfire, the government attempts to identify and register all super-powered residents. But not everyone agrees with this plan. Iron Man and Captain America find themselves on opposite sides of the dispute as we come to the ultimate battle over right and wrong – MARVEL’s Civil War!

) team led by Steve Rogers’ Captain America. Both teams are well represented in the 200-card The Civil War Battles Issue, and the Secret Avengers Issue sheds some more light on Captain America’s team of rebels.

As we discussed in The Civil War Battles preview articles, super powers are sort of the crux of the issue between the teams. And we showed you several cards that had or dealt with super powers. We’re going to continue that pattern today: 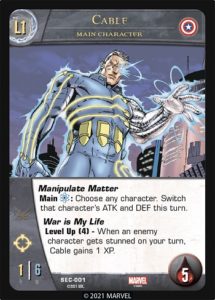 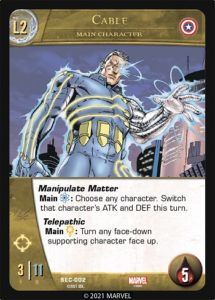 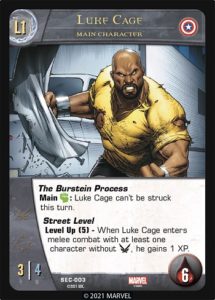 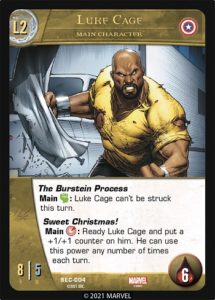 Up next is someone Luke is very familiar with: 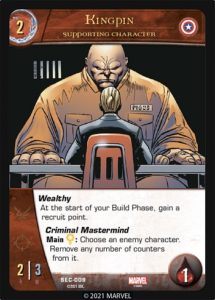 Yep, that’s the Kingpin himself, teaming up with Captain America! You will notice in both this Issue (Secret Avengers) and the next one, (Thunderbolts, which adds more cards to Iron Man’s side) the line between villain and hero is becoming even more blurred.

Also note that Kingpin’s Criminal Mastermind says “any number of counters”. This includes any type of counters: +1/+1, -1/-1, Wound, Vitality, Package, Update. Any! And although some players put XP counters on their Level 1 main characters as they gain them, these counters are supposed to be on the next level main character in their Level-Up Zone. So, he can’t get those!

We need a palate cleanser after working with that guy. Here’s someone better! 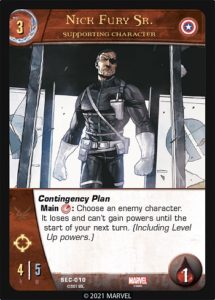 Note that this is not the same character as previous Nick Fury’s in the game (hence the “Sr.”).

So these were a lot of characters with super powers, but what else can Cap’s side get up to? 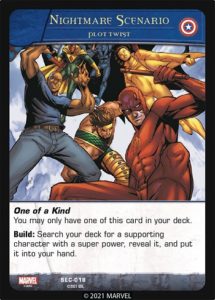 That’s a nightmare for Iron Man, for sure!

And so is this: 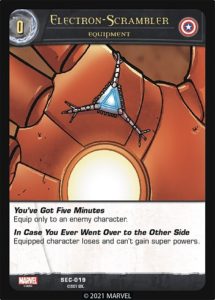 As you can see, the art is the Scrambler on Iron Man’s hand, a neat little trick Cap pulls on Tony when they are about to shake hands. But it works on non-armored folks as well.

Thanks for joining us today, and we hope you liked the cards. Join us next time as we finish up our look at the Secret Avengers!