Welcome back everyone, and thanks for joining us for another installment of the previews for the Civil War Arc for Vs. System 2PCG!

One more reminder about our philosophy for this product: making The Civil War Battles “The Best Place in the Multiverse to Learn How to Play Vs. System 2PCG!” The entire product, from the iconic MARVEL characters and story, to the revamped rulebook, to the design and development of the cards, has all been created with this goal in mind! The cards are simple, but don’t worry, they’re still powerful, flavorful, and fun! So, if you’ve been curious about the game, this is the place to start!

Last time we looked at some of Cap and Iron Man’s allies and their respective Plot Twists. Today we’re going to look at how each side deals with +1/+1 and -1/-1 counters.

First, the master spy herself… 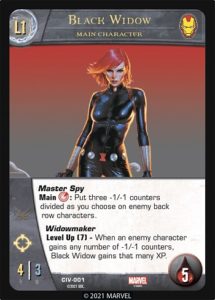 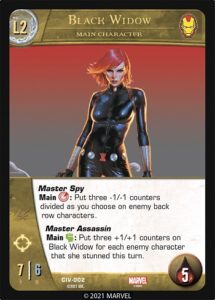 She uses both kinds of counters! That’s not surprising because she so often plays both sides…

But here’s someone she can’t spy on! 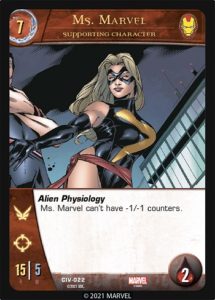 Aliens are real and already here! That’s crazy! But not as crazy as this next card: it costs 8 and is 1 ATK/1 DEF! 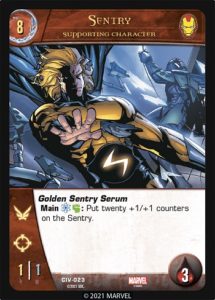 Well, how does Cap expect to counter these behemoths? 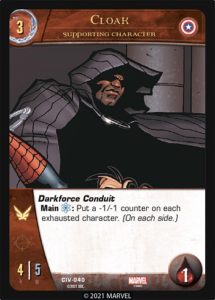 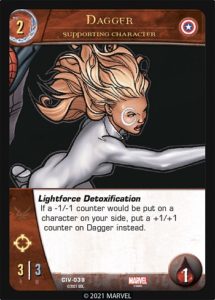 OK, that’s a start, but doesn’t Cap need something bigger, something… 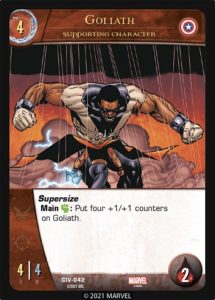 Now we’re getting there! But as big as Goliath is, Sentry can easily be 21/21! We need more power! 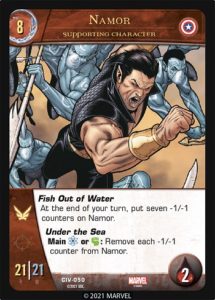 Whew, that ought to do it!

We hope you enjoyed this look at some of the cards in the Civil War Battles that use +1/+1 and -1/-1 counters. Join us next time as we dive headfirst into what the Civil War is all about: super powers!