Welcome to our third preview for the Masters of Evil Issue. Last time we looked at Ultron. But today we’re going to look at a mysterious figure who is totally not Ultron wearing a mysterious cowl. 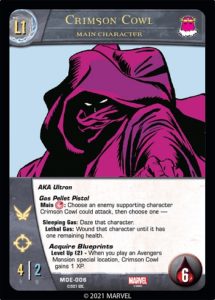 Meet the Crimson Cowl! But who could this mysterious villain be? There’s only one way to find out. (Other than looking at his AKA text.) 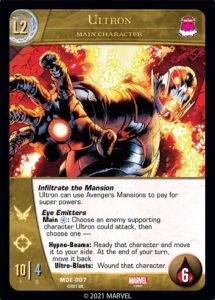 Turns out it was Ultron all along! Who could have guessed?!

Note: Hypno-Beam lets you steal an enemy player’s Supporting Character for a turn. It can be ready or exhausted. If it’s exhausted you’ll ready it. At the end of your turn, you’ll move it back to that player’s side, but you don’t have to put it back in the same row where it was before.

Speaking of villains who can shoot beams out of their hands, check out our next preview: 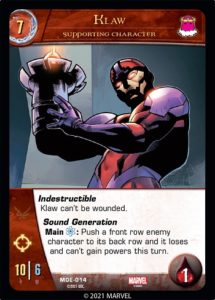 You read that right. Klaw can’t be wounded. (He can be stunned though, so have at it.) 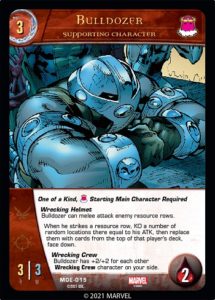 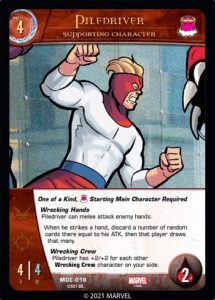 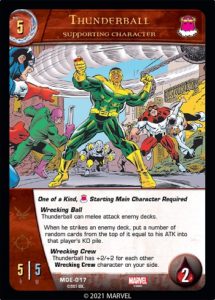 There’s a lot going on here so let’s start at the top. You can only include these one of a kind characters in your deck if your starting main character is

Now on to the good stuff. While each member of the Wrecking Crew can attack normally, they can each also attack a different part of the game.

These are all melee attacks so in order to make them, the Wrecking Crew member must be ready and in his front row, and he will exhaust to start the combat.

While a member of the Wrecking Crew is attacking a hand, deck, or resource row, he counts as being an attacker, but there is no defending character. (The opponent still counts as the “defending player” though.) Players can play Plot Twists, use Super Powers, or Power Up as normal. For example, the defending player could play a Plot Twist to reduce the attacker’s ATK or cancel the combat.

Finally, if you’re wondering about the leader of the Wrecking Crew, the Wrecker himself… pick up a copy of the Masters of Evil Issue to see him for yourself!

We hope you enjoyed today’s preview. Come back next time for a first look at our next Spell-tacular Issue!