Vs. System 2PCG: The Frightful Card Preview – He Arrives

Welcome to our final preview for the Fantastic Battles Arc for Vs. System 2PCG. It’s a fitting one, because someone is here to end the world. Let’s get right to the main man. 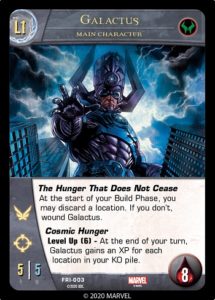 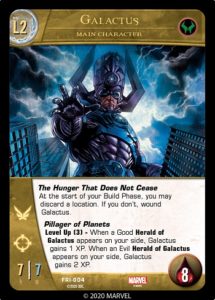 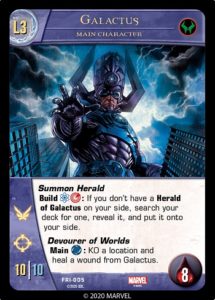 Note that for Pillager of Planets, you could play 3 Good Heralds or 2 Evil Heralds to level up – it doesn’t need to be one of each.

Here’s a little more detail about Devourer of Worlds. First, you will need some Space locations to pay for its

cost. Second, you can KO any location, not just yours.

Oh, and remember Silver Surfer’s You Must Be Driven From This World power? 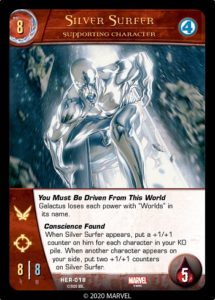 A decent counter to Galactus’s Devourer of Worlds…if he can stay face up.

That Hunger seems like a real issue for Galactus, though. Let’s look at another of the big man’s supporting cast, shall we? 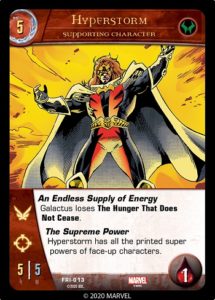 Hyperstorm’s own energy is something Galactus can feed off, instead of eating worlds. Nice for the worlds, not that good for Hyperstorm. But it’s not entirely a one-sided relationship – Hyperstorm could Summon a Herald or Devour a World himself.

Galactus has a sketchy history of his choices of Heralds, leading some to theorize that he wants them to stop him, deep down. 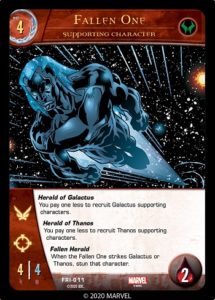 This Herald stays a little better on task – he’s almost too focused! 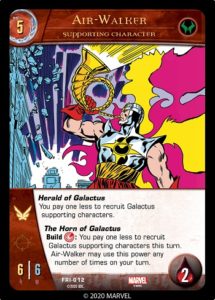 Now, finally, we come to the moment we’ve been heralding all this time: 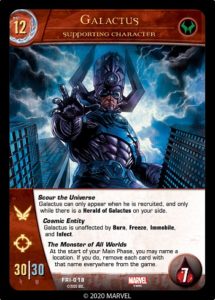 There he is, in all his splendor! Ahhhhhhhh, he’s trying to grab me! Run!

The Monster of All Worlds removes locations from everywhere (sort of like Uatu’s The Watcher a while back). To resolve it, each player reveals their hand, deck, resources (including face-down ones), KO pile, and any out-of-game piles. All locations with that name are removed from the game. Then each player shuffles their deck.

Remember, though, that Silver Surfer can counter this power too (see Surfer above)! He’s your only hope!

A quick heartfelt note: We had a heavy responsibility for this Arc: The First Family, Doctor Doom, Silver Surfer, and Galactus. Pretty epic roster that we have been entrusted with, and we hope we lived up to your expectations!

Join us next time as we preview more cards for Vs. System 2PCG!

Vs. System 2PCG: The Frightful arrives on July 15th!


Thank you so much for the great work!

I hope some day we will have in South America organized game of VS 2pcg.
I will have a trainsing card store!