Welcome to our previews for the First Family Arc for Vs. System 2PCG. Today is the third preview article for the 200-card The Fantastic Battles Issue that kicks off the Arc! Let’s get to it! 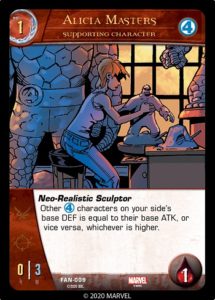 So, if you had Alicia out with Franklin from our last article, he would become a base 12/12 instead of a 4/12.

But what if it wasn’t really Alicia? 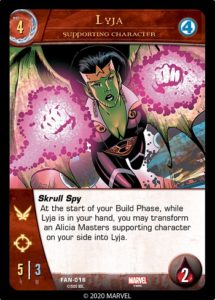 Note that when a supporting character transforms, you remove it from the game.

But enough of these small fry! Let’s get to the heavy hitter! 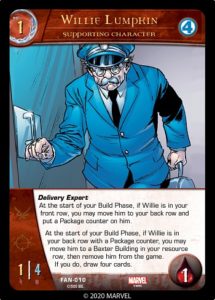 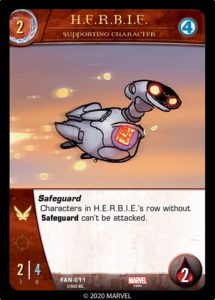 The best delivery man in the multiverse, and the best robot in this article! Note that Package counters don’t fall off characters when the characters are turned face down — Willie has a grip of steel! This might be more meaningful in a couple of weeks.

Next up is the most dangerous nanny we’ve ever seen. 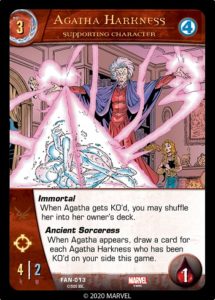 Note that if you play a second Agatha while one is on your side, Ancient Sorceress will count the former Agatha (who would be KO’d due to uniqueness).

Let’s do something weirder! Oh here’s one! 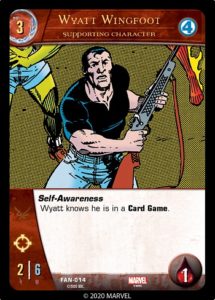 In Wyatt’s adventures he became aware that he is a fictional character (and sometimes in a Card Game).  This can be…complicated. Last long rules section, I promise! (Well, this time, at least.)

Here’s how it works:

Characters and Equipment you play from Wyatt’s part of the hand work as normal once they are on your side. (Once they’re in play, it doesn’t matter if they came from your main hand or Wyatt’s part of your hand.)

You can play Plot Twists or power-ups from Wyatt’s part of your hand as normal.

You can spend Locations in Wyatt’s part of your resource row or discard them from Wyatt’s hand to generate power symbols normally.

Note: If Wyatt gets moved to another player’s side, remove all the cards in his part of your hand and resource row from the game. Now Wyatt will draw extra cards and play extra resources for that player.

See, no problem! What’s really going to bake your noodle is if you put Wyatt in a Pocket Universe. We recommend it heartily! 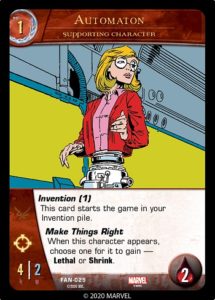 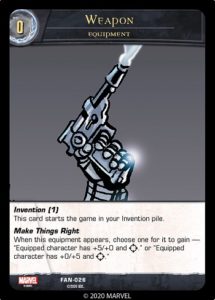 And here’s another one that Mister Fantastic can make! 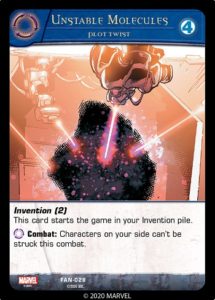 Let’s end today’s preview with something a little more…universal? 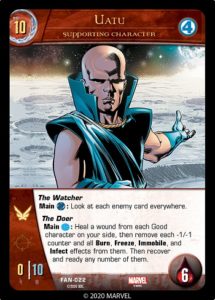 We hope you liked the cards today. We liked designing them for you all!

Join us next time as things get all doom and gloom. See you soon.

Vs. System 2PCG: The Fantastic Battles arrives this May!