Vs. System 2PCG: Futures Past Card Preview – A Dark Future For Mutantkind

In a dark possible future, mutants are hunted at every turn by giant robots… 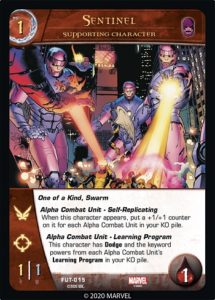 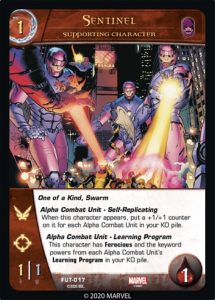 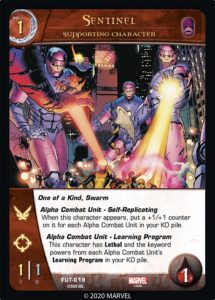 One of the most dangerous things about Sentinels is that they learn from previous failures. Each Alpha Combat Unit Sentinel you recruit gets stronger and gains powers for each one in your KO pile. (There are eight different Alpha Combat Units – we’ll leave it to you to guess what the other five keywords are.)

But perhaps a team of Sentinels isn’t enough. Perhaps, you want to be a Sentinel yourself. 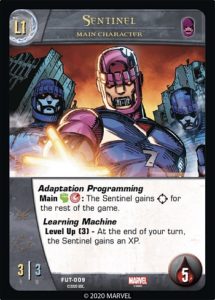 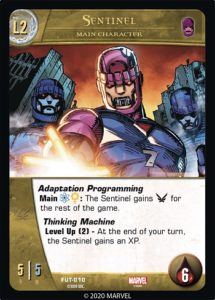 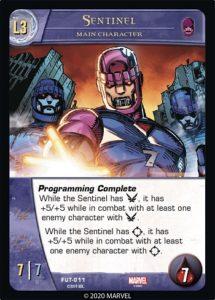 The Sentinel main character also gets stronger and gains new powers during the game. And once it has gained

it is suddenly harder to beat by characters with those powers.

Note: If the Sentinel has

it will get +10/+10 while in combat against an enemy character that has both of those powers.

Part of why this future is so dangerous is the Mutant Control Act. 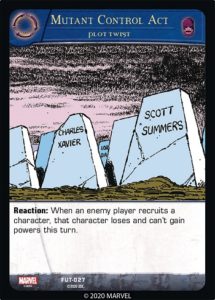 Note: Since this plot twist is a reaction, it will happen before any of the recruited character’s “recruit” or “appears” powers can take effect.

Finally, not all Sentinels are of the giant robot variety. 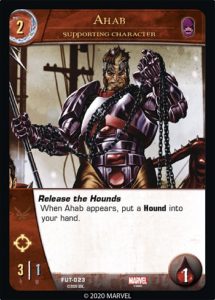 In the comics, Ahab brainwashed captured mutants, turning them into his “Hounds.”

In the game, if Ahab is in your deck, you start the game with a private out-of-game Hound pile. This pile must contain exactly four different supporting characters of your choice with

Your Hounds lose their printed team affiliations and gain the

affiliation. This effect lasts the whole game regardless of where the Hounds are, including your hand, deck, KO pile, and even if they get temporarily removed from the game somehow.

When Ahab appears, choose a Hound, reveal it to all other players, and then put it into your hand.

We hope you enjoyed today’s peek at some of the horrors facing the mutants of the future. Join us next time to see how the mutants fight back (in time).