Welcome to our previews for the First Family Arc for Vs. System 2PCG. Today is the fifth preview article for the 200-card The Fantastic Battles Issue that kicks off the Arc! Let’s go!

The Fantastic Four have had a long list of epic villains, and Super-Skrull is near the top of the list! 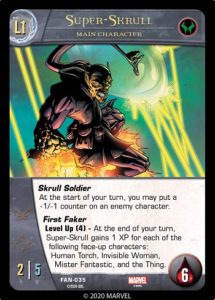 Note that he does gain XP for supporting and main characters, and on both sides. But if there are more than one of a specific character on all sides (for example, you and an enemy player each have a Human Torch on your sides), he will only gain 1 XP for Human Torch.

But we haven’t seen most of these main characters, you say! And we never will, you say! 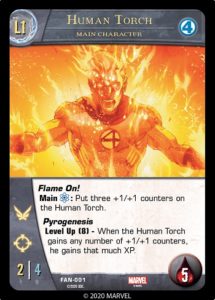 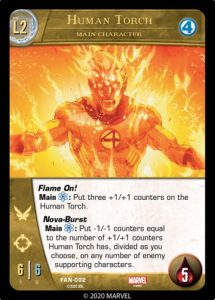 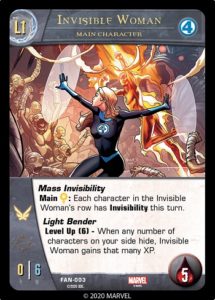 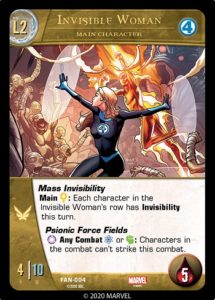 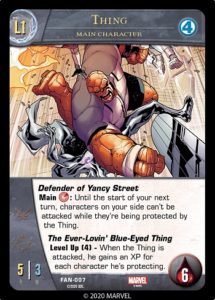 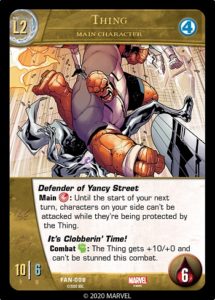 Huzzah! Note that Invisibility means “At the end of your turn, if this character is ready, you may hide them.” (And hide means turn them face down but ready.)

And Super-Skrull likes these suckers even more on his next level! 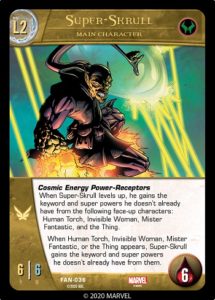 Whoa! Note that again, this power copies powers from these characters on all sides, not just your own. And that there is no expiration on these powers, so even once those characters are face-down or leave play, Super-Skrull keeps his copies of the powers. He just needs to see them once!

His supporting character version is similar, but different! 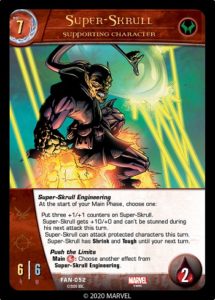 Note that for Push the Limits, “another” means a different effect from the one you chose with Super-Skrull Engineering (you can’t double up on the effects). 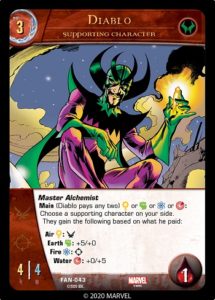 A helluva guy! Diablo’s Master Alchemist is a new template – he must pay exactly two power symbols to pay for it and they must be different. He’s an alchemist you see! If you mix Earth and Earth, you just get Earth, so that’s no good! Note that there is no expiration on the potion’s effects, either, even if the supporting character turns face down or leaves play.

Here are our unofficially official names for the potions Diablo makes:

Feel free to come up with your own names – we had discussed Dust Bunny, Kaboom, Spittle, Firepit, Puddle, and Teapot, respectively, as alternatives.

Well, it seems impossible to segue from that to another card. 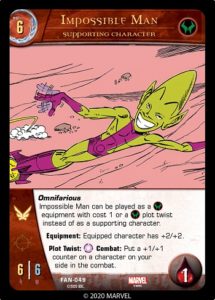 It wasn’t impossible after all! He’s three cards in one, but one in a million!

Speaking of Men, here comes another one! 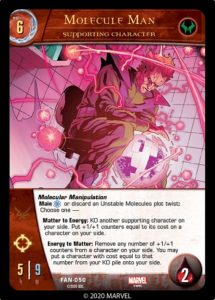 And here’s another character that looks like a man, but definitely isn’t. 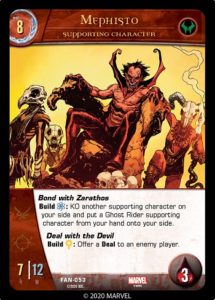 Mephisto famously created Ghost Rider and has been involved in all kinds of hijinks in the Marvel Universe, even the Infinity Gauntlet saga. But really, he’s the devil. From the rules:

At your own risk, you may offer a Deal with the Devil. Here’s how it works:

Here are a few exemplar Deals:

Got any good ideas for deals? Ben offered tons of fair deals to Danny while playtesting, but Danny was very hard to tempt. (Hint: He really likes drawing cards.)

Our last card today is a flexible one. 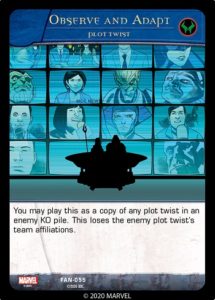 Please note that this plot twist is a

plot twist, so when you play it you must have a face-up

character on your side, as normal, even if the plot twist you’re copying has no team affiliation.

Thanks for sticking with us and join us next time as we herald the coming of…something.

Vs. System 2PCG: The Fantastic Battles arrives on May 13th!