Upper Deck’s Tim Horton’s NHL® trading card product has been growing in popularity every year. Tim Horton’s has done an incredible job embracing the card collecting as we saw in Regina, Saskatchewan for the Heritage Classic where they brought in several hundred collectors for a trade event. It has become an annual collecting experience like no other and puck fans throughout Canada love putting together the set every year. 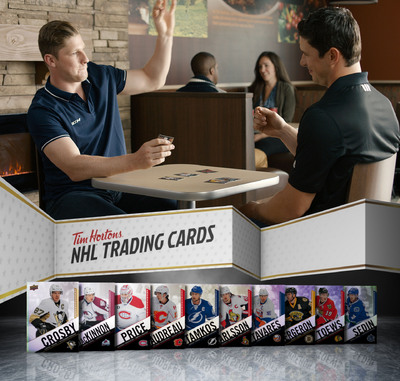 If you want to put together the entire set including the inserts, it can be pretty tough however. As we recently saw at the Western Canada Sports Collectors Convention, fans of all ages will go to great lengths to complete their sets! 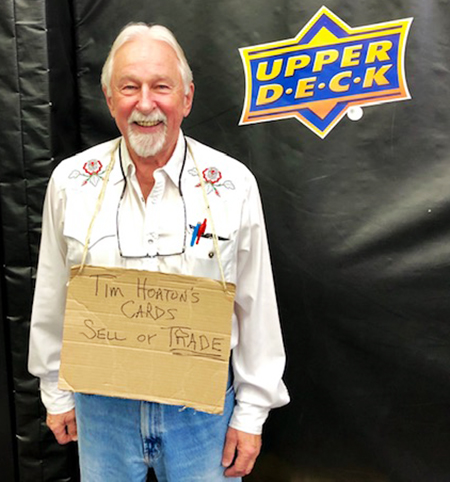 Young Owen S. and his two brothers from Terrace, B.C. were working diligently on collecting the set with their dad when they came to the realization they likely would not be able to collect all of the cards. Instead of getting frustrated over the difficulty in completing the entire set, Owen and his father came up with a unique idea. Owen would draw and color the cards he needed so he could put them in his binder and finish off his set.

“I talked to him about it, but I didn’t know he was going to do it,” said Josh S., Owen’s dad. “I came home from work one day and he had completed three of them. He had already gone to bed and he put them on my nightstand. He even drew one of the instant win cards from the Tim Horton’s set. I was so proud of them I posted them to a Tim Horton’s Facebook Trade group and that’s where things got interesting. People wanted them.”

“I told my dad maybe I could draw more and we could trade them with people for the cards I need,” said Owen. “I was surprised people wanted to actually pay for my cards. I was really excited so I got to work making more.”

For this eight-year-old, it was his first official job. Owen has always enjoyed drawing and loves watching “How To Draw” videos on YouTube. He is basically self-taught.

“He didn’t get it from mom or dad,” Josh said with a laugh. “He’s really gifted and we are very proud of our young artist.”

Upper Deck makes is a point to watch what fans are saying about the company’s products online and engaging with them on social media platforms. When we saw Owen’s artwork, we wanted to reach out. Our Customer Care Supervisor, Jeff Dotseth contacted Owen’s dad and worked out a trade with Owen. He sent him some of the Franchise Duos cards he needed in exchange for the hand-drawn cards Owen created. 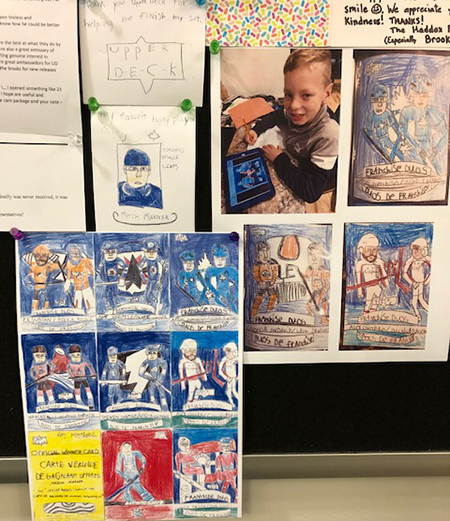 “We love engaging with families in ways that create great memories around our products,” said Dotseth. “We now have his artwork hanging in our office on our Wall-of-Praise. Employees and guests can’t help but stop to check it out as they make their way through our headquarters.”

“Our Customer Care team created a fun memory for the family, but on the marketing side we had an idea to do something really special for the family,” said Jodi Wasserman, Upper Deck’s Director of Marketing. “We wanted to have Owen set up at our corporate booth at the Western Canada Sports Collectors Convention in Langley and create some of his custom cards for fans in attendance.”

It wasn’t that easy though. Owen and his family live in Terrace, B.C. which is about a 12-13 hour drive to Langley where the show takes place.

“One of the things Upper Deck really excels at is creating experiences with fans after the packs are open,” said Jodi Wasserman. “We decided to fly Owen and his dad down for the show. We are big believers in experiential marketing as fans saw recently when we had a family out to a show to meet with our product development team on a new card concept or when we do our kid reporter program around the NHL Draft.”

“I was really impressed Upper Deck would do this for us and I wanted to surprise Owen with this,” said Josh.

Josh told his son they were flying down for a training seminar he had to do, but when they arrived at the show, Owen started to realize something else was going on. Arriving at the massive Langley Events Centre and being greeted by an Upper Deck representative cued him that this wouldn’t be an ordinary Saturday. That may have been the understatement of the year.

The Western Canada Sports Collectors Convention is a massive event that draws thousands of hockey fans throughout British Columbia each year.

Upper Deck had an area set up at their booth sharing Owen’s story. Owen’s dad also made sure to bring his colored pencils and ruler while Upper Deck provided Owen with some blank cards to use as his canvas. Fans in attendance loved checking out Owen’s creations, hearing his story and some even commissioned him to draw some of their favorite Upper Deck cards. 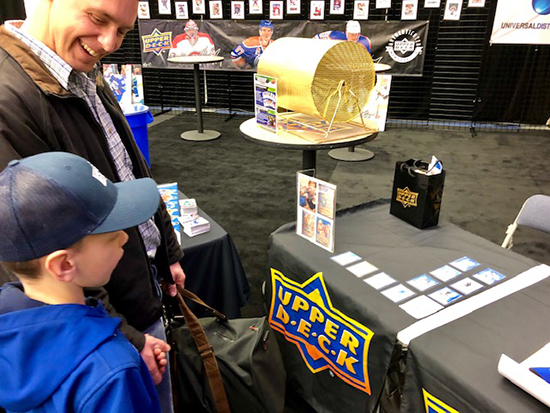 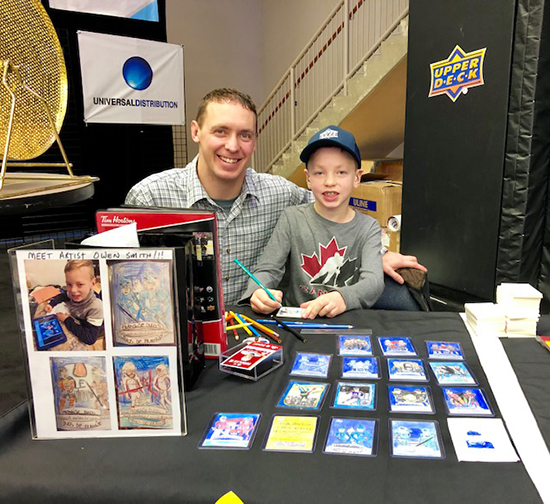 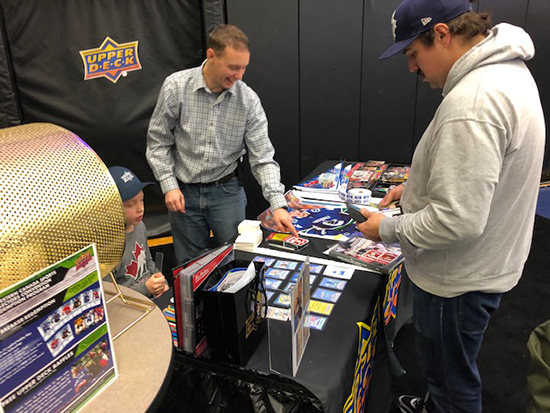 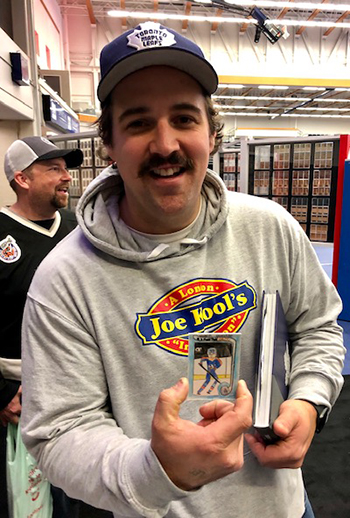 And then came the press. Owen was interviewed by some media about his custom card creations. 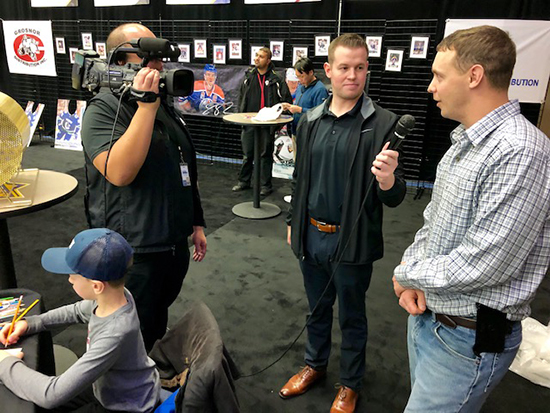 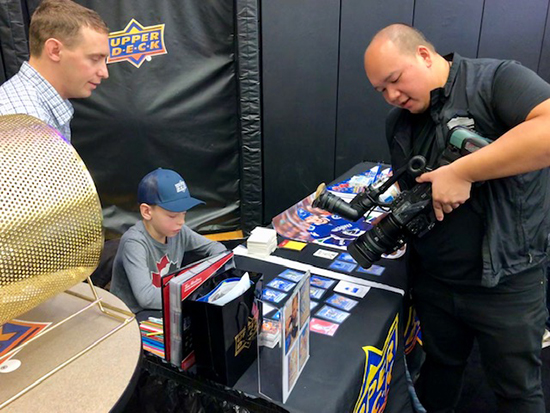 Upper Deck shared a care package with Owen and would you believe it, he pulled two rare insert cards from his favourite team; the Toronto Maple Leafs. 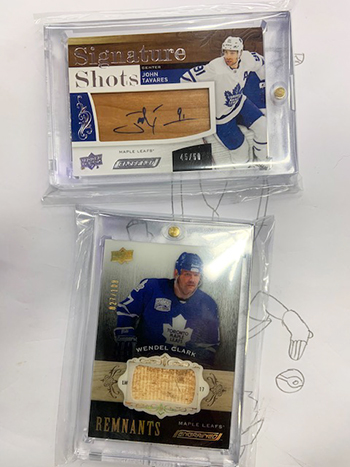 Upper Deck worked with the show promoter to create a variety of special moments for the family. Josh grew up cheering for Doug Gilmour who was appearing at the show. The UD team was able to work to get a special meeting with him where Owen shared a Gilmour card he had created for him. Gilmour loved the custom creation. 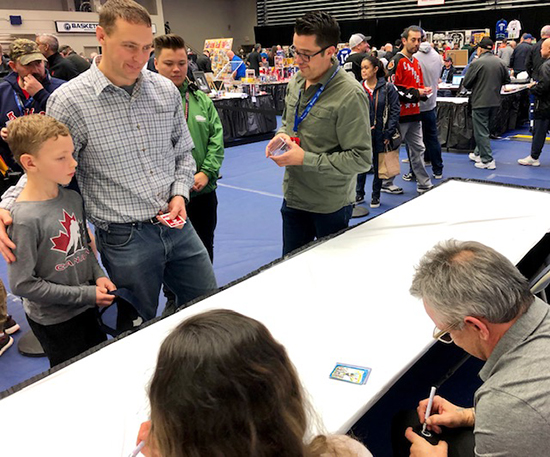 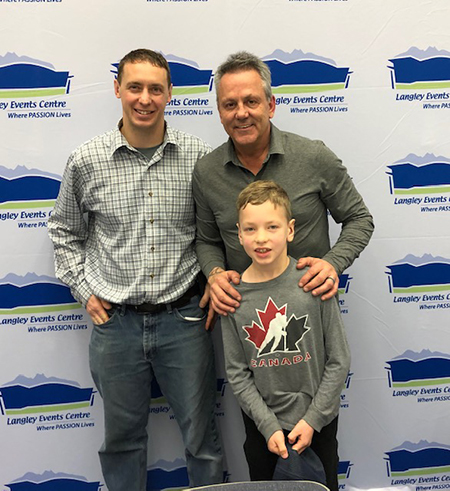 Then came a meeting with hockey icon; Ray Bourque. 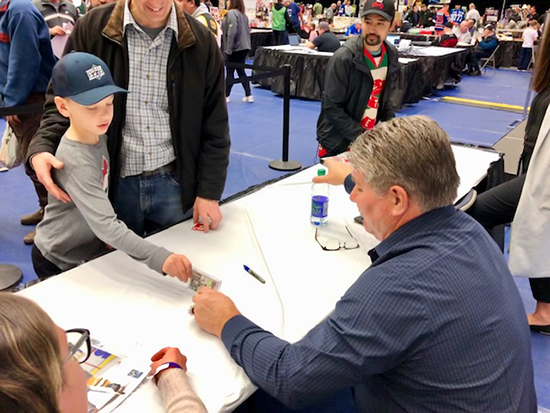 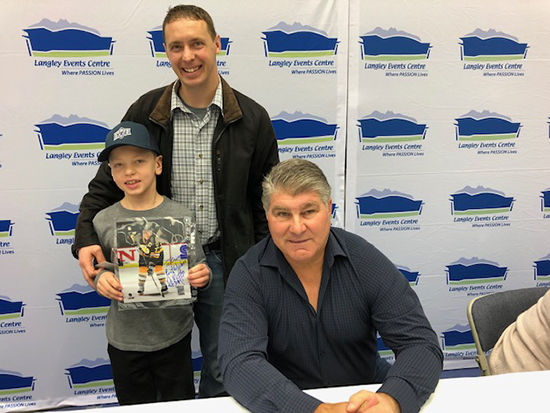 That evening the Vancouver Giants were playing the Edmonton Oil Kings right at the same facility where the show was being held. The show promoter was able to help Owen and his dad get deep in the venue’s underbelly for a couple of fun meetings as well. First Owen met the Giants’ mascot; Jack. 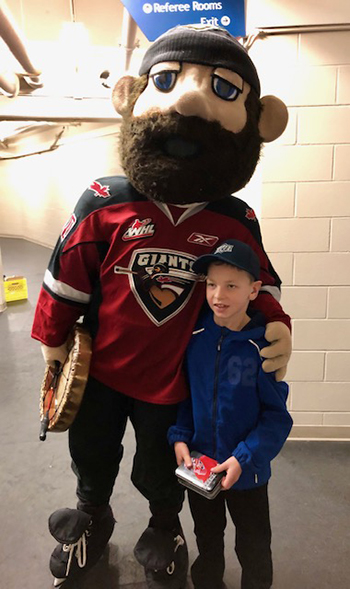 And then, fresh from dropping the ceremonial puck; Owen met Grant Fuhr. After Owen presented Grant with a card he created of him, Fuhr reciprocated by signing the puck he had just dropped and giving it to Owen. What a one-of-a-kind collectible! 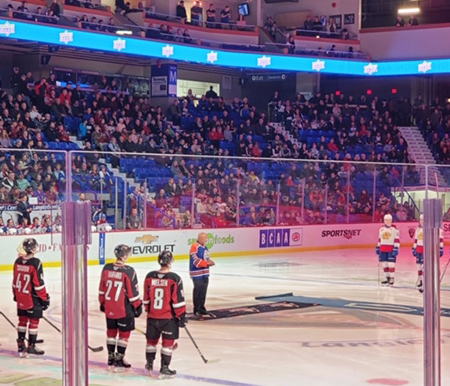 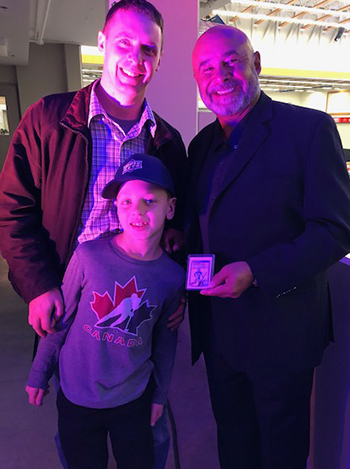 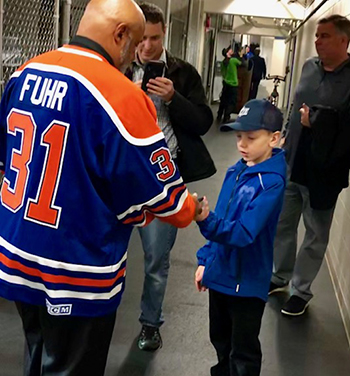 Then Owen and his dad were invited to watch the game from the Skybox with all the dealers from the show. The show promoter also gifted Owen with some awesome collectibles as well. Owen later told his dad is was one of his favorite parts of the weekend. 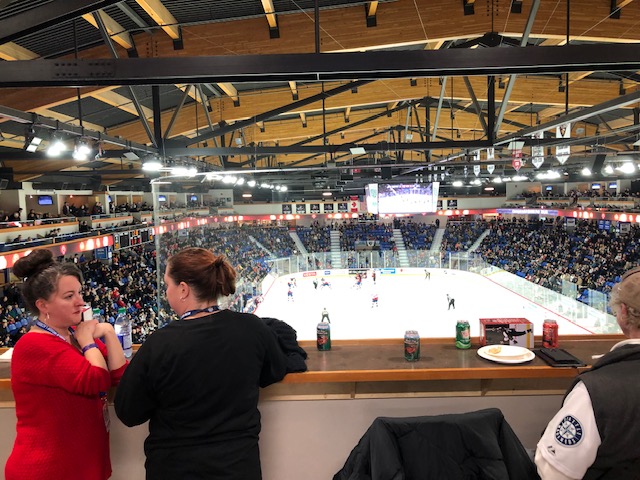 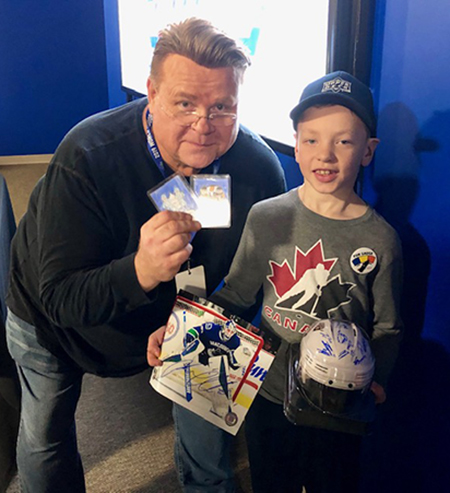 After Owen created a card for the Upper Deck representative that worked with the family the weekend, he decided to do one last thing to make the weekend complete. Owen’s favourite player is Mitch Marner so Chris Carlin worked out a deal with Pastime Sports to get a rare, signed card from the Maple Leafs star to surprise Owen with. Check out Owen’s reaction to that. 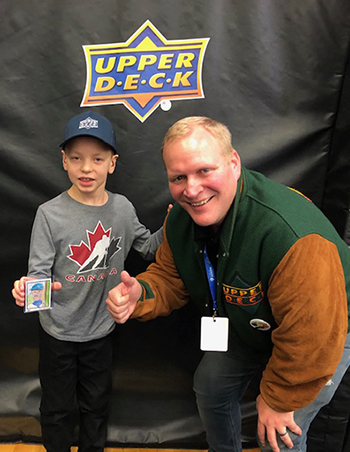 Josh and Owen were very appreciative of the weekend and came home with great stories to share with Owen’s mom and two younger brothers. 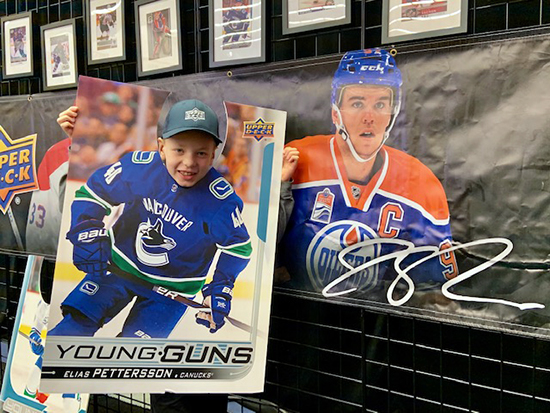 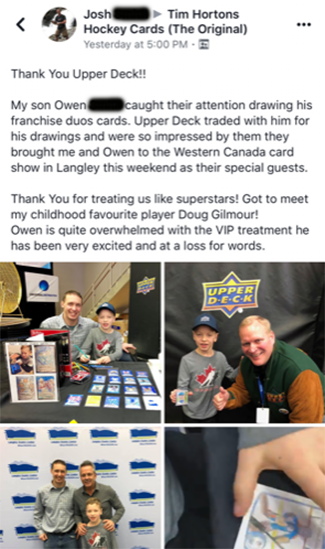 When Josh returned home from work, he was surprised that Owen’s younger brother Ryan (4-years-old) had gotten into the family business as well. Maybe this artistic gene does run in the family after all! 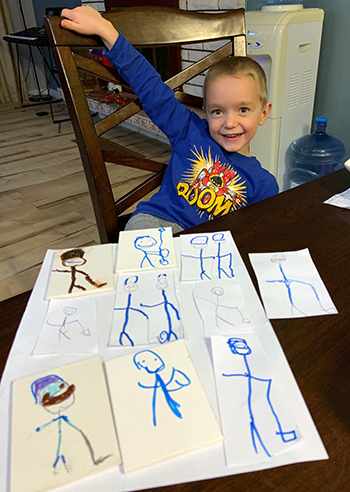