Vs. System 2PCG: The X-Files Battles Card Preview – Trust No One

Hello everyone, welcome to our fourth set of previews for the upcoming Vs. System® 2PCG®: The X-Files Battles, a Giant-Sized Issue of 200 total cards! 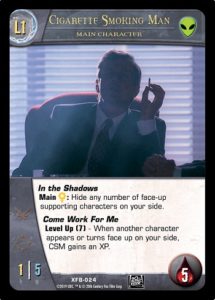 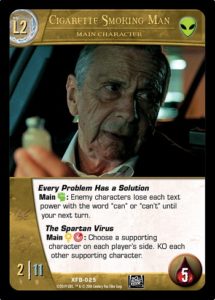 Every Problem Has a Solution counts Keyword, Super, and Level Up text powers with the word “can” or “can’t” in their definition, even if the definition isn’t printed on the card.

For example, the keyword Dodge doesn’t always have its definition on its card but it always means “This character can’t be ranged attacked.”

. It also counts text powers that are granted to a card from another source, like a Plot Twist or an Equipment, but that aren’t printed on the card itself.

Note: If a power says, “This power can’t be turned off.”, Every Problem Has a Solution will try to take it away (because it says “can’t”) but won’t be able to do so.

Led by the CSM, the Syndicate is always pursuing one secret Agenda or another. 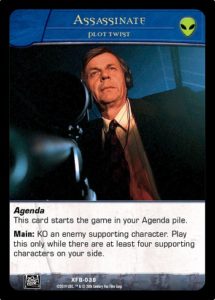 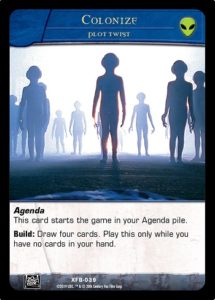 team affiliation, you must choose ONE Agenda with

. It will start the game out of play face down in your Agenda pile.

There are four different Agendas to choose from. (But the other two are a secret for now!)

Speaking of “two”, here’s someone who’s caught between two masters. You can tell that’s true because it says so right on his card: 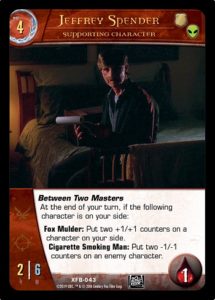 And if you happen to have both of Jeffrey’s “masters” on your side at the end of your turn (which would be  real family affair), you’ll get both of his effects. Note: Jeffrey doesn’t care if you have the Main Character or Supporting Character versions of Mulder and/or CSM.

Next let’s look at a killer who’s a (crew) cut above the rest: 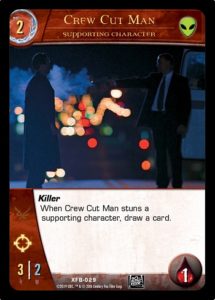 Now let’s take a look at the Syndicate’s, well, Syndicate: 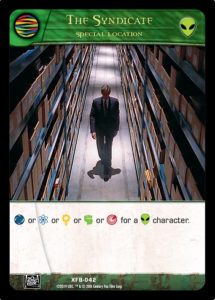 But do you know anyone who uses power symbols? I know someone who uses five of them (sort of): 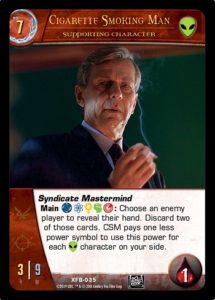 Note: CSM does count himself for the purposes of reducing the cost of Syndicate Mastermind.

See you next time when we’ll show you a Monster (or six) of the Week.