The greatest battles in Marvel history… 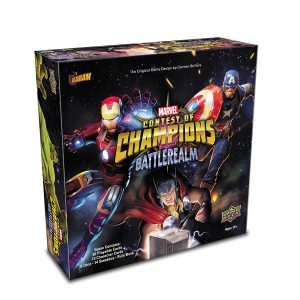 At the start of a game you and your friends will each pick from one of 12 different Marvel superheroes; legends like Iron Man and Black Widow, to relative newcomers in the pages of Marvel comics, like Guillotine. Then you will construct a play area containing a number of different locations. Once these choices have been made you are ready to begin the battle! 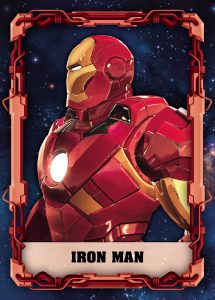 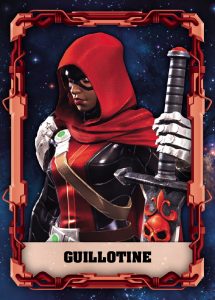 Each turn, as a Summoner in the Marvel Contest of Champions, you will take up to six custom dice and see what powers you can unleash on your opponents. You may reroll the battle dice up to twice during your turn. Each of the battle dice has six sides with six different icons that allow you to perform different actions or unlock special abilities! You must arrange the icons in the best possible way to unlock your own hero’s unique powers, make a variety of attacks, move among the many locations and best utilize the properties of the Battlerealms. 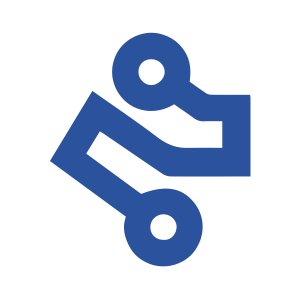 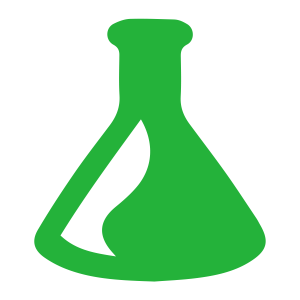 It is important to not only eliminate your opponent’s PVP points by carrying out attacks against them, but you must also move around to the various Battlerealm locations to earn additional PVP points for your own hero. If your PVP points fall too low your opponents may consider you a vulnerable target and press home the attack against you. Should your PVP points ever fall to zero, you are knocked out of the game!

When you have reduced one of your rivals to zero PVP points you are that much closer to victory, not only does this remove one of your adversaries, it also increases your own PVP total by three points. There are two ways to win Battlerealm; either be the first hero to reach 21 PVP points or defeat ALL the other heroes!

Keep your eye on our blog and social media as we dive deeper into Marvel Contest of Champions: Battlerealm in the coming months before it releases at your local game store in Summer 2018!