Welcome to an alternative Marvel Universe set in the dark gritty world of hard-knuckled detectives. It’s a grim take on the Roaring Twenties and Depression Thirties with tangled mysteries, flawed Heroes, corruption, betrayal, and moral grey areas. It’s a world immortalized by the Classic Marvel comic series that recasts their Heroes as unique Noir versions. Welcome to Legendary®: Marvel Noir.

Spider-Man Noir is haunted by the death of his Uncle Ben in a city that is strangled by a crime boss. This Spider-Man wears a black trench coat, mask, and carries a revolver as he ponders who to trust and how to take evil down. 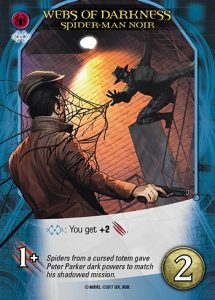 Daredevil Noir is blinded when his boxer father is murdered for refusing to throw a fight. In this world, Daredevil could never afford law school, so he runs errands for Foggy Nelson Investigations by day and hunts criminals by night. 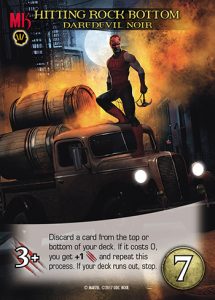 Luke Cage Noir becomes famous for surviving a point-blank gunshot. Does he really have unbreakable skin, or is there a trick up his sleeve? He’ll need all the appearance of invincibility he can muster to find out who set him up. 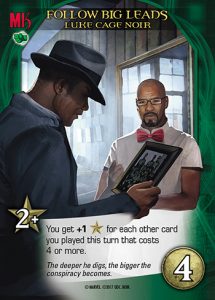 Iron Man Noir travels the world as an archaeologist and inventor, searching tombs for lost relics. When his lover betrays him to Hydra, Iron Man needs to create his greatest invention yet: a clunky but strong steam-powered suit! 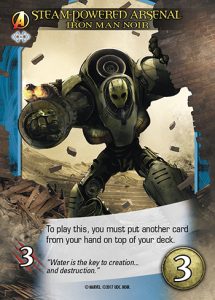 In a world where Warren Worthington dies young, Thomas Halloway is Angel Noir, a pulp detective and surgeon who learns the working of the criminal mind from being raised in a prison. Thomas struggles for control with his ruthless identical twin brother Robert Halloway – Or is the struggle all in his mind? 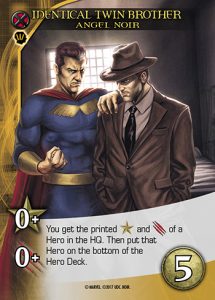 Join us next time as we investigate further into the workings of this newest expansion.

If you missed any of our other card previews, click below to be taken to them.


For a 7 pointer, that Daredevil Noir card seems very week. Most of the time, it’s no better than the IronMan Noir card shown.


Daredevil’s rare does seem weak, but I have to imagine his other cards further enable this card. Or just the now revealed investigate keyword letting you see and set the top or bottom of the deck. That could get pretty nuts if you’re building your deck properly.


Woo-Hoo!
Can’t wait! Thanks for the tantalizing sneak peak!


Hope there will be new keywords as well. Artwork is nice but shown mechanics are vanilla yet.