The Legendary® Encounters: An Alien™ Deck Building Game Expansion includes two all new Hives with stories created exclusively for this game. Each has a Location, three Objectives, and three Hive mini-decks. You can play them by themselves or mix and match them along with the original Hives. This is one of those stories.

Decades after the Auriga Disaster, The Company has set up a new facility to breed and control Xenomorphs. 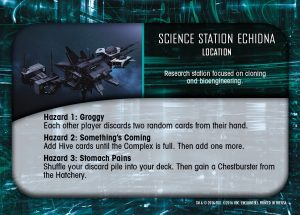 The station is packed with security guards… 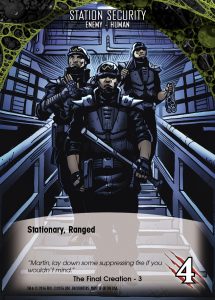 …who use command collars to control the Xenomorphs. 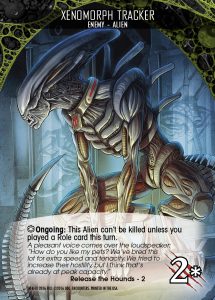 The scientists have also learned that Xenomorphs take on the characteristics of their host organisms. In an effort to breed Xenomorphs with specific augmentations, the Company has invested in advanced cloning procedures.

The process is simple: each clone is created with certain heightened characteristics such as Strength, Intellect, or Survival instinct. The clone is then used as a host, resulting in a Xenomorph with the same kind of enhancement. 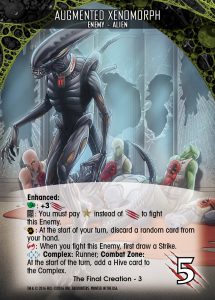 This Hive introduces the Enhanced mechanic to Legendary Encounters. It works like this:

When an Enhanced Alien is revealed, put the top character card of the Barracks face up underneath that Alien. That card represents the host that Xenomorph was born from. The class symbol on that card determines which of the five different enhancements is active on the alien. (Inactive ones are ignored.)

If the host turns out to be a character with two class symbols, the Xenomorph will get both of those enhancements. When an Enhanced Enemy is killed the character card is placed at the bottom of the Barracks.

It all seems pretty straightforward. Clones are grown and given enhanced capabilities. They are then impregnated via a Facehugger. And finally a newly enhanced Xenomorph bursts out of their chest.

So where do you fit in? You’re one of the clones. 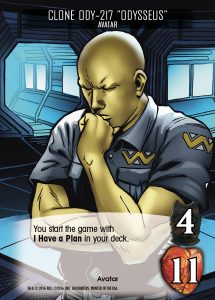 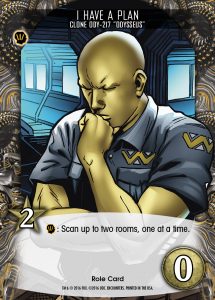 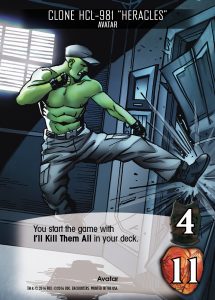 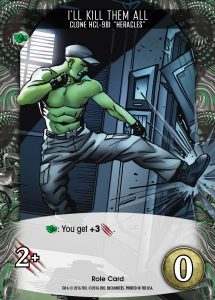 You wake up in a room full of Facehuggers. But moments before they can attack, Clone #981 “Heracles” uses his enhanced strength to break out of his restraints. He frees you and the others. And as the alarm sounds and guards rush in, you have just one goal: escape.

We hope you enjoyed today’s preview. Tune in next time for a preview that focuses on motherhood. The Legendary® Encounters: An Alien™ Deck Building Game Expansion hatches in stores this December 7th and is available for pre-order now at your favorite local gaming store.


This looks so fun!


That’s a brilliant scenario. You guys rock. For my wife and I, these games are the highlight of Christmas vacation… playing a lot of the new Legendary Encounters. 🙂

I’m curious; we would’ve expected (both in the Predator game and this one) the use of the AvP films (and/or the recent Predators film) for scenarios. Are these potential for a future expansion? Or a no-go because of rights/licensing issues maybe? Or are future plans just too classified to say?

Either way, super-stoaked for this one… already pre-ordered! Meantime, we’ll just go back to our futile efforts to defeat the Danny Glover ultimate prey. Man, that guy is killer…