I’ve always liked collecting stuff even when I was little. My collecting in general started off with pressed pennies from different places I’ve been and moved onto soccer cards when in high school. I use to play soccer and went to a ton of games so collecting Upper Deck soccer cards pretty much started me on collecting cards in general. I use to love to meet players after the games and get my cards autographed. Collecting soccer cards definitely was the reason I thought to start collecting hockey cards presently.

Fast forward to a few years ago I became a godmother to my godson Jack. I was trying to think of something I could collect that I could add to every year for him and one of the ideas I came up with was Upper Deck NHL® Young Guns rookie cards. Jack’s father is an avid Boston Bruins fan like me and I felt Jack would grow up loving hockey too. Ever since Jack was born I have been collecting the Young Guns and Young Guns Canvas cards for the 1st overall draft-pick and Calder trophy winner for him. Needless to say that with the last bunch of top overall draft-picks and Calder winners, Jack has accumulated an awesome collection that he doesn’t even know about yet being that he’s only 4-years-old. 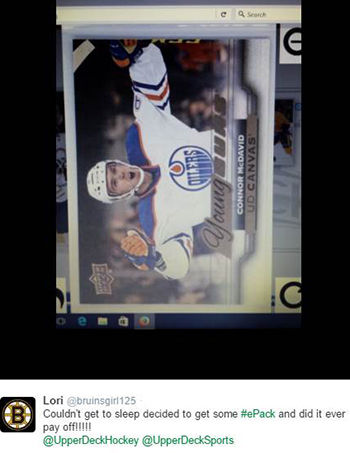 The way in which I track these cards down however go much easier this year with the debut of Upper Deck e-Pack™ which makes acquiring cards for your favorite teams and players easier than ever. With Upper Deck e-Pack™ I was able to acquire both a Connor McDavid Young Gun and Young Gun Canvas for his collection along with both Young Guns for Artemi Panarin. In starting a collection for Jack I ended up starting a Bruins collection for myself and have amassed a pretty awesome collection if I do say so myself. What is cool is that I can store them on the e-Pack platform and ultimately transfer them over to his own account when he is old enough. 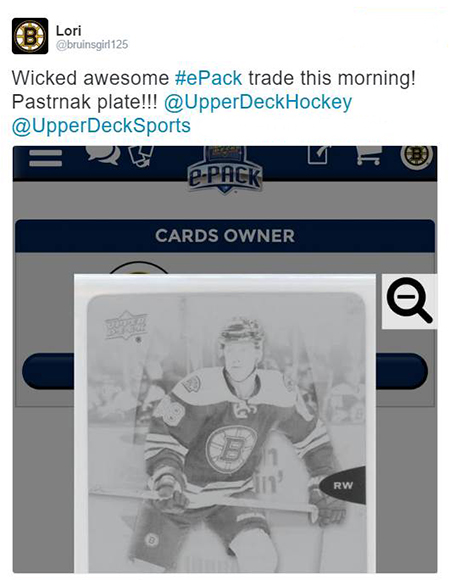 Trading on the e-Pack platform has allowed me to pick up some cards I might not have been able to get any other way. I’ve been able to trade for a Clear Cuts Foundation card of Bergeron and Pastrnak (limited to just 25 copies), a Vatrano High Gloss Young Guns card (limited to just 10 copies) and most recently a Pastrnak one-of-one printing plate card and Super Scripts cards from 2016-17 NHL MVP (limited to just 25 copies). I have tried to purchase the Clear Cuts Foundation card on eBay a few times prior to e-Pack and have missed out with the auctions, but thanks to trading on the e-Pack I was able to obtain a card I’ve wanted since I first saw the checklist for Upper Deck Series One. I love how Upper Deck has made trading so easy to pick-up cards for my personal collection with e-Pack. And with #TradingTuesdays, I can use Twitter to find great trading partners too! 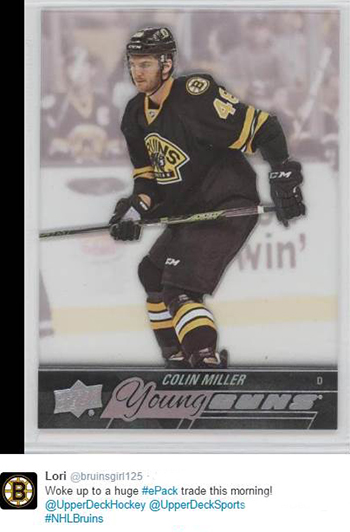 “Lori Doucette is an avid Bruins fan from Massachusetts and has been collecting since 1998. She’s known as @bruinsgirl125 on twitter and loves to share all things collecting especially Upper Deck Hockey cards!”