When I was a kid, I dreamt of playing in the NHL®. Eating, breathing and sleeping hockey was a way of life for me. I collected hockey cards wanting to be just like the players depicted on them. As I grew older my dream of playing in the NHL was no longer attainable, but my love for the game remained.

I also still carry with me my hockey card “addiction” – as my wife likes to call it.

This year when the Upper Deck e-Pack™ platform was introduced, I wasn’t sure about it until I gave it a shot. I liked how I could now open packs, boxes and cases from anywhere and anytime. Also, the organized ease of seeing my collection from my computer, tablet and smartphone. I also liked how I didn’t have to worry about the mess and waste of wrappers and cardboard boxes, and that many of the cards in my collection could actually be shipped to me. That’s right you read that correctly; these are not just digital cards but physical cards! Freeing up space in my house by having the cards all stored online and with COMC was like scoring a Stanley Cup Playoff game winner as my collection could easily take up a large majority of any room! 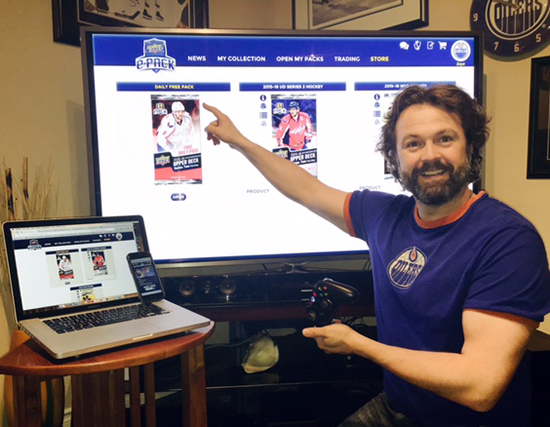 There are a variety of platforms to access Upper Deck e-Pack on!

Recently I created a Facebook page dedicated to fans who wanted to trade on the Upper Deck e-Pack™ platform. Check out the Facebook Page for e-Pack Trading here: https://www.facebook.com/upperdeckepack/

We are also on Twitter, but most everyone keeps track of what is happening on e-Pack using the #ePack hashtag. Also now to promote trading, Upper Deck is going to be retweeting anyone who wants to trade on their @UpperDeckHockey account for #TradingTuesdays! Make sure you hit them up every Tuesday if you are looking to trade on e-Pack!

If you haven’t experienced the new Upper Deck e-Pack™ platform, make sure to check it out at: www.UpperDeckePack.com

Stay tuned for some fun Facebook and Twitter events this summer around #TradingTuesdays! And check out this fan video that gives some really good insight on the Upper Deck e-Pack platform including trades!

Boyd Zacher is a husband and father of three great kids. He has been a card enthusiast since he was a young boy and he enjoys playing hockey with a local recreation league team. He works full time as a Master Layout Mechanic & plays a role as an EarthWatch Fellow to help protect the environment whenever possible.