Vs System® 2PCG™: The Alien™ Battles – We Always Have a Synthetic On Board

Synthetics, or as some prefer to be called “Artificial Persons” are biomechanical humanoids. They are essentially robots that closely emulate Humans in both appearance and actions. The Company builds and uses Synthetics to help their Human counterparts or to carry out secret Company missions.

Ash can be a hand full if left unchecked.  The original science-officer-turned-killer-robot’s Special Order ability allows players to send him into an opponent’s camp. He won’t lie to them about their chances, but at least they have his sympathies. 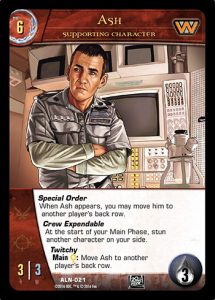 Other Synthetics are certainly full of surprises. Call is willing to help anyone, because no human being is this humane. 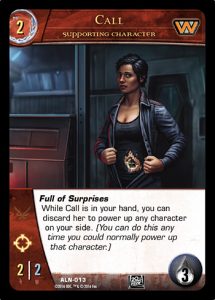 Players can use Call to power up even if they do not have another Company character on their side.

We hope you enjoyed today’s preview. Tune in next time for the answer to the age old question: “What do you get when you cross a human with a Xenomorph?”