Vs System® 2PCG™: The Alien™ Battles – Sometimes You Just Need a Hug

Xenomorphs have a pretty simple method of reproducing:

The Queen lays an egg.

The egg hatches a Facehugger.

The Facehugger attaches itself to a host organism’s face and impregnates it with a Xenomorph embryo which later on bursts out of the host’s chest and then quickly grows into an adult Xenomorph and tries to kill all nearby non-Xenomorphs.

The process in Vs. System 2PCG: The Alien Battles is about the same: 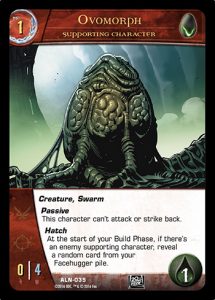 When a player’s Ovomorph tries to hatch, they will need to reveal a card from their Facehugger pile, which includes three Facehugger token characters and one Extended Incubation card. 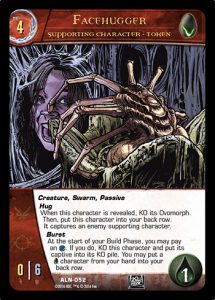 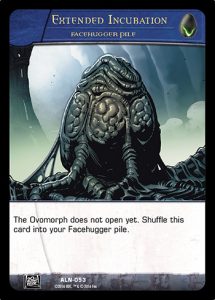 This uses the new “Capture” action:

At the start of the Facehugger controller’s Build Phase, they may pay a

, to have a brand new baby Xenomorph burst out of the Captive’s chest. The Captive and Facehugger are placed into their owner’s KO piles, and a

character can be put into play from the Facehugger controller’s hand.

So, what happens if Professor X or Purple Man is used to take control of an opponent’s Ovomorph? It will still try to hatch as before, but that player will use its owner’s Facehugger Pile.

We hope you enjoyed today’s preview (and maybe even learned something about the way baby Xenomorphs are born). Until next time: Happy Hugging!


August 17th? After Gen Con?
Does this release date mean this set will not be available for play at the 10k?


This will be available at Gen Con. The street release date, or the date that it will be in stores, is August 17th.


To be clear, the Aliens set will be available at Gen Con and legal for play in that tournament. But it will not be available for purchase elsewhere until the 17th.
Are both those statements true?


So will this be allowed in the tourney? Will there be a limited number of sets for sale?