Back in February Upper Deck Gallery begun a unique series of Japanese Woodblock prints that showcased members of The Avengers locked in battle with an unknown evil. Hawkeye and Black Widow kicked off the fray in their very own individual lithograph posters. We saw the mighty heroes taking on what appeared to be serpents causing destruction. Today the enemy has a face and it is the wicked trickster god Loki. “Out of all the great Avengers villains, Loki seems the most timeless and diabolical,” said artist Marcelo Baez. “These traits transport him seamlessly into an Ukiyo-e type serpentine demon spreading his evil across the land.” But as Loki expands his devastation, the heroes are joined by two more members of the iconic Avengers. 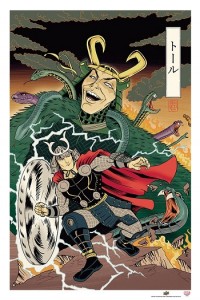 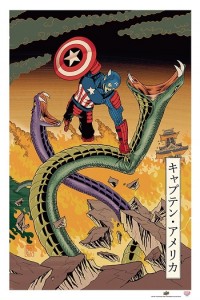 What battle with Loki would be complete without him facing off against his brother Thor. Artist Marcelo Baez shows us what the Thunder God of Norse mythology might look like if he resided in Feudal Japan. Also standing in Loki’s way is Captain America showing off his incredible strength and keeping his iconic shield close at hand. These two new 12”x18” lithographs are the Third and Fourth release of a Six print set and limited to only 250 hand numbered copies each. Pick them up now for only $29.99 each. Separate they each focus on one of the Avenger’s style and abilities. As a set, they take shape to show how well this team looks and works together.

The final two lithographs for this set will be released in the Fall of 2016. Sign up here to be the first to receive information on this set and other items from the Upper Deck Gallery.

Just like with the earlier Hawkeye and Black Window posters, the Thor and Captain America lithographs are also being released with their sepia toned variant. 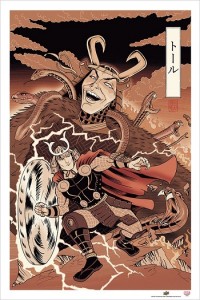 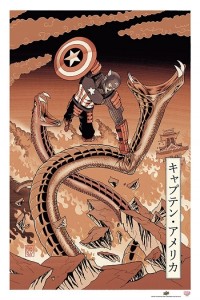 This muted color version gives these already impressive items a more classic look worthy to be found on the walls of ancient fortresses. Like their multi-colored counterparts these 12”x18” lithographs blend beautifully together as a set, but unlike the others they are only limited to 100 hand numbered copies of each and can be purchased for $49.99 per lithograph.

The final two lithographs for this set will be released in the Fall of 2016. Sign up here to be the first to receive information on this set and other items from the Upper Deck Gallery.