Happy Monday and welcome to our second preview for the new Vs. System® 2PCGTM expansion, “Defenders,” releasing on January 27. Last week we showed you one of the new Main Characters for the Defenders team, Luke Cage, plus his Hero for Hire partner, Iron Fist. If you missed that article, you can read it at https://www.upperdeckblog.com/?p=20736.

Today’s preview talks about two contrasting ways your Supporting Characters can help you win. When playing any game, you’ll find that there are times you want to be aggressive and play offense. On the other hand, there are often times when playing a controlling, defensive game will give you the best change of coming out on top. It’s up to the player not only to switch gears appropriately between those two during play, but to figure out how much of both styles to incorporate during the deck building process itself. The two cards we have today will show you both ends of that spectrum.

First, we’ll take a look at the more aggressive card of the two, and a very popular character in his own right: Moon Knight. 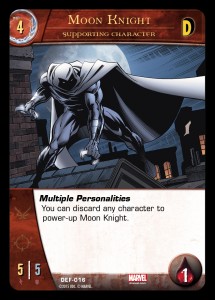 Moon Knight is a 4-cost supporting character with a very solid 5 ATK and 5 DEF. Compared to all of the 4-drops in Set 1, only Beast (5/2) and Nova (also 5/5), plus Sabretooth (only when attacking) can stun Moon Knight without outside help. On top of that, Moon Knight’s Keyword power, Multiple Personalities, affords him staying power not just on Turn 4, but even on later turns as an underdrop. Being able to discard any character gives Moon Knight an easy avenue to powering up. While you can certainly discard another Moon Knight to power him up, you might rather use a different character instead. Also, Multiple Personalities gives you something more you can do with lower-cost characters late in the game, instead just putting them face down in the Resource Row, and in the process, Moon Knight gets more powerful. Attacking up the curve is very powerful in Vs. System® 2PCGTM, and Moon Knight gives you a very reliable way to do just that. 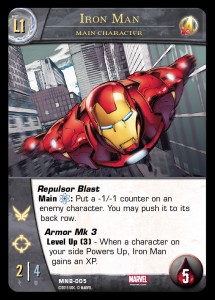 His Level Up power gives him XP whenever a character on your side powers up, and it only requires 3XP to get him to Level 2. There are certainly times when you draw the dream hand and can power up Iron Man or your 1-Drop quickly, so you can level up Iron Man very early. However, there also are times when this doesn’t happen. If Iron Man is your Main Character, Moon Knight provides insurance and consistency. Sure, you can still achieve “The Dream” every now and then for a Turn 1 Level Up. But even if you don’t, Moon Knight can ensure your Main Character is leveled up at a reasonable time, and often it will still happen before your opponent. There are more Main Characters from Set 1 who Moon Knight will help level faster, so make sure you take another look through them. One of the most fun things about an expansion is revisiting cards in previous sets to figure out what neat new combos you can put together!

Moon Knight is a great example of an aggressive, offensive card that wants to win the game by punishing your opponent in combat. However, our second preview card of the day is all about control. Much like her comic counterpart, Scarlet Witch’s goal is to disrupt your opponent’s strategy. Even if you don’t execute your own game plan at breakneck speed, her influence can dramatically swing the battle in your favor for no other reason than from her simply being on the field. What does she do that’s so powerful? Check it out for yourself: 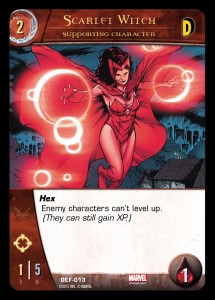 We don’t blame you if you had to do a double take just to make sure you read that correctly. Scarlet Witch’s Hex flatly denies your opponent’s characters from being able to leveling up. It’s worth mentioning that a couple of rules apply here. First, a character can still gain XP while Scarlet Witch is around. However, it cannot gain more XP than its Level Up number. So in the case of Iron Man above, Iron Man would never have more than 3 XP no matter how many characters you powered up while Scarlet Witch is preventing Iron Man from leveling up. Second, if the opponent’s character has as much XP as its Level Up number (ex: 3 for Iron Man), when your Scarlet Witch gets stunned or leaves play, that character will level up immediately. How much time she can buy you depends on how effective your defense is. Even a turn or two could be enough to push the game out of your opponent’s reach. Are you the type of player that likes to make your opponent squirm as you deny his or her deck’s strategy? If so, then Scarlet Witch is the card for you!

Which card is your favorite and what strategy do you think you’ll use? Let us know in the comments! In the meantime we’ll be back on Wednesday with another early look at Defenders, when we’ll show you one of the Main Characters from the other team in this set. They need their face time, too!


Seems more like the West Coast Avengers since Iron Man was never a Defender, and Moon Knight and Scarlet Witch are really second rate Defenders drafted later on around Defenders issue #112. I’d like to see some real Defenders such as the core four, Namor, Hulk, Silver Surfer, and Doctor Strange, and maybe the 2nd tier characters who became the regular team for the last 52 issues or more. Nighthawk, Gargoyle, Hellcat and Valkyrie and Son of Satan.