Do Not Miss Your Opportunity to try Upper Deck’s 2012 SP Signature Edition Baseball for FREE!

When I tell people I work for Upper Deck the first thing they ask me about is baseball cards and usually the 1989 Upper Deck Ken Griffey Jr. rookie card. Upper Deck and baseball go together like mustard on hot dogs. So it has been disappointing for so many here at our corporate headquarters that licensing changes have greatly hindered Upper Deck’s ability to put out new baseball products. We have had some successes however like 2011 SP Legendary Cuts Baseball which was a product that consisted almost entirely of imageless cards, but we were able to come up with compelling designs to make it work.

We have a very passionate group of creators just busting at the seams to produce new baseball releases and when we first shared the idea of 2012 SP Signature Edition Baseball with a small group of distributors and shops, we received a favorable response. With autographs from 50 Hall-of-Fame players (including some who are now deceased) and a bevy of current stars and prospects, we believed we could build a checklist with a lot of fire-power for collectors. And with ZERO redemptions in the product, we knew we were coming up with something collectors would appreciate. Unfortunately we were not able to promote the product before release, but take a listen to Upper Deck’s product manager Grant Sandground as he shares what it took to bring this set to market and why 2012 SP Signature Edition Baseball provides an exciting pack opening experience.

The folks at Beckett recently had their opportunity to get a chance to check out 2012 SP Signature Edition Baseball as well. Take a listen to what they thought and what they pulled:

And there have been some pretty significant cards pulled from the product giving collectors a reason to smile. 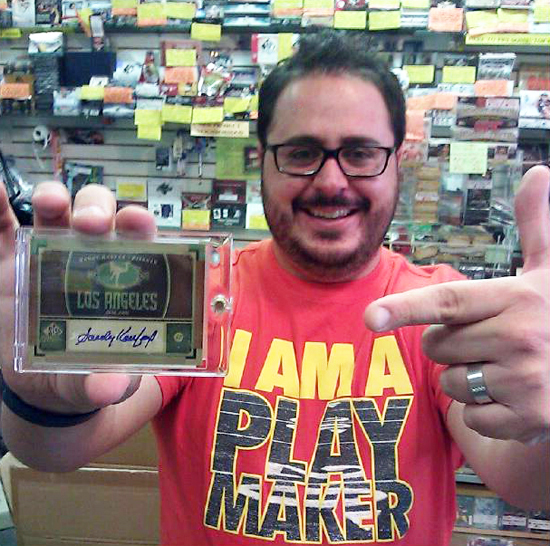 A collector smiles after pulling a Koufax autograph card!

We frequently hear at shows that fans miss seeing new Upper Deck baseball products and we have seen many going back to older releases just to get the value and content they miss. Additionally, we have also seen independently created groups like this one on Facebook who are rallying to see Upper Deck back in baseball. We appreciate that a strong fan base for Upper Deck’s baseball products still exist and to thank fans for their support and to give them a chance to experience the first stand-alone baseball release in over a year.

We want to give you a chance to open a pack of 2012 SP Signature Edition Baseball and try it out for yourself for FREE! All you need to do to participate is to review the short print checklist from the set and share in the comment section below which baseball player is your favorite in the set and why you would love to pull an autograph card of them in three sentences or less. We will give out twelve (12) packs to fans who most skillfully submit a compelling comment by 2:00 p.m. on Friday, July 13. We are using most of our sample packs with collectors here for this product as we truly want the fans to experience 2012 SP Signature Edition Baseball for themselves!

For those who score a free pack, let us know how you do on the Upper Deck Facebook page or on Twitter!


I’d love to pull a Jeter Auto. I’m a life long Yankees fan and he’s one of the few baseball “stars” who’s been consistent throughout his whole career. Just seems to be a great card to pull for me!


the ultimate card for me would be the bryce harper auto. what more could you ask for with an exiting new release from u.d. than the most exiting new player. welcome back upperdeck. hope theres more to come.


I would like to pull a babe ruth or lou gehrig cause they aren’t in there… too bad!


I would absolutely LOVE to pull a Ken Griffey, Jr. autograph. When I was a kid, I sent him a Donruss RC with a short letter asking him to autograph it, and never got it back. Pulling one of his autos would totally make up for it!


Would love a Joe Carter auto. remember watching that game when he hit the massive home run vividly. Watching it with my cousins after a halloween school party and us all going crazy when that ball went over the fence !!


I’m thinking Bo Jackson would be my favorite at the moment. What more can you ask for…2 sport superstar!


Too late but will post anyway.
What a tough decision since Cal Ripken Jr. is my favorite player. But I would love a Louis Tiant auto. Growing up, my friends and I would immitate his windup with that complete turn to 2nd base.


Just out of curiosity, Have winners been declared for this generous contest? (If so, who were the lucky winners?)


i would like to pull a sandy koufax because he is one of my favorite pitchers of all time, and because i am a dodgers fan since i live neer LA. I also want his card because he is a huge part of dodger history.


Cal Ripken Jr. the IRON MAN not only in baseball but in life it self.
never heard a bad thing about him, no drugs or law problems, always improving the community.