How Upper Deck Made My NHL Trading Cards Come to Life

My mom entered me into a promotion sponsored by Upper Deck trading cards to be a Draft Runner at the 2012 NHL Draft in Pittsburgh. I didn’t know she had done this and when she told me that we won while on vacation, I wanted to go home right away so I could tell all my friends. I am a HUGE hockey fan so for me, this was a dream come true.

My 2012 NHL Draft experience began on Wednesday when I went to the Consol Energy Center to obtain my credential. At that moment it suddenly all felt very real, I was going to be a part of one of the biggest NHL events of the year! 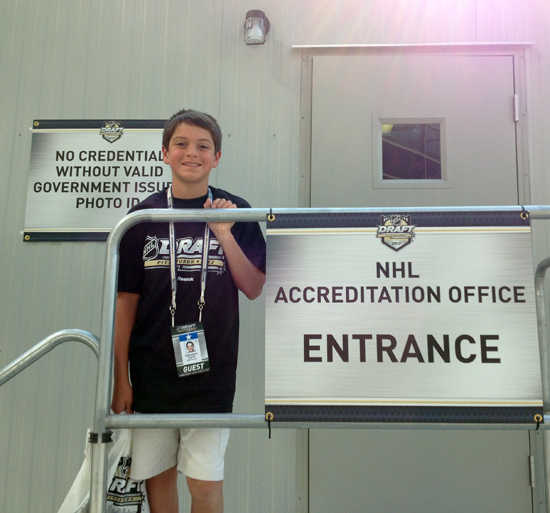 And then I got my first taste of what it’s like to be a player in the NHL as I got to spend some time with the media. I was interviewed by Meredith Qualls of the Pittsburgh Tribune Review for a story on how I won the Upper Deck Draft Runner Contest. That evening I was asked to be on Card Board Connection Radio with Rob Bertrand and Doug Cataldo. I was a little nervous at first then I felt better as I realized it was just talking about my family and hockey. It was my first time on the radio; awesome! 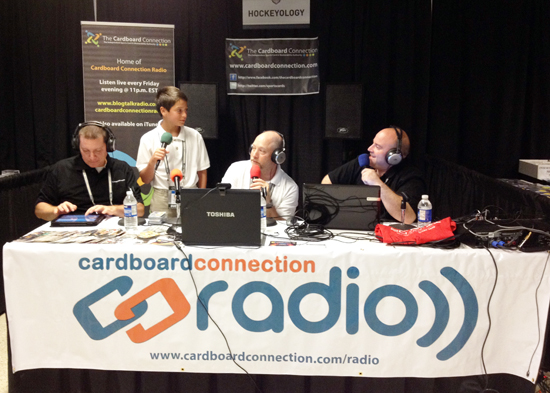 On Thursday I attended the NHL Runner’s meeting to learn about my duties, schedule and dress code. I was thrilled to be assigned to the Tampa Bay Lighting team! My 2 favorite players from the Lightning are Vincent Lecavalier and Martin St. Louis. Only the media was at Consol at that point so after the meeting we were allowed to walk around. You could feel the energy in the arena as I realized every NHL coach, general manager and all the draft picks would be here in less than twenty four hours. 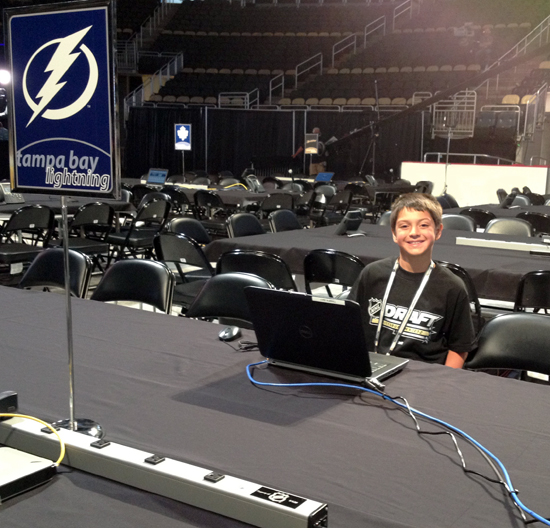 I was ready for the Draft!

It was also very cool to walk through the entrance to the Pittsburgh Penguins tunnel where they enter and exit during game time. My mom and I walked around the entire arena checking everything out. I was so excited that I had a hard time sleeping Thursday night. I called all of my family and friends to have them record the NHL Draft just in case they could catch a glimpse of me. 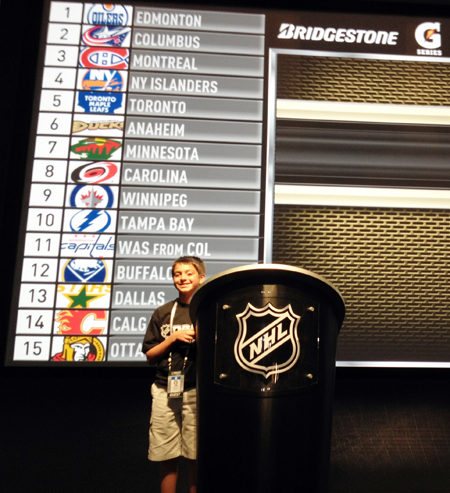 I hope to one day stand on this stage after being drafted by a NHL team!

I woke up on Friday and realized this was the big day. I did not have to report to the arena until 6:00 p.m. so it felt like the longest day of my life! Ray Fittipaldo from The Pittsburgh Post Gazette called and requested an interview before the Draft. I could get used to all this attention!

Before the 2012 NHL Draft began, I went to the Dick’s Sporting Goods booth to try out the new CCM Taylor Made Hockey stick – it was unbelievable! I shot a puck 48 MPH! I stopped to see Ken Amorosa at Steel City Collectibles who my mom submitted my entry through. He got a big hug for helping me get this opportunity! 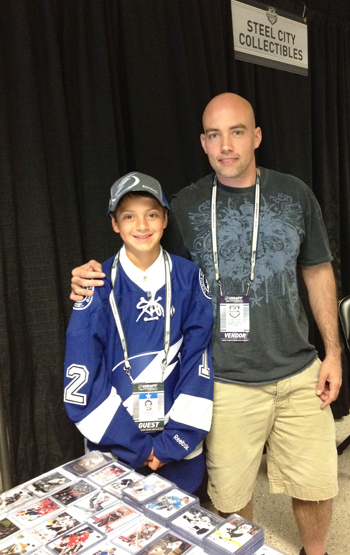 Thanks Steel City Collectibles for submitting the essay to Upper Deck!

I dropped in to introduce myself in person to Cardboard Connection Radio with Rob and Doug and they put me on the air! And last, but not lest, I stopped by the Upper Deck Booth to thank Dianne and Ryan for the great opportunity. Diane gave me a ton of hockey cards, what a great way to expand my collection! Dianne had an Upper Deck NHL Draft card made of me in a Penguins jersey right on the spot. I was so pumped! 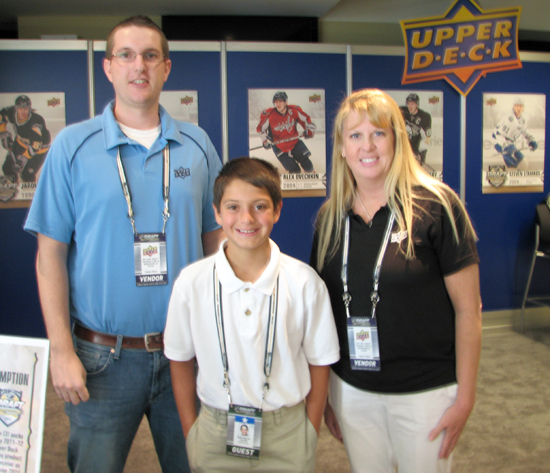 Ryan and Dianne from Upper Deck were really great!

It was time to start my duties so off to the Consol Energy floor I went! My mom gave me a big hug and gave me some instructions, “Be a gentleman, use your manners and enjoy ever minute of this!” I walked over to the Tampa Bay Lightning table and the introduced myself to Guy Boucher (Tampa Bay Head Coach), Steve Yzerman (Vice President and General Manager), Pat Verbeek (Assistant General Manager and Director of Player Personnel) and Al Murray (Director of Amateur Scouting). Never in a million years would I have thought I would be sitting at a table with Steve Yzerman; boy was I intimidated! I kept my cool, but I was really nervous. 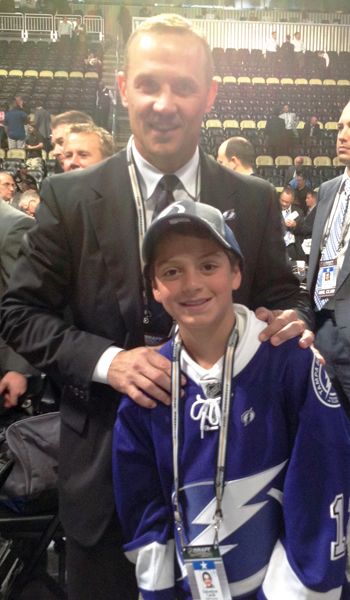 I couldn't believe I was spending two days working with Steve Yzerman!

The Tampa Bay Lightning executives and staff made me feel right at home with them. Mr. Murray in particular was very nice and asked me a lot of questions. My main duties were to deliver refreshments for the table. All of the draft selections are electronic now so I didn’t have to run a paper back and forth to the main NHL desk any longer. 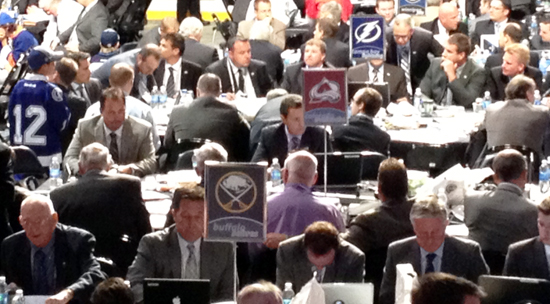 Being on the floor of the 2012 NHL Draft was an incredible experience!

Tampa Bay had 2 picks in the first round and took Slater Koekkoek at #10 and Andrei Vasilevski at #19. These are names I am still learning to pronounce. It was exciting waiting to see who would be drafted to each team and watching the family’s expressions as their relative’s names were announced. I did whatever I was asked and it was a really awesome experience. At the end of the night, I thanked all the Tampa Bay guys and told them I would see them in the morning. 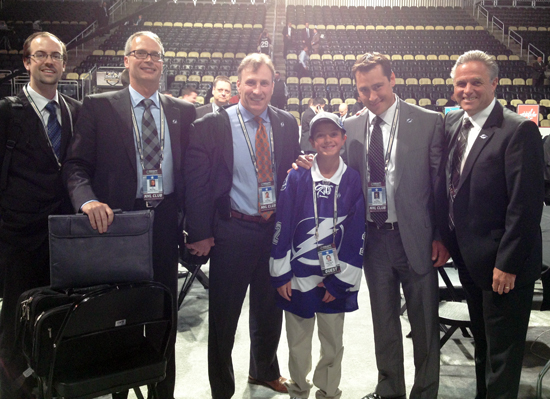 The gentlemen from the Tampa Bay Lightning were all really great!

As I was going to meet my mom, I looked up and there stood my favorite NHL player of all time; Mario Lemieux!  I was in shock! I told him, “I love you and I love hockey!” Mario said, “I love hockey too buddy.” Luckily my mom was right there and took a picture. It was a moment I will never forget. 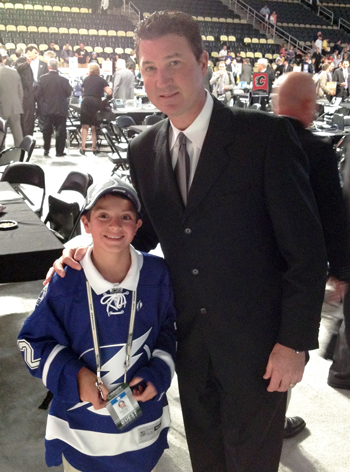 Oh! My! Gosh! It was amazing to meet my favorite Pittsburgh Penguins player in person!

As any good card collector knows, never leave home without your favorite player’s cards because you never know when you might meet them. As luck would have it, I was prepared! 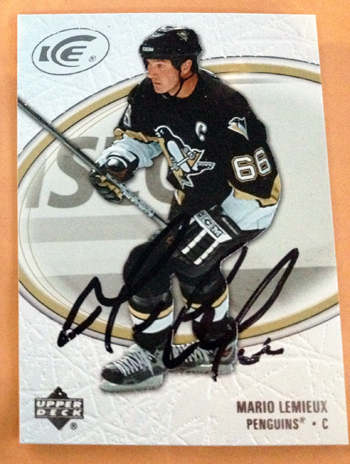 I also met Dan Bylsma, Head Coach of the Pittsburgh Penguins. I informed him I am attending his hockey camp in July. He said, “I’ll be looking for you!” Friday night was one of the most memorable nights of my life. I could not wait to see what Saturday would bring. 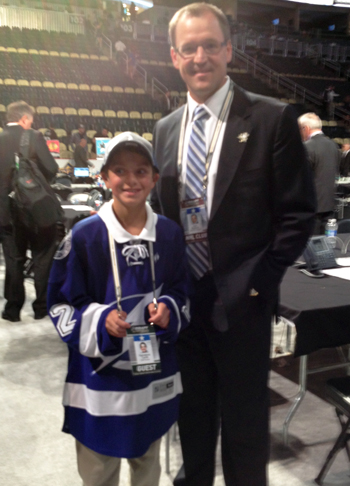 I can't wait to go to Coach Bylsma's hockey camp this summer!

I had to be at the arena 9:00 a.m. I stopped by the Upper Deck booth to check in with Dianne and to tell her about my experiences from the night before. I went to the floor and resumed my duties for Tampa Bay. While walking the floor, I bumped into Billy Guerin who is a retired Pittsburgh Penguin and current Player Development Coach for the Pens. It was another “wow” moment for me. 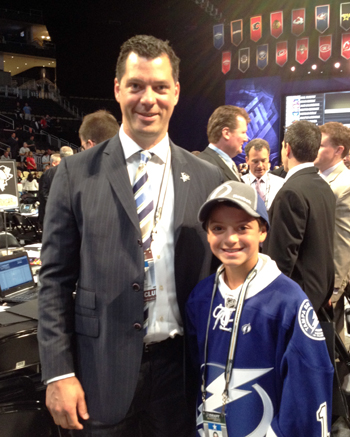 All of their draft-picks came by our table to meet the executives and the coaching staff. I was able to meet them also and they signed my Tampa Bay jersey! Maybe one of them will be the next Vincent Lecavalier!

Thank you mom for entering my in this contest. Thank You Steel City Collectibles for submitting the entry. Thank you Upper Deck for offering me this once in a lifetime experience that I will never forget! Thank you Tampa Bay Lightning for letting me serve as your Draft Runner! And thank you Pittsburgh for hosting an amazing NHL Draft! 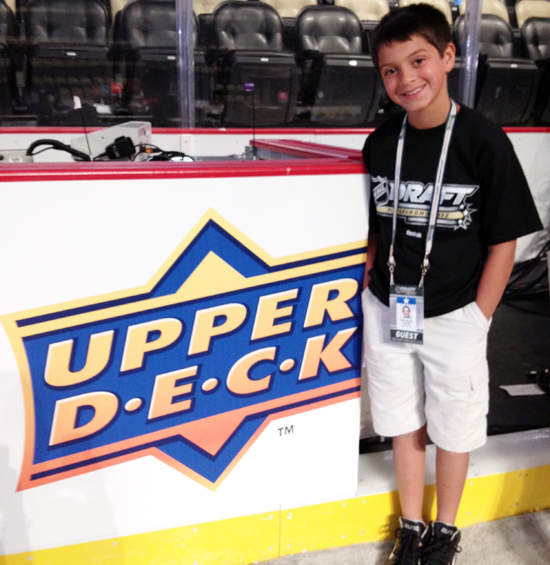 Can I do this again next year?


Wow! Sounds like an awesome time! Congratulations on the amazing experience! 🙂


Sal, What a wonderful experience! It looks like you had the time of your life! I hope to hear more about your experience soon.


Way to go Sal!!! What memories you will have to keep and cherish for the rest of your life!! You will be sharing this with your own children someday! Awesome job!! You deserved it buddy!


Wow what an incredible experience for you. We had no idea how much you experienced. We thought you had just had a few photos taken there the day of the draft. You are one lucky guy. Most guys dream of such an experience…and you lived it!!! Way to go Sal……fantastic article!!


Congratulations to my Sal!!! You are so handsome and I’m so glad you had a great time…


Great Job Sal! You told a wonderful story with your writing, and the pictures are awesome. That was a really cool experience. Go Pens!


Sal – Can’t believe you met Lemieux! You must have been pinching yourself every 5 minutes – awesome!


Sal, congratulations honey. You look like you had a wonderful time and thanks for writing the blog. May all your dreams come true, love, Aunt Catherine


Great job Sal…glad you were able to have such a memorable experience!


Sal I am super jealous you got to meet all those great hockey players. Looks like you had a great experience. Good article buddy!!!


Great job, Sal! Sounds like you took your mom’s excellent advice and enjoyed every moment. Congrats on an amazing opportunity!


Sal, Next time find out if you can bring a friend…I’ll buy lunch.Great job.


Congratulations, Sal! That’s an unbelievable experience that you can cherish for the rest of your life. Thanks for sharing it with your blog/photos, and keep that hockey card collection growing!


Congratulations Sal!!! What an awesome experience for a fantastic hockey guy!!!


Great Job Sal! We saw you on TV! What an awesome experience for you! The blog was great!


What a wonderful experience you had Sal ! All of us at Dr Bupp’s office are sooo very proud of you ! What a thrill for you !!


Congratulations, Salvatore. You surely have received many well deserved blessings. Your guardian angel must be as big a hockey fan as you!


I am so proud of you!!!! Keep up the good work. Your journey in life may be hard and very trying. Stay on this path and you will achieve your dreams. Anything is possible when you have faith and believe in yourself. All My LOVE Grandma Joanne


Hey Sal, looks like you had a great time! We are so happy for you miss you! Remember Sal dreams come true!


Way to go, Sal. Keep up all the hard work on the ice!


Hi Sal
Thank you so much for sharing your experience. Your Queen of Angels Catholic School family is so proud of you! Congratulations!!


Way to go Sal!!! Your Florida family is so very proud of you. Have a great time. Congratulations and we love you.


Congratulations Sal on such an AMAZING Experience! Your Florida cousins are so proud of you!!! We can’t wait to hear ALL the details when we visit with you! Much Love!!!


Wow!!! What an awesome experience you had!! The whole family enjoyed reading about it!


Glad that you picked the Lightning. Go Tampa Bay. So excited for you Sal, you have worked hard for this.

Upper Deck and Defending the Blue Line Partner to Give One Child and Incredible Experience at the 2014 NHL Draft™! | Upper Deck Blog


[…] fans dreams come true by working directly with a NHL® team at the Draft serving as a draft runner. Ultimately these kids end up having the time of their lives by feeling like a part of the team and m…. When that opportunity came up this year, Upper Deck decided to look to Defending the Blue Line and […]