What You’re Missing at the National Sports Collectors Convention

A few weeks ago Upper Deck announced plans for the 2011 National Sports Collectors Convention in Chicago. For fans in attendance, today felt a lot like Christmas as many had been chomping at the bit to finally take part in the various promotions taking place this week at the UD booth. For those who stopped by today, they saw some amazing items on display including some of the 2011 Goodwin Champions Entomology (bug) cards as well as some special high-end inserts from one of our Diamond Club member’s collection. 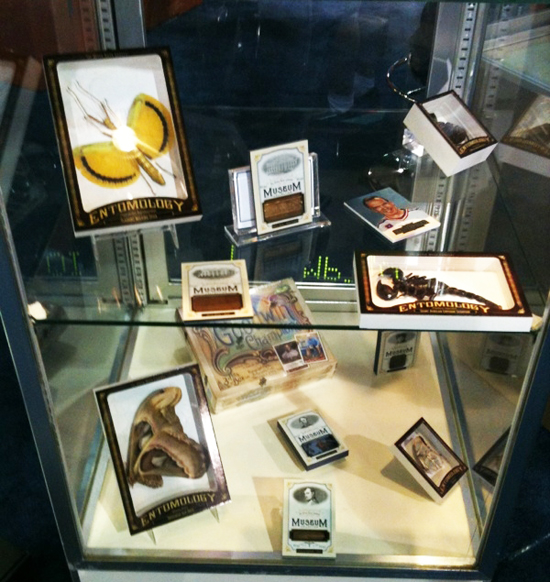 Fans in attendance are able to get the first look at 2011 Goodwin Champions Entomology cards and Museum Collection Relics. Additionally, we are showing off some of the 2011 Parkhurst Champions Masterpieces painted cards. They all look AWESOME! 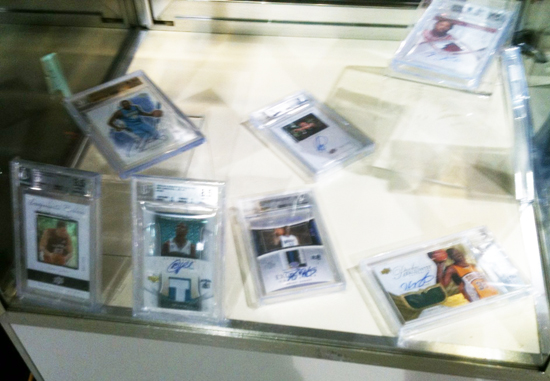 One of our Diamond Club members brought some of his more impressive UD Basketball cards to show off at the booth. 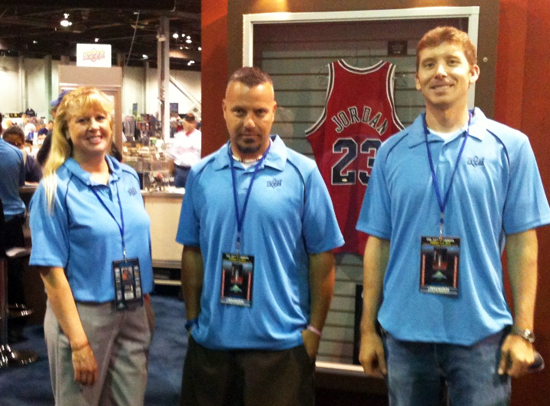 Upper Deck's Dianne Hatley (left), Gregg Kohn (center) and Ben Swiderski (right) are all on-hand at the Upper Deck booth to thank collectors for their support and answer questions.

Additionally this marks one of the first times Upper Deck Authenticated will be selling items on display right at the show. If you do get to make it out to the show, make sure to talk to Lindsay Sherry and ask about some of the show specials! 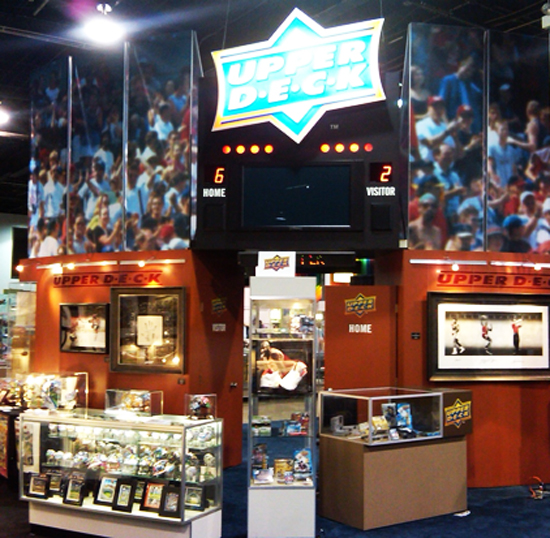 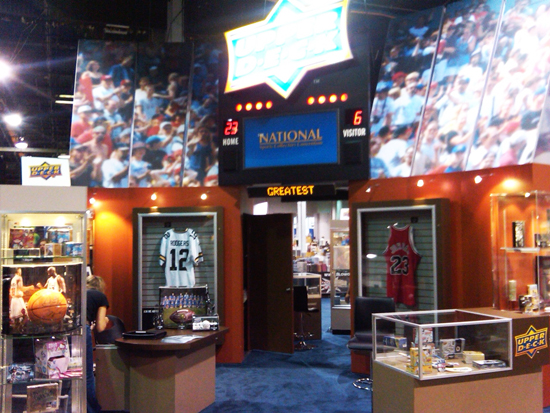 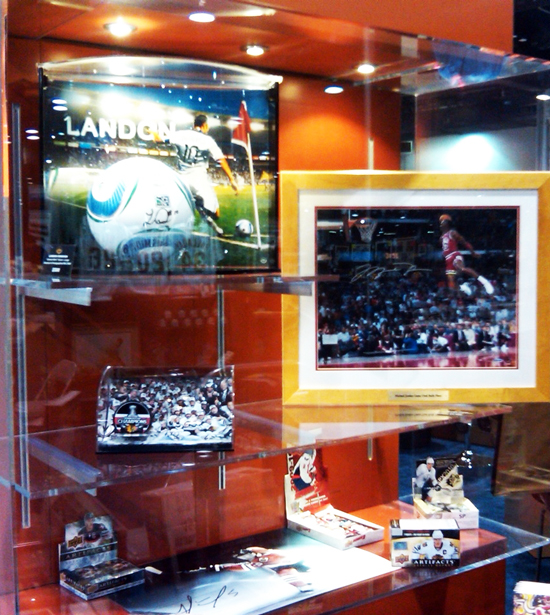 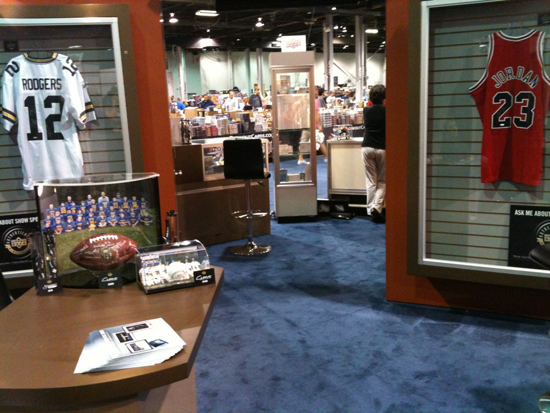 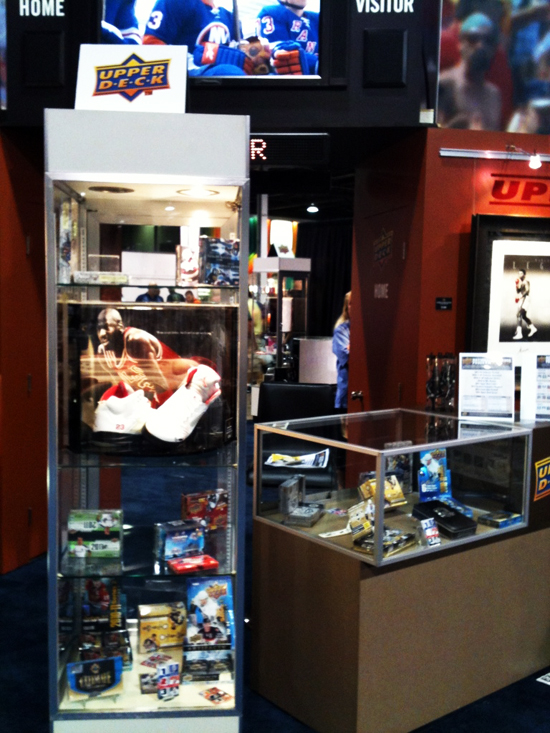 Today fans got in line early to make sure they had a shot to get some of the Upper Deck exclusive National Sports Collector Convention packs. Each day Upper Deck has produced a limited pack with some pretty amazing autographs cards of players like Michael Jordan, Wayne Gretzky, Sidney Crosby, Bubba Watson and many more mixed in. All fans had to do is purchase five packs of newer UD cards from a Certified Diamond Dealer at the show, open them at our booth and they would receive a pack. It has been really fun to see some of the smiles as fans enjoyed this special set and pulled some of the special autograph cards. 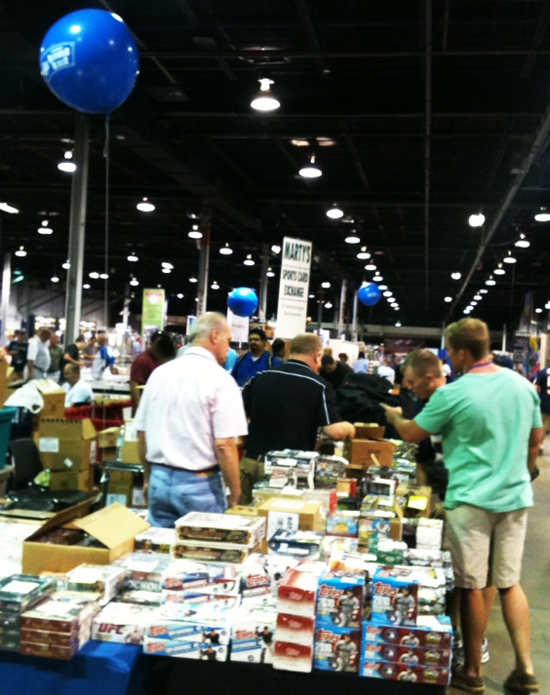 It was easy to find Upper Deck Certified Diamond Dealers at the show because their booths had big blue Upper Deck balloons floating above them. 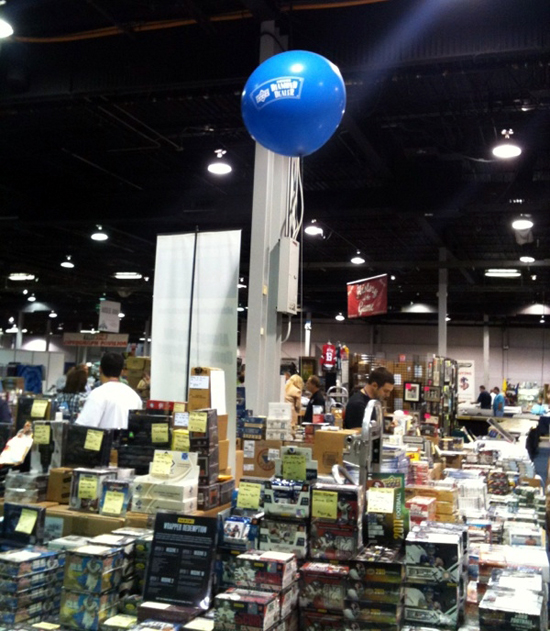 Find a UD balloon, pick up some packs and head back to the UD booth for some fun! 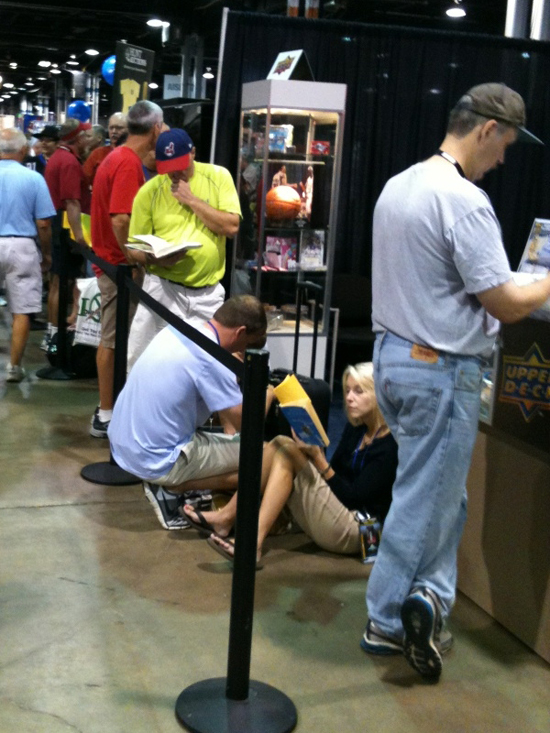 Fans were so excited about the promotion, many got in line early and passed the time in line reading or checking out items at the UD booth. 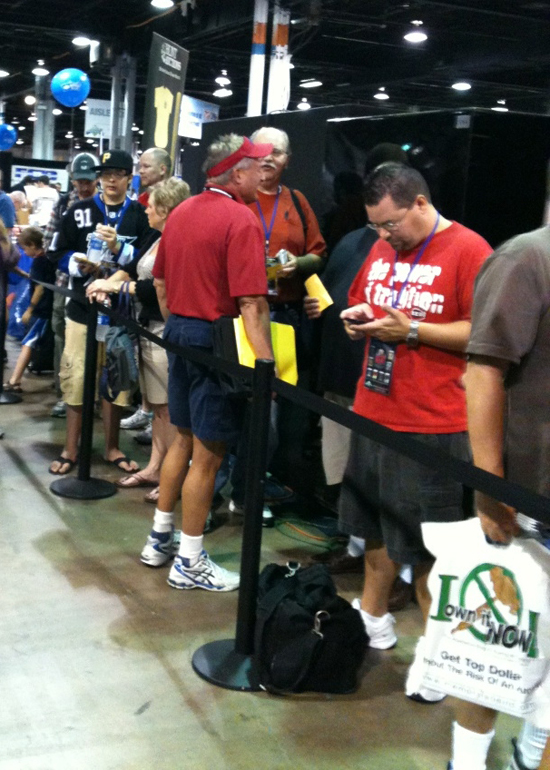 The lines stretched pretty far back, but once we opened they moved quickly. 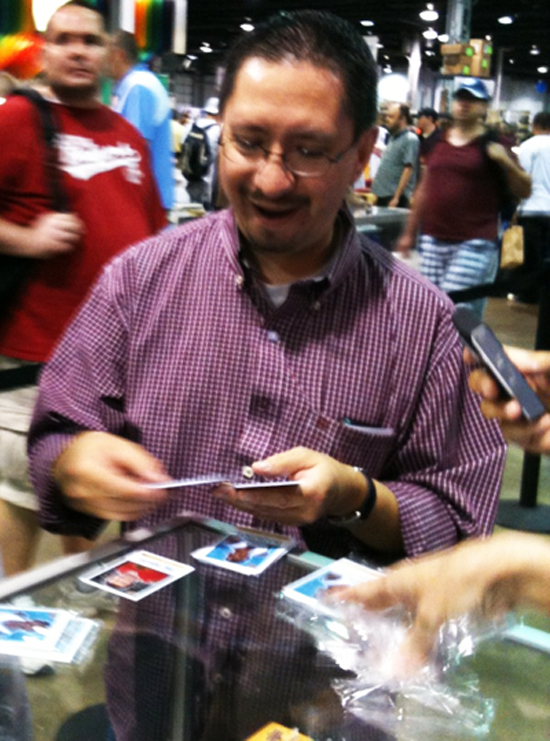 Fans had fun searching through the packs! 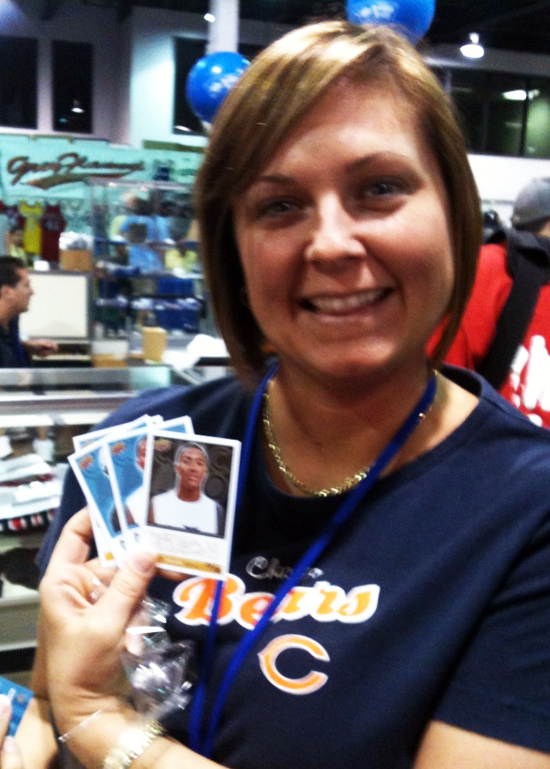 They enjoyed the special cards we produced for the show. 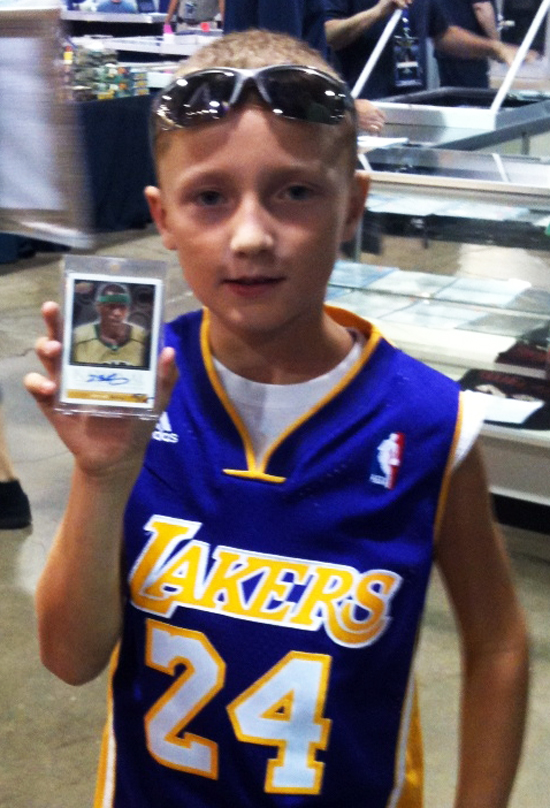 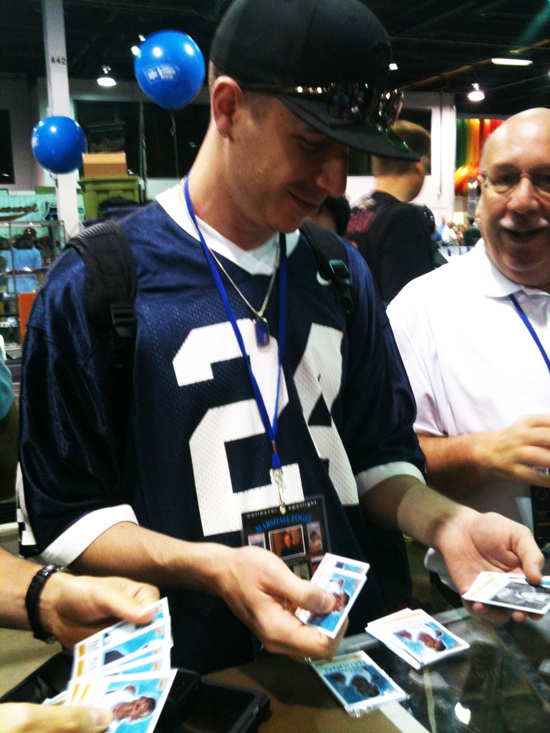 Others joined in on the hunt to find the autographs! 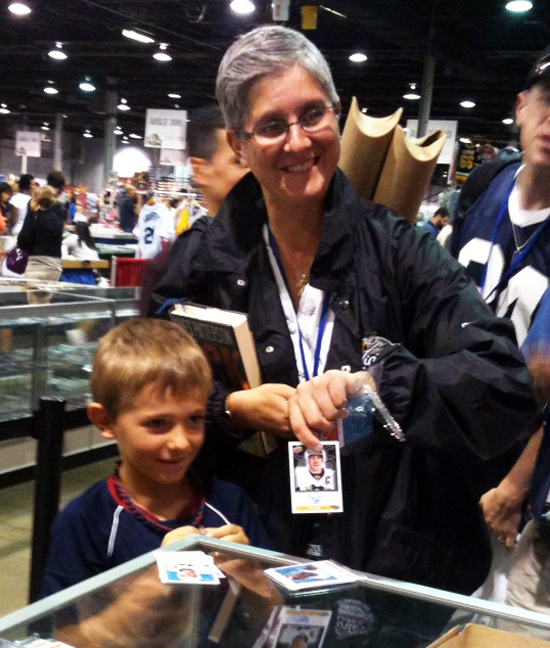 A Crosby autograph is discovered! This collector may look young, but he's been coming to our booth we believe since birth and he has an uncanny ability to pull great autos!

One of the best parts of being at the show is just seeing fans enjoy the experience of opening up new Upper Deck trading cards. We pride ourselves on working to deliver more value than any other trading card company in our products and based on what some collectors where pulling, it’s nice to see we are meeting our objective there. 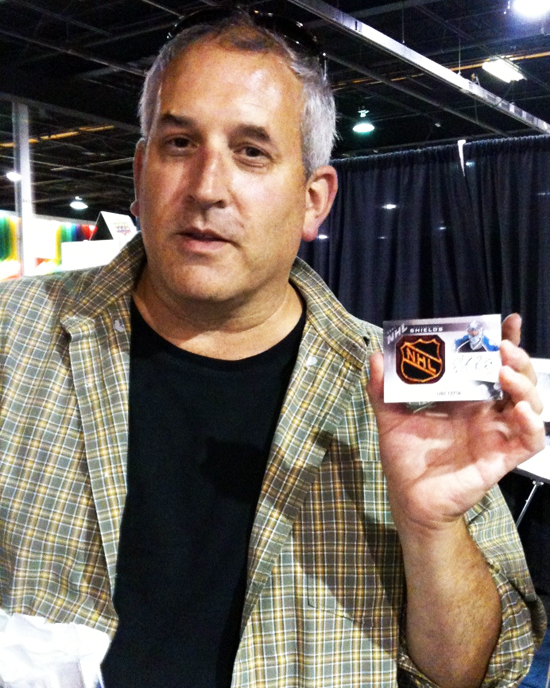 A dual autograph shield card of Patrick Roy from The Cup Hockey? Now that is a great pull! 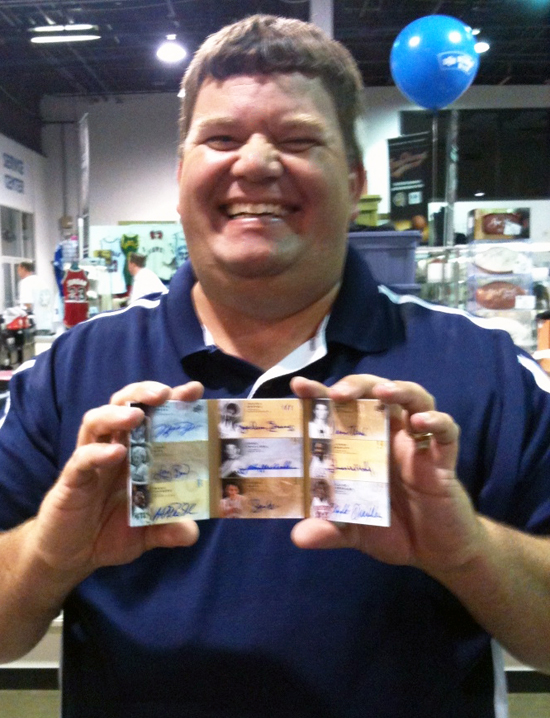 You'd be smiling like this too if you pulled an "All-Time 9" signature card from 2011 All-Time Greats Basketball!

If you haven’t made it out to the National Sports Collectors Convention, don’t worry you still have three more days to check it out. Or you can continue to enjoy images from the show that we post here on the blog and through our other various social media channels. 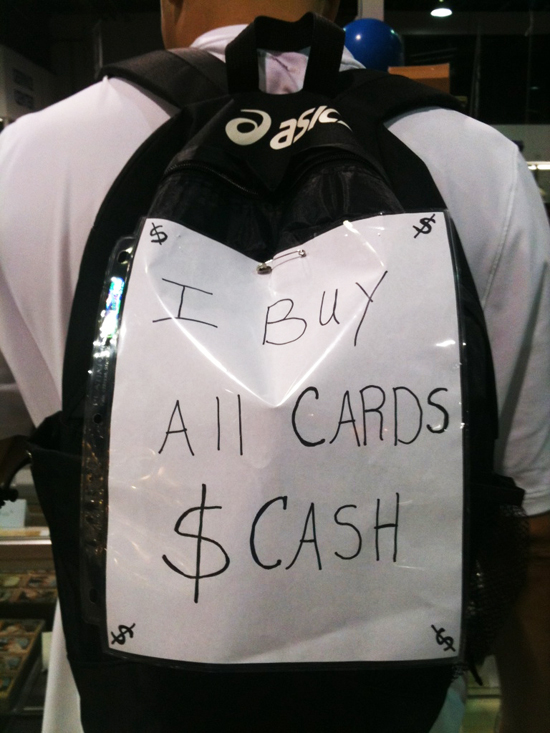 There's still time to enjoy the National so head out there this weekend! Don't miss out!


Wow! Would love to be there. Maybe you could do a promotion to let a Upper Deck fan be a rep for the day at the next convention.