Yesterday the hammer dropped as Upper Deck’s Thor trading cards hit store shelves. What makes this product release unique is that it arrives well before the theatrical release so fans can get a sneak peek at what the movie is all about just by going through the trading card product. And some of the hidden treasures found in Thor packs are going to rock the collecting world. Leaving aside the opportunity to pull an actual piece of Natalie Portman’s movie-worn pants from a pack or autographs from the stars of the film like Chris Hemsworth, today I want to focus on the miniature masterpieces that will be available in this epic release. I’m talking about the original art sketch cards created just for this release. 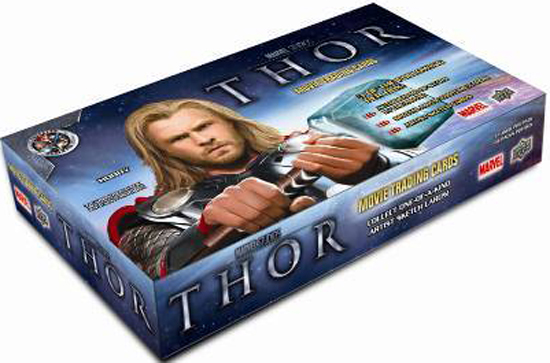 In case you are new to the game, sketch cards are hand-drawn, one-of-a-kind inserts. Each card is unique and will never be duplicated. Some cards fit together to form puzzles, such as the magnificent battle between Thor and Loki drawn by Jose Jaro shown below. All sketch cards are officially approved by Marvel before Upper Deck can include them in packs and it seems like they did a great job of approving the best of the bunch. 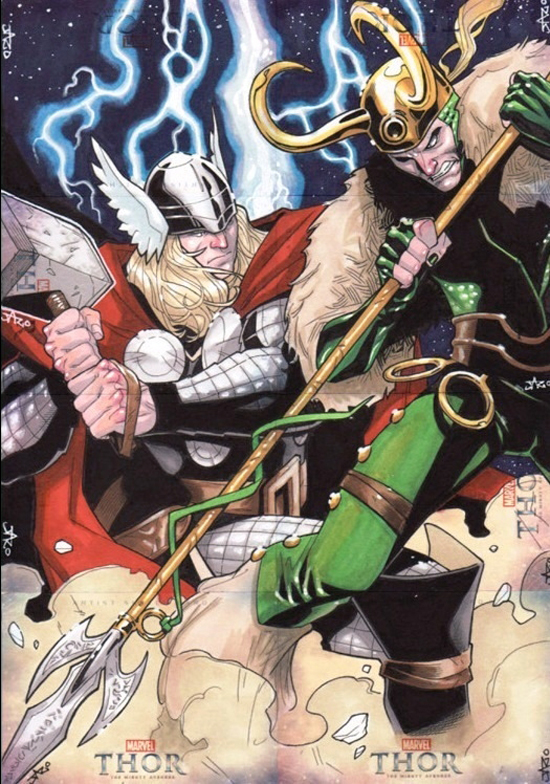 Four cards are used to make up this amazing battle between Thor and Loki. All four cards can be found in one "hot" pack.

Remy “Eisu” Mokhtar is one of the most exciting artists in the field, and he will be adding his talents to the Thor set. These are some of his “Artist’s Proof” cards that are not released in packs, but kept by the artist to show off what they can do. Both vertical and horizontal cards can be found randomly tucked inside the foil packs. This allows a fresh new take on the composition of the original interpretations from comic books.

The "AP" designation on these cards indicate they are "Artist's Proof" cards and will remain with the illustrator.

Wendy Chew is a newer illustrator on the scene and her sketch cards will be eagerly chased. She has a perky, whimsical take on the timeless legend of Thor which will undoubtedly breathe new life into the story. Her cards are sure to bring a wide grin to the face of the lucky collectors that find her creations. 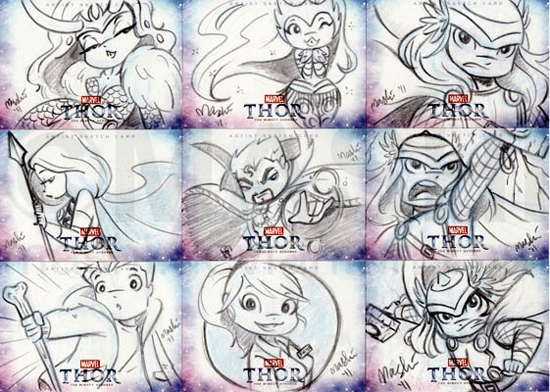 Artists like Wendy Chew have a more playful take on sketch cards in the Thor set.

George “Geo” Davis draws tiki funk masterpieces in a special saucy style that is both instantly recognizable and really fun to collect. Transferring his unique brand of boldness to the hammer-pounding saga of Thor creates a thrilling combination of modern and ancient flavor that is sure to please a global community currently drooling with anticipation. 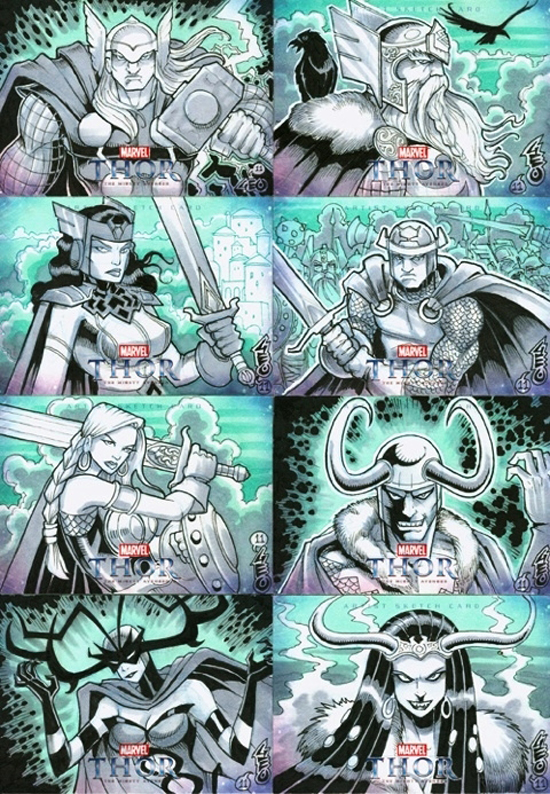 Sketch cards from artists like George Davis help link movie fans back to the comic.

I wanted to end today’s preview gallery with one of the loudest screams in the sketch card world. Jonboy Meyers is back with a roar. The Thor set contains the original pencil sketches of this unabashed master of mayhem, and the foil wrappers can barely contain them. I hope the lucky collector who opens a Jonboy sketch card is sitting down because those things can knock you flat on your back. 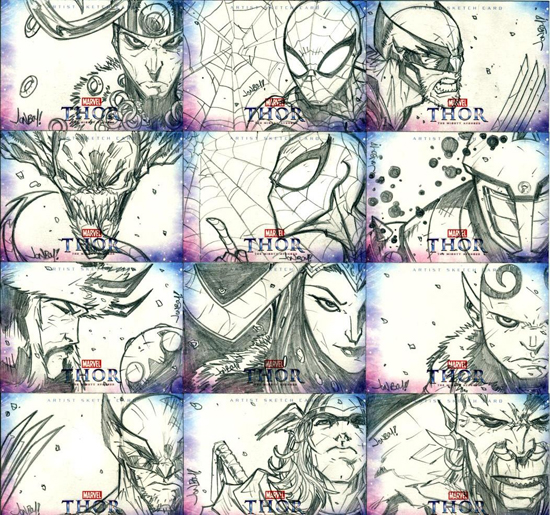 This is just a sample of the original art sketch cards available in Upper Deck’s Thor trading card set. Get out there and slam your own hammer on a box or two. You might find a museum-quality masterpiece and capture a one-of-a-kind lightning strike of collecting glory.

Rian Fike is a teacher, writer and an expert on comic sketch cards from Miami, Florida. He runs a sports and entertainment blog called Full. Body. Transplant. as well as a blog where he features the work of sketch card artists called The Sketch Card Saloon.