My Oh My: Dave Niehaus Will Be Missed

Certain dates resonate with me. July 5, 2002, is one. That was the day Ted Williams died. August 13, 1995, is another. That was the day Mickey Mantle succumbed to a severely damaged liver. And now November 10, 2010, will live on in infamy as well. That’s because yesterday was the day Dave Niehaus, the longtime voice of the Seattle Mariners, died. He was 75. 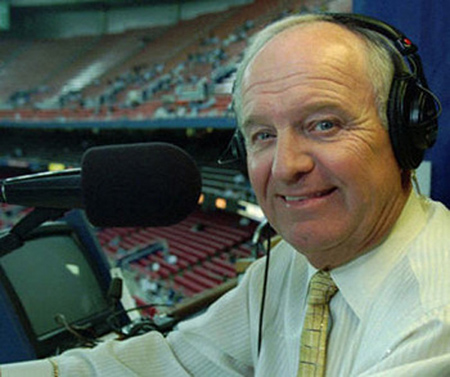 The Voice: Dave Niehaus began his Seattle career broadcasting Mariners' games inside the old Kingdome in 1977.

As a freelance sportswriter living in Seattle from 1995 through 1997, I authored several different articles and player profiles for Mariners Magazine, courtesy of former M’s Communications Director Dave Aust. He gave me plenty of assignments each season, starting with a cover story on Randy Johnson (“King of the Hill”) in July of ‘95. It was about two months before the Mariners really caught fire that season and went on to earn their first AL West Division title. A thrilling, one-game tie-breaker over the then-California Angels sealed the deal. But on that mid-July day, as I entered into the bowels of the old Kingdome and made my way toward the Mariners clubhouse, my heart was racing. With my  newly acquired media pass I made a quick left and walked straight into the Mariners locker room, right past Junior Griffey’s locker, complete with his oversized leather chair parked in front with a Nintendo setup beside it.

It was a good two-and-a-half hours before game time, so the atmosphere was loose. I quickly recognized the tallest guy in the room (Johnson, at 6’ 10”), introduced myself and sat down on the other end of a leather couch upon which he was parked. A newbie to the whole setup, I didn’t realize that that couch was reserved for the players, so I just went about my business. As I recall, a couple of guys did pass by and give me that “What the hell are you doing here?“ look, but I was too engrossed in my conversation with Johnson to give it much thought. He was candid and two days away from his next scheduled start, so the interview went well. I got plenty of great quotes for my article.

I left and went straight home to my apartment in Lower Queen Anne to start writing. An hour later, I turned on the M’s game and was listening to Niehaus call the action alongside Rick Rizzs. A longtime Red Sox fan, I quickly became an M’s fan that season anytime the Sox weren’t playing, and I can honestly say I owe part of that experience to Niehaus. His warm, raspy, grandfatherly voice welcomed in listeners and made them feel at home. He was able to cover the on-field action, but also share insight and anecdotes that only an insider could. His enthusiasm for the game and his team jumped off the screen. His famous “Grand Salami” calls for Mariner grand slams and his “My Oh My” phrase for pivotal moments made listeners feel good just hearing his voice.

I watched and listened to Niehaus for the next two seasons when Aust called yet again and told me he needed a story for Seattle’s 20th Anniversary celebration coverage. He wanted me to interview Niehaus and collect his thoughts on each of the first 20 Mariners who had been selected to play in the All-Star Game, starting with outfielder Ruppert Jones in 1977 and ending with Alex Rodriguez, Dan Wilson and Jay Buhner in 1996.

So, on April 23, 1997, I went back down to Pioneer Square, where the Kingdome resided, and walked through the security gate to collect my press credential. I made my way all the way down to the field where Niehaus was hanging out, chatting with the players. I watched batting practice for a few minutes and when I saw an opening, I walked over to Dave and introduced myself. He was expecting me and shook my hand. He led me over to an enclosed, private box right behind home plate where it was quiet but where we could still watch batting practice.

I turned on my tape recorder and started rattling off names for him and he did the rest. Without any paperwork in front of him, he spouted off vivid memories and stats on each of the 20 players like he had just watched them play yesterday.

He had personal nuggets to share for every player.

Craig Reynolds (shortstop, 1978): “A classy, classy man. Today I think he’s in the ministry. We didn’t have Craig for very long. He went to the Houston Astros and was their shortstop for many years. But I remember him as one of the classiest individuals – one of the nicest men ever – in Mariners’ history.”

Floyd Bannister (pitcher, 1982): “A local product, Floyd was the opening night pitcher against the Minnesota Twins in 1982 when they opened up the Metrodome and he beat the Twins. He was kind of a quite kid and he led the league in strikeouts [209] that year. But he was a real good pitcher who ended up with the Chicago White Sox.”

Mark Langston (pitcher, 1987): “Mark was a quality guy. He and Mike Moore were the first power pitchers this organization produced. He would have problems, but I don’t mean this in a derogatory way. He would get a lot of strikeouts, throw a lot of pitches, and I think that’s one of the reasons Mark had problems going real, real deep into baseball games. But today, with the way they use the bullpen, that’s no big thing.”

Ken Griffey Jr. (centerfielder, 1990-96): “The franchise began in 1989 when Junior got here. That’s when everybody began to take notice of this team. I could see it when I saw him in spring training in 1988. You know, in 1989, he hit almost .400 in spring training, so there was no way they were gonna keep him out of the lineup. I’ve often said, to anybody interviewing me – and Junior’s 27 years old as we speak – that Ken Griffey Jr. can be, if he stays healthy and wants to be, the greatest player who ever lived.”

Tino Martinez (first baseman, 1995): “Of all the players we lost to trades, that one hurt. That one hurt me. As I say, I don’t get too close to ballplayers, but I was a little bit close to Tino. I liked the way he carried himself. I liked the way he went about his work. He never made excuses for anything. I was praying for Tino last year, his first with the New York Yankees. He got off to that horrible start and, of course, there he was trying to replace Don Mattingly. But he did something in his first year with the Yankees that Mattingly didn’t do in 13, and that’s win a World Series. I couldn’t have been happier for Tino.”

Jay Buhner (outfielder, 1996): “Jay’s an old-fashioned, died-in-the-wool, hard-talking, get-your-uniform-dirty, doesn’t-give-a-damn-what-he-says type of a ballplayer, and he’s a great right fielder. Of all the things he’s done – and he’s hit 40 or more home runs in each of the past two seasons – what he’s probably proudest of is the Gold Glove he won last year. Jay Buhner is a just a down-home, good old guy.”

And so was Niehaus. For 34 seasons, starting with the team’s inaugural in 1977, Niehaus narrated the action. He called 5,284 of the Mariners’ 5,385 games through the end of last season. There was nobody else quite like him. Dave Niehaus will be missed. 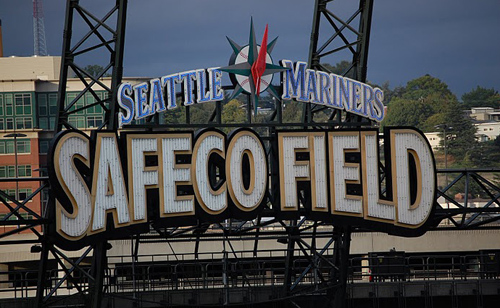 New Digs: Niehaus ended his career at Safeco Field, which opened up in 1999.