This is Part 2 of a two-part series written by Upper Deck intern Ryan King. Part 1 appeared yesterday (July 19) on the Upper Deck Blog. All photos are courtesy of Ryan King.

While in Najayo, we visited a community center that the Padres are involved with. While there we helped clean up the yard, played ball, danced, finger-painted, and basically just hung out with the kids. We gave the kids a bunch of gifts that we brought with us including Upper Deck trading cards. Before we left we asked the program director what it is that they wanted. Responses ranged from a new roof, to painting the bathroom a certain color, to rules that banded fighting between the kids. Our class will work with the Padres to see what we can do for that community center in the future. 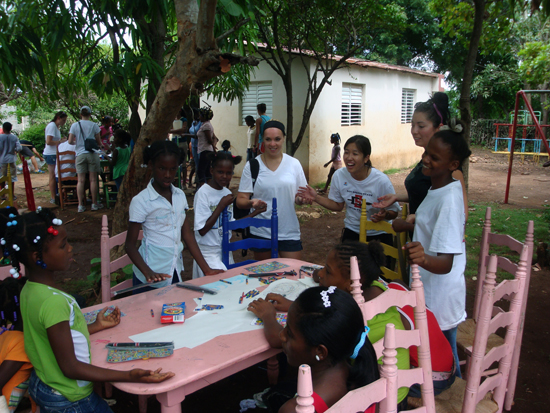 Simple activities like dancing, finger painting and just hanging out were big hits with the kids.

This experience gave us a different perspective as we actually got to spend time playing with the kids and seeing how they lived just a few minutes away from the Padres paradise. Because we only had one van that day to transport our class, some of the local boys showed us how to get back to the facility through the woods. Without them there would have been no way that we made it back to the facility without getting lost. As our way of saying thanks, we gave them each some extra gifts for their help. 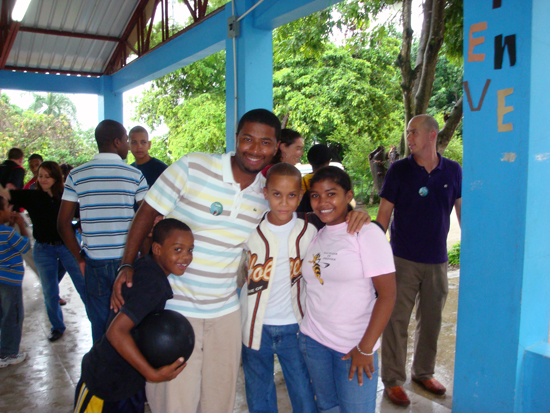 Finding new friends throughout his nine-day journey was easy for the author.

The following day we visited the Cigar Family, which is a school that used to be in a neighborhood worse than what we saw in Najayo. We visited the Cigar Family to see a model of what can happen when local businesses, community, MLB, and others come together to create a modern school that teaches students to be trilingual and offers them the opportunity to sign, dance, paint, play basketball and baseball, and do karate. We had first graders sing to us; older students talk to us in French; heard some students’ entrepreneurship ideas; and even had students perform karate moves and dance routines for us. The school placed 27 of its first 28 students graduating class in college. We also learned that the school tries to incorporate the students’ parents as much as possible as to not create a social divide that is inevitable when children become more educated then their parents. The next goal is for the community to find a way to retain its educated students rather than letting them move to the city to find work. Other schools such as the Cigar Family are in the works. After leaving the school we visited a couple local entrepreneurs to see how they were making a living and helping the community at the same time.

The next day the class visited different organizations such as USAID, American Chamber of Commerce of the Dominican Republic, and the Dominican Development Alliance to hear what each of them do and how Major League Baseball makes an impact.  We then heard from two former MLB interns who are now working on projects in the Dominican mostly in the investigation department. After these meetings the class divided in two and went to Pedro Martinez’s wife’s community center to learn about a microfinance program for single mothers. I went along to meet Pedro’s wife and learn what goes on at her center. Her center has benefited from funds from the Dominican Development Alliance. The center has already outgrown its space as more families hear about it and want their kids to join the community center. Summer camp was currently taking place where computer classes, cooking classes, cosmetology classes, and games take place. Due to rain most of the baseball games had been postponed, so we ended up playing basketball and a game of volleyball with the students instead. Mrs. Martinez was very interested in what we were doing and wished more college students from the states would come down and volunteer at her center and others. 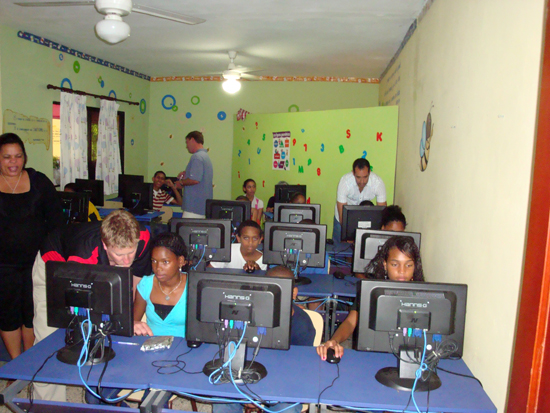 Just like baseball, education is also vital to finding a better way of life in the D.R.

A day later, we visited the main branch of Banco BHD, the official bank of MLB in the Dominican Republic, to understand the partnership between the bank and baseball. This new branch had a decent-sized baseball museum inside of it, which was pretty cool. It had a baseball card of every Dominican player that made the league. We heard horror stories of teams signing players and then the player’s money disappearing either from a family member’s involvement, an independent trainer, or just bad investments. Major League Baseball wanted to stop this and have one process where all signing bonuses were directly deposited into the bank and some kind of financial training was given rather than giving these kids a bag of cash which is what used to take place. Currently all players must come to the bank with a parent or guardian and learn about good financial management. They stress to the player that it is their money and they can do whatever they want with it, but that they should try and save as much as possible. Currently 28 of the 30 major league teams use the bank for their Dominican operations. Teams and players are given special rates, as this is a joint venture between the bank and MLB.  Our visit to the bank even made it into the local newspaper. 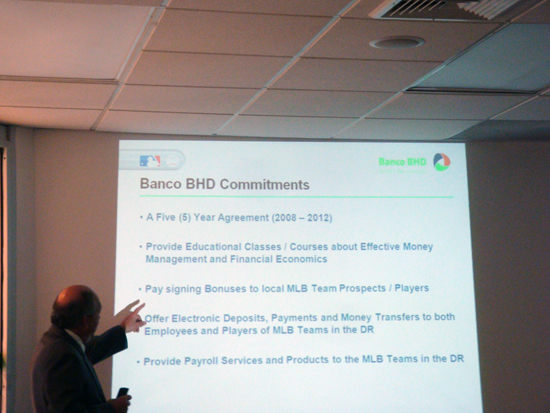 Teaching the players how to handle their finances is of utmost importance in the D.R.

After leaving the bank we visited a model independent training facility called “La Academia.” This facility was like a mini major league facility. The players lived in a dorm and played baseball. The facility currently has three of the top five prospects for the next signing period. Not only are the players competing on quality fields, but they also are being fed and trained the right way. And they are taking basic English lesson to prepare them for the next level. The facility does not offer full schooling yet but it’s in the plans to make it a baseball school where they learn in the classroom as well as out on the field.

The players pay nothing to live at the facility, but like any independent trainer the facility takes 25% percent of the players signing bonus. The percentage of signing bonuses collected each year helps keep the operation running. After leaving the independent training facility our class again split up and visited the New York Mets and Pittsburgh Pirates training facilities. I went to the new Pirates facility where four things stood out to me: 1.) The branding of the Pittsburgh Pirates ‘P’ all over the complex; 2.) the pictures and memorabilia of Pirates greats, especially Roberto Clemente; 3.) the importance of education the Pirates place on their players; and 4.) the community service requirements the team mandates from  its players. After leaving the facility we visited the local school where the Pirates do most of their community service. The Pirates built a wall around the school for safety and have donated computers and other items as well. 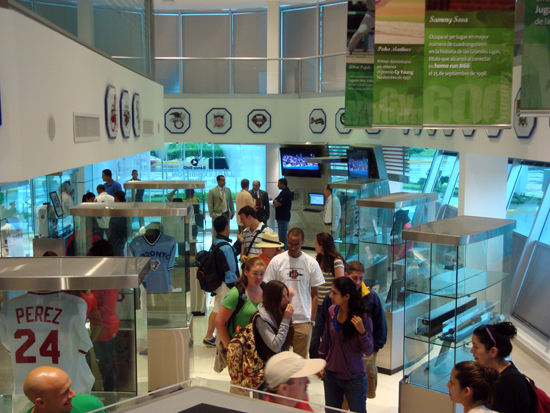 Dominican players who make it to the major leagues are revered in their homeland.

On our final full day in the Dominican we headed back to the MLB offices to debrief with Sandy Alderson and other baseball officials about what we had seen and what the next steps should be to overcome the issues facing MLB in the country. Some of the topics we discussed included how to regulate the clubs; how to certify the independent trainers; what happens to the players who don’t make it; how to adjust the cultural mindset that baseball is the only way to make it; and how do you improve the education of the players. As a class we threw out some ideas on ways to improve these issues. Alderson then told us what he was looking for, which is a pre- (before players are signed to work with independent trainers), current (players in the academies), post- (players who didn’t make it), and non-player (education of boys and girls) plan that is sustainable for years to come. The goal for our class is to go back to the U.S. and come up with a comprehensive outline that we can present to MLB in the near future.

After a great meeting we were free to check out the city for the rest of our day. We had a farewell dinner that was attended by members of MLB and other leaders we had met during the trip. Following dinner, our entire class went out for a classmate’s birthday before heading back to San Diego the next morning. The trip totaled nine action-packed days in the Dominican Republic. 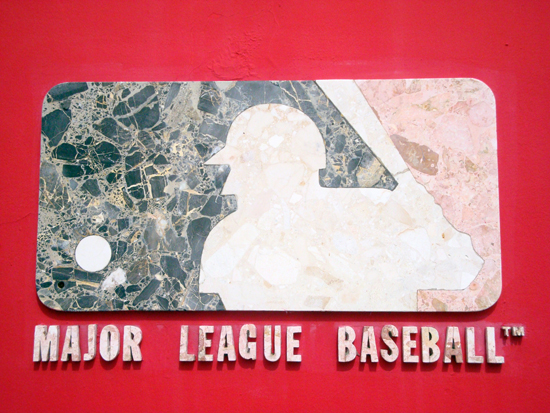