Baseball: A Way of Life in the D.R.

This is Part 1 of a two-part series written by Upper Deck intern Ryan King. Part 2 will appear tomorrow on the Upper Deck Blog. All photos are courtesy of Ryan King.

On June 17, the Sports MBA program from San Diego State University departed for the Dominican Republic as part of its International Human Resource class. The goal of the class was to learn about recruiting, developing and retaining international talent through baseball in the Dominican. The trip was also to help Major League Baseball and specifically the San Diego Padres brain trust in developing sustainable social economic community outreach programs. In order for our class to be able to make recommendations to the Padres and Major League Baseball, we were exposed to many different elements that affect baseball and the citizens of the country. 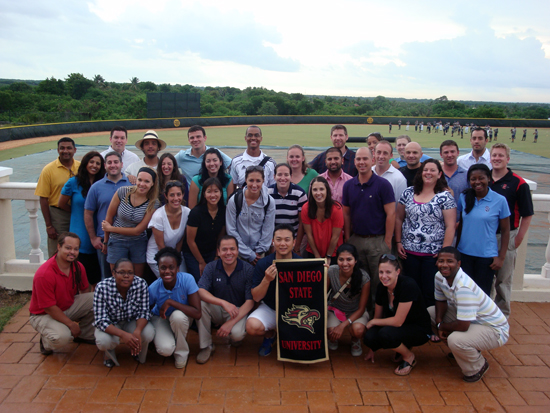 The author, bottom right, and his classmates arrived in the D.R. on a mission.

After taking a tour of the Santo Domingo historic downtown area we got down to business with a meeting at the Major League Baseball office in the Dominican. We had the opportunity to hear from all the departments in the office and learn about what they do on a daily basis. We were lucky enough to hear from Sandy Alderson, the former vice president of baseball operations and executive with the San Diego Padres and Oakland Athletics who was appointed by Commissioner Bud Selig to clean up baseball in the Dominican as a consultant to MLB. We learned that baseball in the Dominican represents a $100 million yearly business and that the four biggest challenges the office faces are substance abuse, identity fraud, education, and numerous independent trainers.

Because the Dominican Republic is such a poor island many families see baseball as the only way for their sons to make it. Due to this belief, independent trainers work with young ballplayers to try and get them ready for the day they are eligible to be signed at 16 and a half. Because there is such a premium placed on age some of the trainers give their players performing enhancing drugs (PEDs) to give them an advantage on the field. Sometimes the players have no idea that this is even taking place while other times the player is well aware of what they are doing. Likewise, older players are trying to lower their age in order to be looked at as a better prospect and receive more money when they sign. Since 16 is such an important age to these players, many of them drop out of school to pursue their dream. The educational system is not very good in the D.R. and these boys are dropping out anywhere from the 5th to 8th grades. 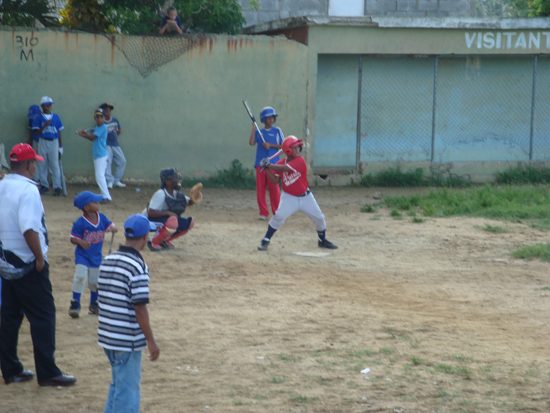 Field conditions for youngsters playing baseball in the Dominican are less-than-desirable.

After hearing about all the issues that face the Dominican Republic and Major League Baseball we went to a barrio and watched as little league teams played baseball on a field that never would be used in the U.S. The field was overgrown, uneven, unkempt, and second base was a piece of cardboard.  The children all had different color uniforms and some of their equipment and shoes were falling apart.  In the outfield was a pickup game of baseball using a rag softball and a few teenagers hitting a plastic cap with a broomstick. There was one shoeless 16-year-old who was fielding grounders and had a cannon for an arm. He was developed to the point where some of my classmates wondered if he was on PEDs as he had veins coming out of his muscles. My classmates and I joined the pickup game in the outfield. The children seemed to get a kick out of us playing with them. I did not have any luck at the plate as I struck out twice. I talked to one of the older boys named Felipe who was 17 and spoke little English and he told me he played at the park every day. After watching these kids play for almost two hours, you could tell how much more baseball meant to them and the pride they took in playing it. We learned that 10 major league players including Willy Mo Pena grew up playing on this exact same field and that none of them had done anything to fix it after reaching the big leagues.

The next day we traveled to the Padres training facility in Najayo to watch a summer league game between the Padres and the Orioles. The difference between the field in the barrio and this one was night and day. The kids I met the day before all dreamed of being signed and one day playing on this field that had the same dimensions as Petco Park. The players in this summer league battle were between 17 and 20 years old and had been signed to contracts ranging from $10,000 to more than $1 million. The Padres prevailed 7-4 this day following a home run by one of their rising stars in the system. We learned that only four or five of the players on these Dominican summer league teams usually makes it to the states to play in the minor leagues with the chance to make the majors. After the game we took a tour of the best baseball facility in the Dominican. The Padres spent $9 million to build their beautiful state-of-the-art complex. The players have access to top-notch fields, batting cages, locker rooms, dorm rooms, medical and weight rooms, and classrooms. The players live at the facility 10 months out of the year but only receive payment on top of their signing bonuses during the three-month season. Along with practicing baseball, the players take English classes and cultural immersion courses to prepare them for the United States. 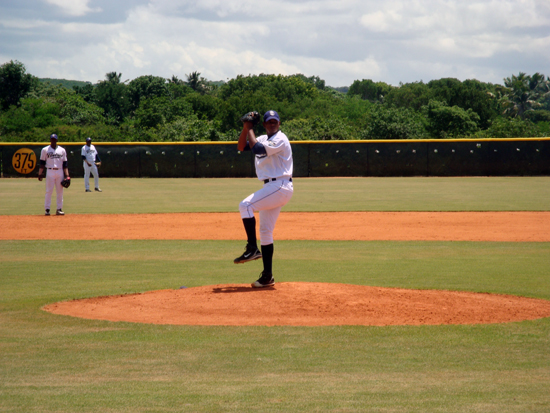 To graduate to summer league games is yet another step toward possible big league dreams for up-and-coming players in the Dominican Republic.

One night, I was talking to the catcher from the game we watched and asked him questions about his recruitment and baseball development. He was an 18-year-old from Venezuela who was enjoying his second season with the team. I asked him where he learned to speak such good English and he told me he played in a tournament in Vero Beach, Florida, when he met former major league catcher Michael Difelice who asked him if he wanted to improve his catching skills. If so, he would allow him to live with him and that’s where he learned English and improved his skills defensively. He said he stopped going to school after the 9th grade to concentrate on baseball. He said that he did not work with an independent trainer, but rather it was his father who helped him get signed. He had four offers, but decided to take less money to sign with the Padres because of the Padres Dominican facility. He told me that they play six games a week and that he rotates with two other catchers. He also mentioned that he was not having that great of a season with the bat, but declined to share what his batting average was. The last thing that we talked about was the competition between the different teams. He mentioned that some of the organizations play to win, while others focus on training and developing their players. He stated that the Padres focus on training and development.