Oh, to be a Mets fan in September. I fully expected we’d be at least playing for a Wild Card spot when this month came around, but that ship sailed a long time ago. I’m still a baseball fan though, and I need something to cheer for. Something to look forward to.

I want a Yankees vs. Giants World Series.

Sure, Red Sox vs. Dodgers would feature Manny coming back to Boston, and I’m sure Fox executives would be just as happy with the Dodgers and Joe Torre facing off against the Yankees. The Phillies could very well go for a repeat after adding ace Cliff Lee, and the Cardinals could feature the best player in the game on the biggest stage yet again. The Angels have their usual aggressive approach and solid pitching, but have added an element of patient hitting to their lineup this year. And of course, the Red Sox would have a chance to win their third championship this early in the century, after suffering a great deal in the past one.

But for my money, nothing would be more exciting than Giants and Yankees. I mean, look at this freakin’ lineup. I don’t have much affection for the Yankees, but you have to stand in awe of how their usual great offense combines with the new home run happy stadium to create a Very Scary Place for opposing pitchers. Eight of the nine guys in the lineup will easily have 20 home runs by the time the season is over, with a few hitting 30, and Teixeira may very well get to 40. And it’s not all home runs of course, as every guy with a bat in his hands seems to have an OPS in the mid-to-high .800’s, if not .900’s.

Classic Bronx Bombers with a stadium that plays small, causing bombs to go out left and (especially) right . . .  where the old short porch has become even more of a joke for round trippers. Opposing pitchers tremble at the sight of it: the lineup gives you no reprieve, and the stadium itself is against you. Who will save us?

How about this kid? 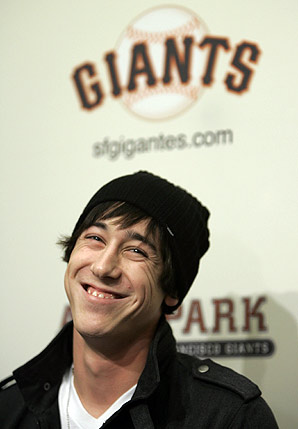 He’s 5′ 11″, 160 pounds, and just turned 25. He also has a Cy Young on his mantle, is well on his way to getting another, and is the envy of fans of the other 29 teams in the league (especially his hometown Mariners, who passed on the opportunity to draft him). With his funky delivery, he’s proven to be consistent, durable, and productive.

He is the perfect David to take down the Goliath in the Bronx.

Now granted, Lincecum can’t start every game in a long series, which is why it’s good to see the Giants have another young ace up their sleeve. 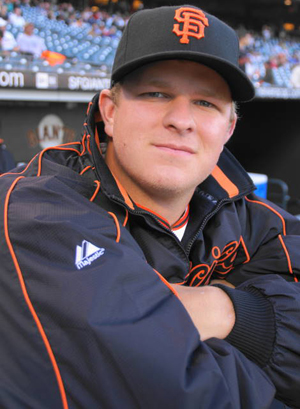 Matt Cain is 24, and having the best year of his career so far with a 2.50 ERA. He doesn’t get nearly enough credit because he pitches by the bay with Lincecum getting the marquee recognition; but if you put Cain in Boston, New York or Chicago, he’d be an ace and probably a household name. Not to say he can’t get there with the “SF” on his cap either.

So assuming everyone stays healthy, we can expect the Yankees postseason lineup to look something like this:

Holy crap. Who can conquer that four times in seven games? The kids can, I hope.

And even if they can’t, it’ll be remarkably entertaining. By contrast, the Giants lineup is all kinds of awful, and they’ll need to scratch and claw for every run they can get. But when you have Lincecum and Cain going four games out of seven, you definitely have a chance. And how would these kids do against the Yankees anyway: against the toughest lineup in the league, in a high pressure situation, with a stadium that provides no room for error?

That would be something to watch. It’s not even a sure thing the Giants make the playoffs this year, but I’ll be hoping they can win the tight Wild Card battle and make this happen. No matter who wins, fans would get to see a series that could easily be the most entertaining World Series of this decade.


Yankees SUCK, Lincecum rules. He reminds me a great deal of Fidrych, with much more staying power.

Drop the Bad Guys, I don’t care how many people would want to see them. Just as many celebrate every year when they are eliminated. Maybe more.