My wife and I attended the three-day Kaaboo festival in Del Mar, California recently. There was great live music to enjoy, but there was also incredible food, art and people watching to take in as well. When we were strolling through the artist area, my wife stopped me because she saw an artist was incorporating baseball cards into his work. She knows I geek out over this stuff so we went to check it out.

There I met Lucien Shapiro who is a sculptor and artist. For Kaaboo he put together a performance art installation called “The Giving Tree of Dreams” where he invites guests to visit with him and share a wish they have. Then he would have them write it down, have the guest say their wish aloud three times and encourage them to do it every day. To remind them to do so, at that point, Lucien shares with them one of his baseball cards from his childhood. The cards are a gift from him and an interesting way to share the hobby with everyday people. 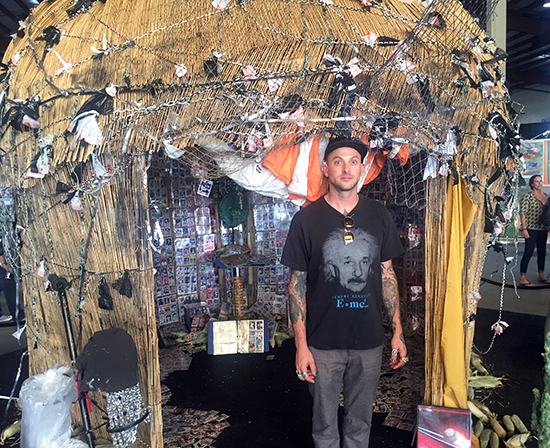 Lucien Shapiro stands in front of his installation for Kaaboo. 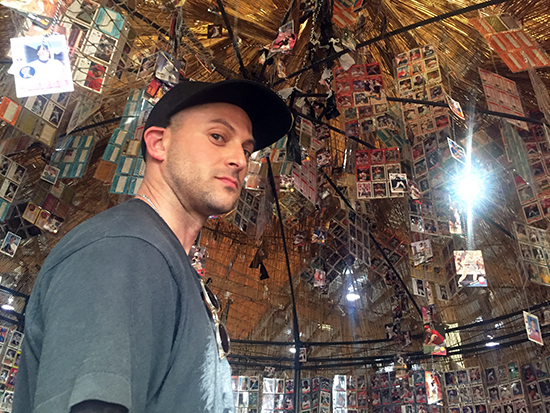 Lucien had baseball cards hanging from the ceiling which was pretty darn cool. Great idea for a man cave!

Here’s what it looks like when you walk in Lucien’s exhibit. 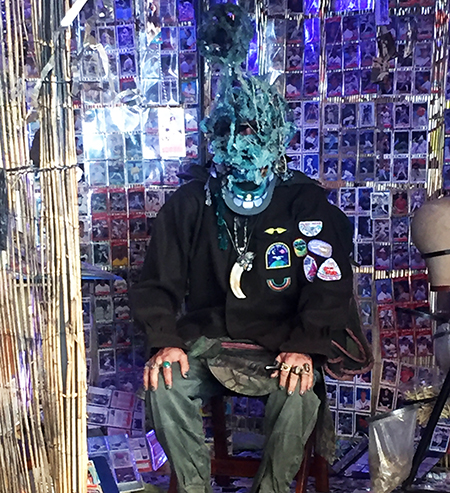 Lucien creates incredible masks and wears them during the performance. It’s a little intimidating to walk in there, but he was very kind to us.

Shapiro believes that people are strong enough to manifest their own wishes. He says that this project will continue until every last baseball card from his childhood has been distributed to others in exchange from a promise from those receiving the cards to manifest their wishes. I asked if this was a mandate from his mom and he said that it was not. Still, she’s got to be pleased to have them out of the house.

Oh, and did I mention he wears an incredible mask and has a masked friend drumming on stage with him? Here’s how it looks when you visit with Lucien during his show.

One thing I love about trading cards is how so many people engage with the products in so many different ways. Artists in particular are so creative with cards. I love what Tim Carroll in particular does. Good luck to Lucien with his quest and I’ll look at the card he gave me every day, even though it was not a 1989 Upper Deck Ken Griffey Jr. card. I hope Lucien will be hanging on to any of those in his collection…