Catching Up With Collecting: Mark Shaunessy

As I teased last week, Mark showed me around the coolest area of our building for this interview: the game-used department. If you’re reading this, and you’re a sports geek, this is your mecca. Here’s your look behind the curtain at Upper Deck. 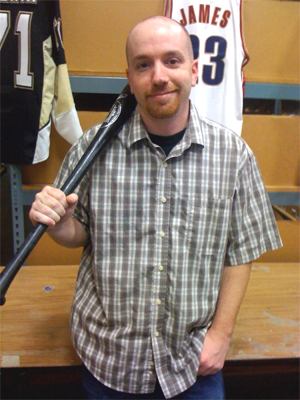 Another day at the office for Mark.

UpperDeckBlog: And what goes on here? There’s all this cool memorabilia, must be a lot of work to keep track of it.

Mark Shaunessy: Basically, what we do is hold the inventory for all the game-used sports memorabilia and cut signatures. That means items go between us and the actual card production, and we need to make sure we’re keeping track of all the pieces and where they’re going. Make sure they go to the right places.

UpperDeckBlog: So this is the storage facility for the cool stuff, more or less?

Mark Shaunessy: Pretty much, it’s like one big place to store all our “used laundry” for our sports guys.

UpperDeckBlog: And this has to be the coolest place in the building.

Mark Shaunessy: Without a doubt, I have the coolest job in the company.

UpperDeckBlog: What would you say is the most enjoyable part of all of this?

Mark Shaunessy: Just some of the items we get in, especially now that we’re starting to try some new stuff. Not just signatures or jerseys, but things like pieces of movie memorabilia too. We’ve recently got a piece of the Golden Gate Bridge and coal from the Titanic.  These are some of the different items we’re putting out there that aren’t just sports.

UpperDeckBlog: What would you say is the coolest item that’s come through here?

Mark Shaunessy: Well I’m a big Bears fan, so when I first got here, we had a signed Walter Payton jersey. He was the reason I got into football, the one guy. For something that isn’t sports related, a few years ago we did signatures of Presidents, and we got in a George Washington signature. That’s something you don’t see too often outside of Washington D.C.

UpperDeckBlog: It kind of feels like it doesn’t get old being around this stuff all the time. I mean there’s a lot of it, and you’re around it all day, but it sounds like there’s always something new and exciting coming in.

Mark Shaunessy: There’s definitely always something new and exciting. My job, being the way it is, some items you can only see so much of, but things stay fresh and exciting with the new stuff that’s always coming in.

UpperDeckBlog: And I know that we’ve given some tours too. Like when Logan Millard won the sweepstakes he visited this area, right?

Mark Shaunessy: Yes, we’ve been able to show some of our inventory to people outside our industry including sweepstakes winners, Boy Scout troops, and even some sports players.

Mark Shaunessy: It’s a lot of fun. Even within the company, there are only a small handful of people even allowed in this area. So to be able to show someone what we do and see their eyes light up is great. Especially if we know who their favorite players or teams are, we can pull out some stuff for them that people don’t normally get to see or touch. If you pull a jersey card, you’re getting a piece of a jersey (which is great), but here we can show you an entire jersey before it gets cut.

UpperDeckBlog: And I see you put together a bit of a spread for the readers, so why don’t you walk us through that a bit.

Mark Shaunessy: Sure. This jersey (on the left) is actually one of the ones Mark Wahlberg wore in the movie Invincible. 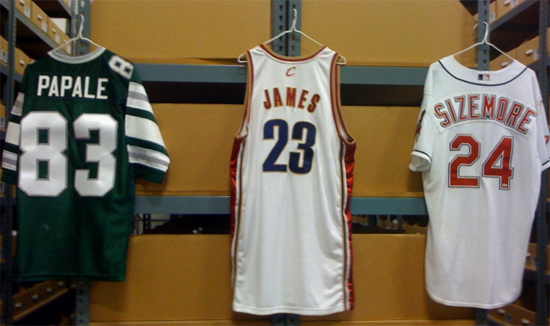 Mark Shaunessy: Definitely. That’s some of the movie memorabilia we’re doing now. This is a headband from Hannah Montana, which we’re starting to cut up for cards. These are pants that Farrah Fawcett wore and signed. 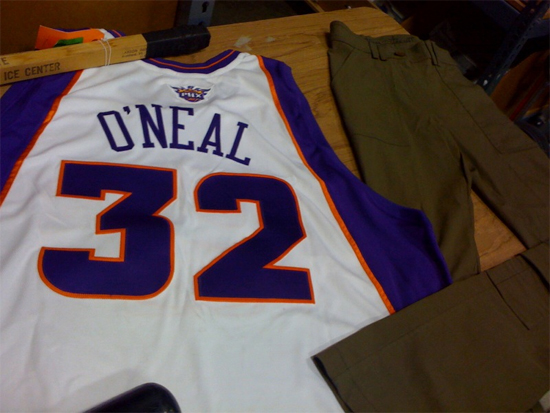 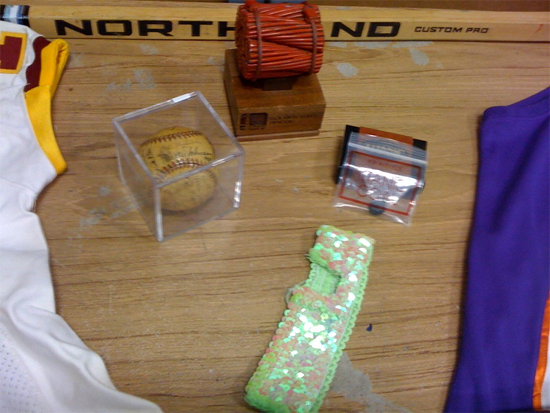 UpperDeckBlog: And you mentioned this is coal from the Titanic? As in the boat?

Mark Shaunessy: It’s actually the Titanic. They went down a few years back and brought back pieces like this.

UpperDeckBlog: And this looks like a Walter Johnson signed baseball?

Mark Shaunessy: It is. What we’ll do here is cut out the sweet spot out of the ball, so you’re not just getting a signature, but the ball it came from too. 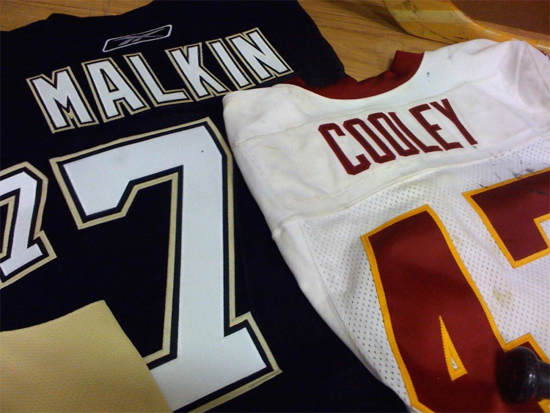 UpperDeckBlog: Really cool, thanks for showing this stuff to us! Anything else you want to add?

Mark Shaunessy: We have a lot of fun down here. It’s great to be on the front lines of how Upper Deck is constantly introducing new items to the collecting world. Every day we get to see something new.


Mark, thanks for the tour! Lucky guy!