Catching Up With Collecting: Gary Tolle

In case you missed the first part of our Catching Up With Collecting series, I highly recommend clicking here to . . . well, catch up with this column itself!

Wow, was that cheesy.

The first individual in the building Chris recommended interviewing on my journey was Creative Sports Manager Gary Tolle, who supervises the whole operation where our photography is concerned. I think most fans, including myself, are guilty of taking these photos for granted. I mean, you look at a card and anticipate seeing a photo of the athlete, so it’s easy enough to not think much about them. But as it turns out, there’s a lot that goes into this process, where the end result is busting open a pack to see a high quality action shot of your favorite athlete doing his thing. And who knew sports photography was a full contact sport in itself? Read on . . . 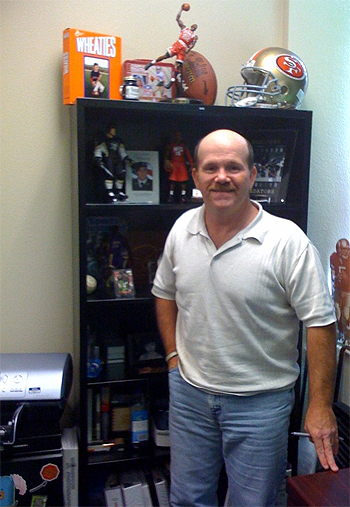 UpperDeckBlog: So what’s your job title, and how long have you been here?

UpperDeckBlog: Wow, that’s impressive! So you’ve seen a lot. If I haven’t been following the industry for the last sixteen years then, what should I know about the photography?

Gary Tolle: The biggest change in the time I’ve been here is that the photos were traditionally shot on film. In 2001, Upper Deck transitioned to 100% digital, which gives us flexibility in what we shoot, and how we shoot it. There are some added cost savings there, with not having to buy film, and the number of images we can shoot. Some of the technology in today’s cameras allow for greater flexibility with low level light situations.

So the switch in technology has been really important. Back in say, 1993, we’d shoot 25 to 30 rolls of film at an event, at 36 frames per roll. Now, it’s pretty much unlimited. For example, at this year’s NFL Rookie Photo shoot, we walked away with almost 17,000 images from one day. 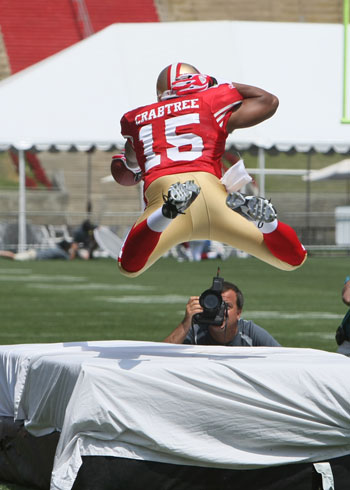 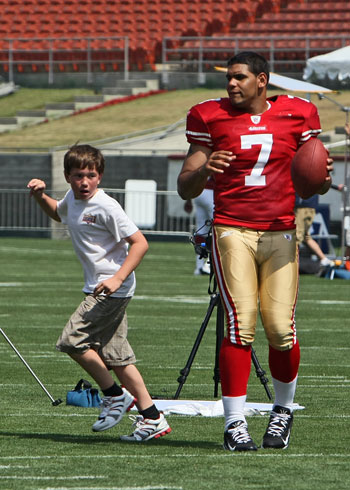 UpperDeckBlog: Wow! And on that subject, I have to imagine that technology allows for both a greater volume of photos, not to mention better quality. How has that changed things?

Gary Tolle: Basically, as far as the quality goes, in transitioning to digital I worked closely with our core group of photographers, and the equipment we used to determine the basic criteria for camera settings. We wanted to optimize the end result for our products. Upper Deck has a very high standard of quality versus a newspaper, or a magazine. Magazines are typically 72 dpi for a resolution, and for a trading card, let’s just say it’s well over 300 dpi.

Back in the day, we’d give film to photographers, they’d shoot, send it to us, it would go to a lab, it would be edited. Now, we’re able to take advantage of the internet, where games are played today, uploaded via our FTP site the same evening, and we can put the photos into product tomorrow. So we’re able to react much faster to trades, call-ups, and events that take place in the various sports we cover.

UpperDeckBlog: How often does that happen, where you’re getting photos so soon after a game or event? That’s a pretty cool element of photography here that I bet most people don’t consider.

Gary Tolle: I would say that on average, a game shot on Monday, I’ll have the pictures in house within three days after the photographers do a preliminary raw edit. If it’s something I need quickly, where they need to come in tonight, we can make that happen. That happens periodically throughout the year, as we always want to have the latest in trades and acquisitions for all of the teams. We need to make sure our product is as current as possible.

There have been times where we’ve been ready to go to press, and someone has been traded, or a rookie gets called up, and we can get the images in house, ready to print and in the product in under 48 hours.

Gary Tolle: It’s possible, but we hope it’s not the norm (laughs). That kind of situation affects lots of groups, not just mine. Pre-press, marketing, and so on. 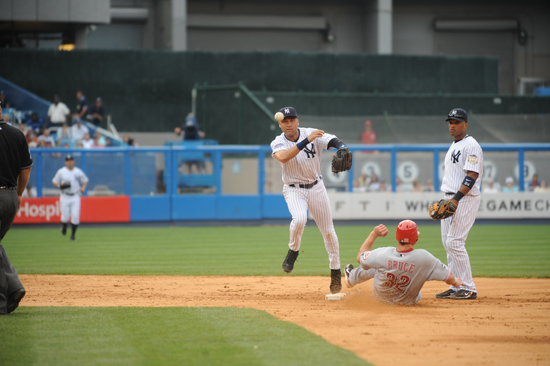 UpperDeckBlog: So when something big goes down like a trade, you’re sort of at the front line it sounds like, and everything filters down from there.

Gary Tolle: Absolutely. In that scenario, I need to schedule and credential a photographer, ensure he’s got travel arrangements made if necessary; the event gets shot, transmitted to our Upper Deck FTP site, then once in house we upload to our digital archive solution. Then the editors go in, pick and crop the image for the card and then on to pre-press for color correction and final assembly, and so on. It can happen within the course of half an hour if necessary.

UpperDeckBlog: So which trade would you say caused the craziest turnaround in your sixteen years here?

Gary Tolle: Oh shoot. You kind of stumped me! Honestly, it’s tough to say, because there hasn’t necessarily been a particular trade that brings things down to the wire, it’s more so the timeframe. Depending on where the product is in development, if they want to include this trade in there, and so on. Because even though we may not shoot it ourselves, we have external sources I can use, depending on the sport, from various stock houses all the way up to the team photographer. So even though I may not necessarily have it scheduled, I can call on my sources or even the team photographer and say, “Can you get me this in an hour?”, depending on the sport and league requirements.

So I can get these pretty quick when necessary, and I don’t think there’s ever been one that’s stumped us, or caused a big whirlwind. My philosophy since I’ve started here has always been, “If a picture exists, I can find it.” That’s paid off, as I’m here sixteen years later (laughs). The three things I can’t control are the weather, who plays the game, and which players get to play. So for games I select in our scheduling, it’s a calculated risk overall. For example, we will often track pitching rotations to have the ability to cover various pitchers when needed.  But things generally work out well for us in that regard. 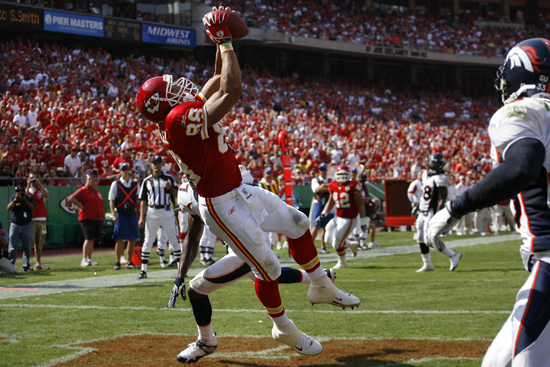 UpperDeckBlog: If I’m taking a look at an Upper Deck card, what should I be looking for in terms of the photography? Is it the quality, the pose…it strikes me as something that fans or collectors might take for granted at first glance, but there’s a lot that goes into it.

Gary Tolle: There’s an awful lot that goes into it. My perspective versus an average collector is obviously going to be different: when I look at a trading card, or even a magazine, I’m looking at how the photo was shot. I’m critiquing the photographer, or learning from the photo and how it was taken. But for the average consumer, or sports collector, they’re looking for action. They’re not necessarily looking at the quality of the image in the same sense that I do. But they’re looking for the action of their favorite players. We are looking to show the game and take the fan down to the field (or ice) level, which is a whole new perspective for them.

But I think the key thing is how the card portrays the athlete. One of our main objectives is showing them in the best light. As a collector, that would be what I looked for in my sports heroes, I want to see them at their best. For example, I’m a huge Joe Montana fan, so when I’m looking at a photo of him I’m looking at his stance, the intensity he plays with that makes him Joe Montana. And I hope we do the same for our collectors’ favorite athletes.

UpperDeckBlog: Very interesting stuff, thanks Gary. Is there anything else you’d like to add?

Gary Tolle: I think one thing that people don’t factor in is the dangers of being a sports photographer, not to mention the skillset involved. Lots of people who pick up a digital camera think they’re a photographer, but the people who work for Upper Deck are true professionals. Not only do they need to be experts in photography, but they also need to be expert sports fans themselves. They need to be able to anticipate the play of the athlete. This is my favorite line: anyone can go to a game and take pictures. It takes a true professional photographer to create photos from the game. I have an elite group of shooters who do just that, and I don’t think it’s appreciated or acknowledged enough.

And the dangers, as I mentioned before: during a baseball game, the line coaches, the hitters, the baserunners, they’re wearing helmets. The defense has fielding gloves in hand, totally focused on the ball. But we’ve got a photographer on the first or third base line, primed to get a line drive right to the head or even take out his camera. I mean the primary lens we use costs about $9,000. So they’re sitting there with a camera that costs about $14,000 total, and a line drive comes right at them. Or in football, you’re on the sidelines and a 200 pound linebacker can take you out if you’re not paying attention. So I don’t think people appreciate that side of things: I’ve had photographers hit by baseballs, pucks, you name it. Even the most experienced shooter can take a hit, because they are constantly looking for that spectacular shot.

It’s dangerous. It’s a coveted job, but I don’t think people really understand the risk a sports photographer takes, and you add into that the skillset that’s needed. These days, you can put the average camera on “automatic”, and it can take some pretty shots. But these guys have to constantly anticipate the game, know the characteristics of the players and determine the best shot to take while also ensuring proper exposure and focus for the shot.If  you’ve got a guy at first, the photographer needs to know if he’s known for stealing, who’s hitting, who’s pitching. And on top of all that, you need to always worry about safety in the back of your mind. They need to be well versed in the sport, and I think all these elements go largely unnoticed. 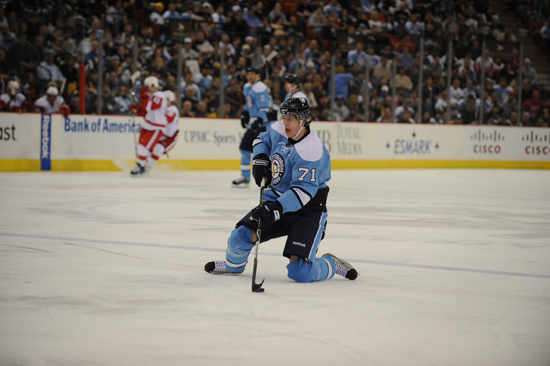 
[…] case you missed the first parts of this series, I previously met with Chris Carlin and Gary Tolle, in an effort to catch up to where the sports collectibles industry is in 2009, and where […]