Do Not Fear Injuries, For They Shall Renew Your Fandom

I’m sure the following is an experience most sports fans can relate to, but it’s never hit me personally more than this 2009 Mets team: sometimes, it’s more fun to watch your B-Squad than your stars. In this case, some of my strongest beliefs as a fan are being challenged, but I couldn’t be happier about it. Allow me to explain.

Following the 2000 Subway Series (where the Mets went up against the Yankees), things more or less went downhill for New York’s National League team. Mo Vaughn and Robbie Alomar are often cited as the two biggest failures of this Steve Phillips administration, symptomatic of a larger problem. The talent on the field couldn’t win, despite the team’s fairly substantial payroll. This all came to a head in 2004, when the team was sniffing an unlikely playoff berth and decided to “go all in”, trading top prospects for Kris Benson and Victor Zambrano: notoriously, fireballing lefty Scott Kazmir was traded for the latter. It didn’t work, and by the end of the season, it was decided that a massive change was needed.

Enter General Manager Omar Minaya, and he decided to rebrand the franchise immediately, signing Pedro Martinez to a four year deal. Carlos Beltran followed a few months later. Most fans knew the team wouldn’t contend in 2005, but a winning record was a step in the right direction. 2006 featured more top talent coming in with Carlos Delgado, a legit closer in Billy Wagner, and a still productive Paul Lo Duca. That season ended in a NLCS Game 7 that’s too painful to describe here.

In 2007 the team brought in . . . Moises Alou and Luis Castillo? Still wasn’t enough, as we endured the first “collapse”, where a playoff berth was denied on the last day of the season. And in 2008, Uncle Omar brought us all Johan Santana for Christmas, but there were no playoffs to be had for the second year in a row (again, decided on the last day). So in 2009, we wisely threw more money at fixing the bullpen in the form of Frankie Rodriguez and J.J. Putz.

Here’s what I’m getting at- in the last five years, the following All Star talent has come to the Mets from elsewhere: Pedro, Beltran, Delgado, Wagner, Lo Duca, Alou, Castillo, Santana, Rodriguez, Putz. And to show for it? One playoff appearance. 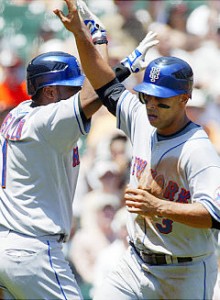 Now I’m not a spoiled fan, and if you ask me what I want from my team, I’ll flatly tell you: to at least contend every year, and let the chips fall where they may. I have no issues with paying top dollar for the best players, especially if you’re a big market team with needs at a position, and tickets to sell. That’s the way it goes. But the interesting thing about 2009 is that it seems as if every day, another player is going on the shelf: Reyes, Delgado, Putz, Oliver Perez, John Maine, Beltran, not to mention prior injuries to guys like Church. The star power of the team has been more or less decimated, and we trotted out this lineup yesterday:

Does this look like the lineup for a baseball team with a $149 million payroll? I think not. They won though, clawing and scratching to score runs and prevent them. But here’s the best part: fans are loving this team. After months of lamenting the injuries and the team’s fate, it seems we’ve finally conceded that what happens will happen. There’s no longer any expectation or feeling that a playoff berth is obligated. It’s actually kind of freeing, in a way: the sort of “cheer and simply have fun watching the team” vibe that Yankees fans will never get to experience.

What helps the most though, and I’m trying to say this without sounding cliche- this B-Squad version of the team plays with heart. It actually hurts me to say this, because I’m the kind of fan who likes to see cold, hard facts. Give me a player with a high OBP any day, and you can keep your intangibles. Generally speaking, if I can’t see a trait a player has in a quantifiable way, I dismiss it. Given the choice between Albert Pujols’ amazing talent or David Eckstein’s legendary “scrappiness”, I’ll take the former over the latter. Every. Single. Time. 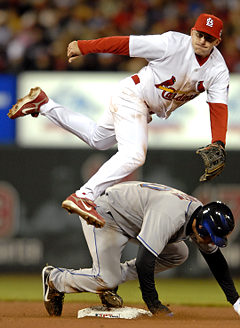 If you hit lots of home runs, get on base and can play adequate defense, I could care less about your attitude, unless you’re making life miserable for the players and fans around you. For example, Adam Dunn was the scapegoat for many years in Cincinnati, because he “didn’t play with enough heart” and struck out too much, all while routinely hitting 40 monster home runs and getting on base at a .380ish clip. As if we expect stolen bases and small ball from a 6′ 6”, 240 pound player? On the other side of the coin, when fans or journalists talk about how a certain player is worth a lot because he’s a “leader” or “plays the game the right way”, I scoff. 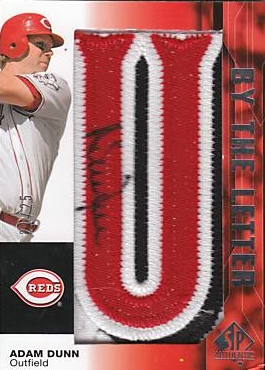 But this B-Squad Mets team is changing my perspective, at least a little. While I love Jose Reyes’ talent, Alex Cora’s leadership and positive attitude are helping keep morale high (and hey, a .387 OBP doesn’t hurt). I miss Carlos Delgado’s ability to get hot and hit game changing home runs, but Daniel Murphy’s obsessive relationship with the batting cages and improving his game helps ease the sting. Luis Castillo may have dropped that pop-up a short while ago and contributed to one of the most embarrassing losses I’ve seen, but he’s now playing with added drive and fire, and has made a number of spectacular plays in the field since. Gary Sheffield, after being released by the Tigers right before the season started, is now playing with a chip on his shoulder to prove them wrong at age 40, all for minimum league salary. Omir Santos? Not even a blip on our radar in Spring Training, and now a fan favorite who keeps coming up with clutch hits. And David Wright, the only active position player “star” left on this team is finally assuming the leadership role he couldn’t grab while the veteran stars were in the clubhouse.

So there’s absolutely no way the level of talent on this Mets squad is equal to their massive payroll. And while I won’t go so far as to spout a cliche that might make both of us cringe like, “But you can’t measure the level of heart on that field”, there’s something to be said for how they’ve changed my perspective. The guys with less natural ability are getting it done by working that much harder, and it’s a blast to watch. And hopefully, when the stars do come back from their injuries, that approach will remain intact.