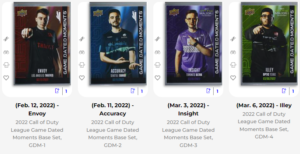 Firstly, these ARE physical cards, they just take some time to be printed. For the Overwatch League™, two moments are from each week of play are turned into Game Dated Moments cards. The Call of Duty League™ had two moments selected from the three weeks of qualifiers and two from each Major tournament. There will also be Game Dated Moments for the playoffs and Grand Finals, or Champs for each league.

Game Dated Moments cards are available for purchase for one week only at a limited number. If you happen to miss a week, there is a chance to trade with another collector on the e-Pack site. For some insight into trading, check out This Guide for information!

As previously mentioned, due to the nature of Game Dated Moments they are not immediately available to be sent home. Cards can take 8-12 weeks until they are able to be shipped home due to the printing and processing times. Once cards are printed and scanned in, the digital rendering is replaced with the scan of the physical card. Once you see the scanned image, that is also a sign that the card will soon be available for shipping. You will also see a blue rectangle with an up arrow underneath the card in your collection. You can use This Guide to help you with the shipping forms. 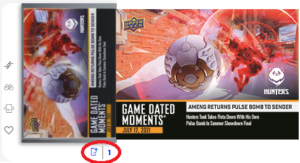 Collecting at the start of the season means you can collect towards an achievement. Achievements are basically “bonuses” for collecting on Upper Deck e-Pack®. When you collect all the cards in a certain set, you can “redeem” for an avatar, card, or other type of collectible. Previously with Game Dated Moments there have been some amazing autograph cards as achievements. 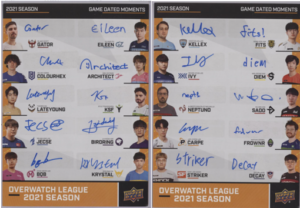 For the Call of Duty League™ Game Dated Moments, there will be 20 total cards throughout the season. If all cards are collected, they can be redeemed for the 4-card 2022 Championship Team Auto Achievement set. This achievement set will feature the Los Angeles Thieves, who recently won the title.

For both Game Dated Moments achievement cards, the cards need to remain in your account until redeemed. This means either the weekly cards or the League Standout Achievement cards for the Overwatch League. Once they have been redeemed and the R is shown, they cannot be used for another achievement. That means you can send them home without worrying about missing an achievement! Hopefully you will be able to partake in the achievements in the seasons to come!

Cards can only be used for an achievement once, then show a yellow tab with a white R once redeemed. For more information on Achievements, you can take a look at This Guide.

Hopefully this gave you a better understanding of the Game Dated Moments trading cards and achievements.

In short: These cards are limited print and available for a week only. They usually take 8-12 weeks before ready to be shipped home. When notified, you can transfer and ship your cards home. There are achievements for collecting all cards, such as player Autograph cards. Cards will need to remain in your e-Pack inventory until redeemed in order to complete the achievement.

If you have any additional questions, feel free to ask here or on Twitter @UpperDeckEsprts! For other resources, there’s also This Blog Post full of resources.