We’ve recently realized that there was a wording error on the Ghost-Spider Main Character Level Up power from her Level 1 card, which appeared in the Webheads Issue. 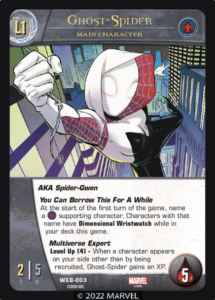 It is printed as:
Multiverse Expert
Level Up (4) – When a character appears on your side other than by being recruited, Ghost-Spider gains an XP.

The effect will now be played via the below errata:
Multiverse Expert
Level Up (4) – When a character appears on your side other than by being recruited from your hand, Ghost-Spider gains an XP.

This was the design intent all along, and the card was originally playtested this way. It was always meant to work with her You Can Borrow This For A While power.

This change takes effect immediately, both in the current Vs. System 2PCG featured format and beyond. The wording can also be found on our official Card Wording Document resource.