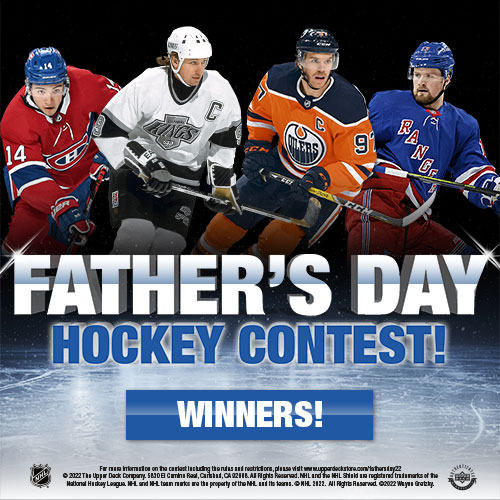 This Father’s Day Upper Deck wanted to give back to all the father figures who deserved something extra special. Over the last three weeks we have received numerous entries from wives, children, and loved ones, nominating their father figure and highlighting their Upper Deck Authenticated hockey memorabilia collection for the chance to win awesome Father’s Day prizes. Four winners were chosen to receive exclusive Upper Deck prize packs. One Grand Prize Winner was chosen to receive a prize pack along with a Wayne Gretzky autographed print valued at $3,000! Though all entries were deserving to win, we have chosen 5 winners to receive this honor.

You can read their stories and explore their hockey memorabilia collections below! Scroll to the bottom to see the GRAND PRIZE WINNER!

#UDFATHERSDAY My husband @Sacker09 deserves to win because this is his first father’s day. He has helped me so much as our little girl grows and the love shared between the 2 of them is just so heartwarming. She already has him wrapped around her little finger. @UpperDeckSports pic.twitter.com/BZURz5XLIk

I nominate my father for the Upper Deck Father’s Day Contest because he has been collecting UDA pieces since the 90’s! Whether it be the Crosby Phenomenal Beginning card set or the inscribed McDavid jersey, UDA pieces hold a special spot in my fathers collection. #UDFathersDay pic.twitter.com/WStY24aeKN

I’m nominating my kids’ father, @The_Jodster for the #UDFathersDay contest, as he’s been collecting cards and memorabilia essentially since leaving the womb, & shares his joy with our 2 (*soon to be 3) kids at every opportunity! pic.twitter.com/MDmdKlwkZn

If you missed out on the contest, don’t worry! You can shop all our hockey memorabilia HERE!

Natalie Devin
Privacy Policy | Do Not Sell My Information |
Copyright © 2022 The Upper Deck Company.  All Rights Reserved.  All trademarks, logos, trade dress, service marks, and images displayed on the website belong to either The Upper Deck Company or a third party and may not be used without prior written consent of their respective owners.
Back to top
We use cookies on our website to give you the most relevant experience by remembering your preferences and repeat visits. By clicking “Accept All”, you consent to the use of ALL the cookies. However, you may visit "Cookie Settings" to provide a controlled consent.
Cookie SettingsAccept All
Manage consent