We’re back with our latest Vs. System 2PCG preview! There are plenty of new and returning characters to show you this year, but first we must uncover secrets of the Nexus beings living among us now, in Crossover Volume 4!

Let’s begin with a prime piece of real estate located in the heart of the Louisiana swamp land. 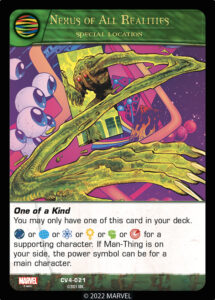 The Nexus is guarded in the comics by its stalwart protector: Man-Thing, including this one from Vs. System 2PCG: S.H.I.E.L.D. vs Hydra. 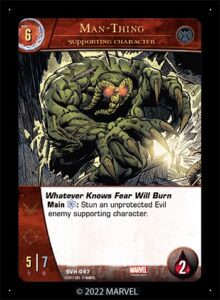 Thus, if Man-Thing is present on your side, he will escort even your most powerful characters wherever they may need to be! 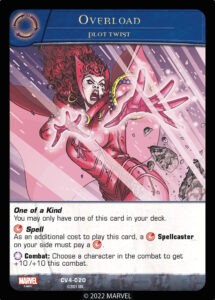 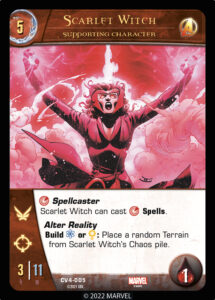 Behold, the Wielder of Chaos Magic, the Scarlet Witch! Even reality shall bend to her will.

Her Chaos pile contains 10 Terrain cards. This pile is Variable (that is, you choose the Terrains, and you can choose cards from multiple Terrain sets) and Private (only you can look at it during the game). Place the Terrain just as if you were doing so at the start of the game. There is no limit to the amount of Terrain that can be in play.

With all this power at her fingertips, where will she take us? Perhaps to a Concealed Cave, a Deserted Cabin, down a Hidden Path to some Forgotten Artifacts? 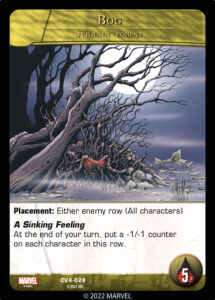 Ah… Back where we began I see…

Forest Terrain are destructible (they have a

There’ll be more to learn about Terrain once Crossover Vol. 4 releases! Until then, check in with us next time to see if any man or Beast can invent a way out of this quaint quagmire.


What is nexus of all realities doing exactly?


It’s able to fuel a superpower via any of those symbols, but only for supporting characters by default.
Effectively, it’s another “wild” location you can have in your deck, giving it extra flexibility compared to locations only able to provide a single type of symbol.