Legendary: Doctor Strange and the Shadows of Nightmare Card Preview: Enter the Astral Plane for a Demonic Bargain

Though their arcane rituals may be complete, other new possibilities and keywords await Doctor Strange and his allies! Transcend present knowledge with our final preview to learn of the other powers at their disposal, and what they’ll be up against from the Netherworld and Fear Lords alike. Peer beyond the veil of your own reality, and gaze further still into Legendary®: Doctor Strange and the Shadows of Nightmare!

Demons offer gifts of power with a dark price, hoping to corrupt the souls of mortals. These deals with the devil are especially corrupting to the powerful and arrogant – the humble are more likely to escape with their souls intact… 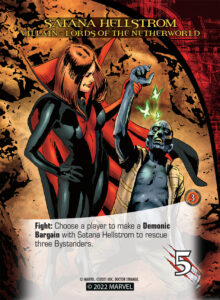 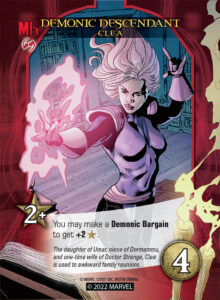 Some Villains say things like “Fight: Choose a player to make a Demonic Bargain with Satana Hellstrom to rescue three Bystanders.” 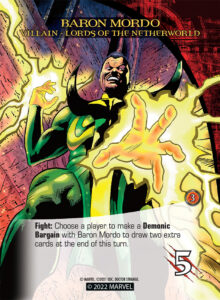 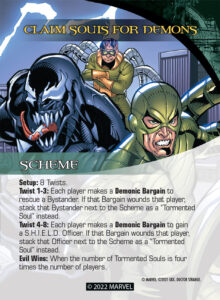 Some cards have you choose which player must make a Bargain for a benefit. When this happens, think carefully about how many cards in your deck cost 0. If most of your deck is still 0-cost cards, it may be worthwhile to seize the power of the Demonic Bargain for yourself! If your deck has lots of high-cost cards, then it may be wiser to choose another player to make the Demonic Bargain instead…

When you choose a player to make a Demonic Bargain, that player cannot decline.

The Fear Lords are cruel demons that move themselves and others beyond the physical world to a realm of pure, psychic energy. There they prey on the human psyche, evoking nightmare and terror! 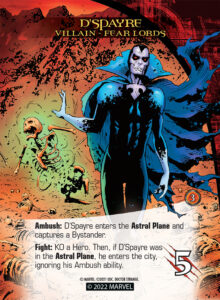 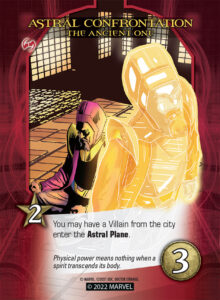 Some Villains say things like “Fight: If this Villain was in the city, it enters the Astral Plane.” 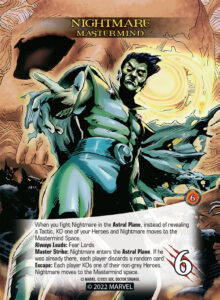 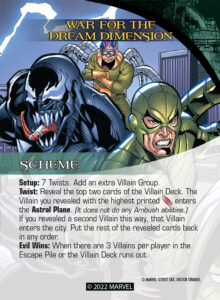 The Mastermind “Nightmare” can also enter the Astral Plane. While there, he can only be fought with

. If he escapes the Astral Plane, do all the normal effects for a Villain escaping the city. Then, do the Escape ability written on Nightmare, which moves him to the Mastermind space.

Legendary: Doctor Strange and the Shadows of Nightmare has phased into the material plane! Buy it Now!