Legendary®: Doctor Strange and the Shadows of Nightmare Card Preview: Rituals and Artifacts most Arcane

Doctor Strange has long battled hideous fiends rushing to tear his body apart. Now new demons descend to rend his mind and claim his very soul. To face them, he’s called on his most powerful allies and Artifacts, from Wands of Watoomb to the Eye of Agamotto. All this will be in your hands to command in Legendary®: Doctor Strange and the Shadows of Nightmare! Many sorcerers never escaped these dangers – will you?

After appearing in Legendary®: Secret Wars Volume 1, Doctor Strange returns to defend Earth from horrifying and otherworldly threats. This Master of the Mystic Arts will have his adroit hands full with demons and spirits, and must challenge them with his own arcane aptitude.

For today’s returning Keyword, we’ll be studying up on some of the Sanctum Sanctorum’s most notable Artifacts, bringing back this mechanic from Legendary®: Guardians of the Galaxy, Fear Itself, and Heroes of Asgard.

Through many quests, Doctor Strange and his colleagues have uncovered sorcerous objects of staggering ability. These are represented by mysterious Artifact that persist from turn to turn.

When you gain an Artifact, put it in your discard pile like any other Hero card. When you draw that Artifact later in the game, you may play it in front of you and use its effects. This means you “control” that Artifact. At the end of your turn, when you discard all the cards you played that turn, the Artifacts you control stay in front of you. 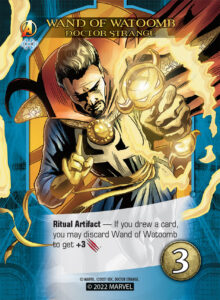 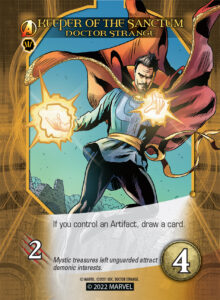 While Artifacts may be familiar for some Legendary® players, Doctor Strange and the Shadows of Nightmare introduces a new twist to these befitting their oracular origins – Ritual Artifacts. Marvel’s sorcerers invoke Rituals of awesome power, anchored by mystic talismans. These also still count as heroes and use the same, familiar Artifact rules but with some new twists! 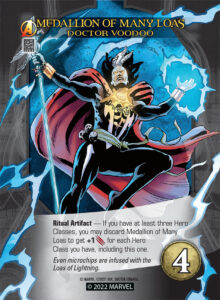 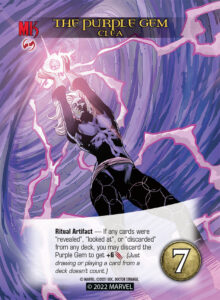 Legendary: Doctor Strange and the Shadows of Nightmare brings its supreme magical aptitude to your collection! Shop Now!

we want reprints of Secret War Vol 1, Civil War, Captain América 75 th, X-men, because the expansions are not available and we want to play them. Please, please, please!

Will this come with a promo?

Hey there! No promo planned for this expansion. If you haven’t seen, we’re currently offering one with our Legendary: Messiah Complex Deluxe Expansion.