When it comes to any competitive card game, it’s often not until a card or keyword makes it out into the world that we’re able to see situations that need a little extra clarity. Thankfully our players have stepped up, and we’re happy to provide answers based on our VS. 2PCG Symbiotes Arc to you today.

We received a question about how Hybrid and AKA work together, and wanted to take the opportunity to correct some clerical errors in production.

This question does a great job of clearly stating the issue to lets start there:

“If I have a single Hybrid in my KO pile, does that allow me to play another Hybrid via ‘A Composite Symbiote’? Hybrid has the names of all of those characters referenced in ‘A Composite Symbiote’, and his power doesn’t specifically state ‘Cards with the title…’, so, as phrased, I believe the answer to the above is Yes.” 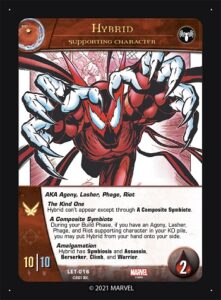 The design intent for Hybrid was that you have to have four, physical cards with those names in your KO pile. Hybrid can certainly count as any of those names due to AKA, but he’s only one physical card.

Because of this unfortunate oversight, we need to tweak his wording just a little bit to support this idea:

“During your Build Phase, if you have four supporting characters in your KO pile with the names ‘Agony’, ‘Lasher’, ‘Phage’, and ‘Riot’, you may put Hybrid from your hand onto your side.”

So if you had, for example, two Hybrids, one Lasher, and one Agony in your KO pile; you could put a Hybrid from your hand onto your side. 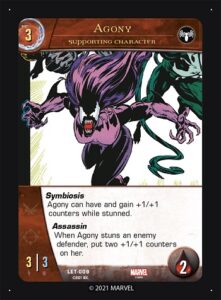 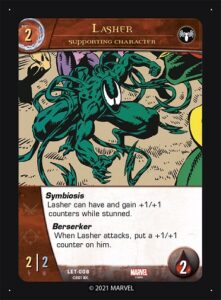 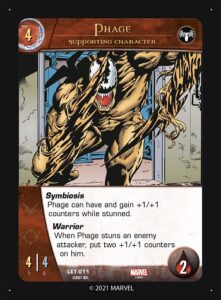 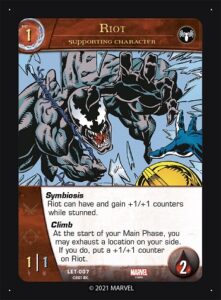 The other mishap was one caught immediately by the community: Anti-Venom. 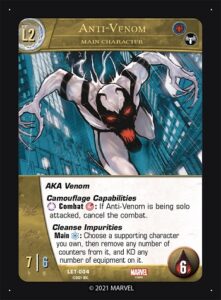 The Main Character has “AKA Venom”, and this important feature was unintentionally left off of the Supporting character. 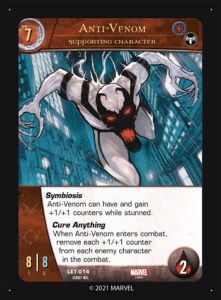 This character should also read : “AKA Venom”

All these changes will be reflected in the Official Card Wording when we roll it out, but until then the correct way to play them is as above.

We also have an update on how various piles should be disclosed, revealed, and handled during organized play.

Piles are considered to be a part of your registered deck.

All cards in all piles must be listed, by pile, on your deck list. They must also be on the table with you when the round begins.

Cards from different piles cannot be mixed together. However, you can stack all of your piles on top of each other, or put them next to each other in a deck box.

Once a pile is announced (whether it’s public or private), it must be separated from all other piles such that players can see it.

For more information about when a pile gets revealed, please see the Out of Game Piles Document.

Thank you to all who brought these to our attention, and to the entire VS. 2PCG community.